Forgiveness has been in the news a lot lately. Most prominently, a black man hugged and forgave a white police officer in court. The police officer had shot and killed his brother.

An image of Ellen Degeneres and former President George W. Bush sitting next to each other at a football game went viral on the internet. Two people with such differing values and beliefs enjoying each other’s company gave hope to a more civil and forgiving culture.

Earlier this month, Immaculee Ilibagiza, a Rwandan genocide survivor, gave her personal testimony on how to “Love Your Enemy.” She spoke to a packed crowd of more than 6,000 Catholic middle and high school students from the LA Archdiocese at the annual Christian Service 4LIFE event sponsored by LIFEsocal at the Microsoft Theater in Los Angeles.

How can a woman like Immaculee — whose parents and two brothers, along with almost one million others were brutally killed during the Rwandan Holocaust — be so joyful? How can she forgive the people who killed so many?

Cramped in a 3x4 bathroom with seven other women, Immaculee couldn’t speak to anyone for three months, for fear of being discovered. She spent her time praying the Rosary 27 times a day and the Divine Mercy chaplet. She also read the Bible given to her by a pastor who risked his own safety to hide the women.

Immaculee told the crowd that when she heard the killers outside the door, “I had to choose between two voices. ‘Open the door, or keep praying?’ ” She looked for a sign, asking God if the killers knew where she was hiding.

“The killers searched everywhere. They even opened suitcases. The men turned away when they got to the bathroom,” Immaculee said.

In the Bible, she read: “Pray for your enemies.”

As she prayed the “Our Father,” at first, she skipped over “Forgive us our trespasses, as we forgive those who trespass against us.” But then she realized that was wrong. These are Jesus’s words, so they are true.

Immaculee prayed over the word “forgiveness” many times.

“I learned that God is on my team. I learned the power of love. It is the lack of love when things start to break down,” said Immaculee.

“We can love people by how we look at them. I can change myself. Forgiving is healing,” said Immaculee. 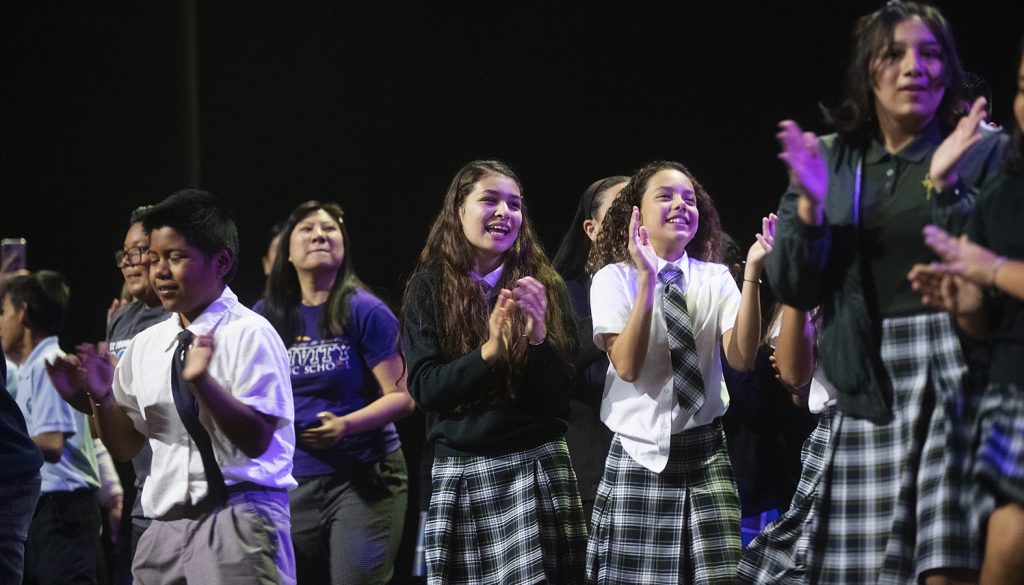 After Immaculee’s testimony, she spoke in a more intimate setting with high school students who had the chance to ask her questions. She shared important life lessons she had learned while surviving the holocaust.

She told the young adults, “Don’t be afraid to speak the truth. Love people even through their weakness; don’t do wrong to them, and be watchful over yourself.”

How can a woman who came from a small, poor country, who grew up in an even smaller, poorer village get on the New York Times bestseller list? Immaculee told the high school students that her survival and success is all due to praying the Rosary.

“Love is the most important thing; just seek God. If you believe you are a child of God, the sky’s the limit,” she told the high school crowd.