Guilty pleasures still make us guilty. The Liam Neeson “Taken” franchise is such a form of entertainment I have dabbled in. Guilty. From the rash of sequels at least I’m not alone. Why do movies like this attract us?

Maybe it’s because watching Neeson track down all those bad guys who kidnapped his daughter — or whichever family member this guy seems to have such a difficult time keeping track of — gives us a false sense of justice.

Movies have no monopoly doling out desensitizing product that taps into our baser selves. Television has been doing it for decades. We may be passively watching in our living rooms, but we participate when we shrug and grab a snack after watching some TV reporter thrust a microphone in front of a grieving mother to ask how she feels after her child was hit by a car.

If it’s a particularly awful story about a child being hurt and the culprit is still on the loose, television helps fan the outrage flames and we become like the mobs in old monster movies with torches and pitchforks demanding “justice.”

What we are really demanding is vengeance. It’s the same emotion we entertain ourselves with in all those Neeson movies where he hunts bad guys and does unspeakable things to them. It makes us feel good, in the most superficial and fleeting way.

None of this is television’s or the movie industry’s problem. Just as long as people keep walking to the box office or buy the products advertised on our favorite television shows, all is good in the pop culture universe.

But if God can make something good out of the foibles and faults of King David or the adulteress, he can certainly pluck grace out of something as banal as popular culture. This past week he did that in a most massive way.

I had heard of the story; remember I watch too much TV. It played in the background of daily life: A policewoman in Dallas somehow stumbled into her neighbor’s apartment, thought she was in her own apartment, and shot the neighbor thinking he was an intruder.

The policewoman, Amber Guyger, was white; the neighbor, Botham Jean, dead on his own floor in his own apartment, was black.

The story had law enforcement, racial bias, murder, everything that makes a story “good.” The facts of the trial are unimportant. They are unimportant because unless you were a juror or a member of the Texas public who sat in that courtroom every day for the entirety of the trial, you really don’t have an informed opinion.

Television, as it is apt to do, fixated on the drama of it all, but was unprepared for what happened next. It was time for that most wrenching of criminal trial rituals: the victim impact statements. This is where family members describe how much pain they are living through because of the actions of a perpetrator.

Guyger was weeping, alone, and friendless in the world, when Brandt Jean, the brother of the murder victim got his chance to speak. He wanted Guyger to know he forgave her and hoped she would let Jesus into her heart, then he asked the judge if he could hug Guyger.

They met in the middle of the courtroom, penitent and forgiver. Guyger hugged Jean like her life depended on it. Maybe it did. If this was a Neeson “Taken” movie, the “justice” would have been quick and brutal. But as fleeting as that artificial nod to our broken need for vengeance is, witnessing the most profound and important act a Christian can perform is lasting. 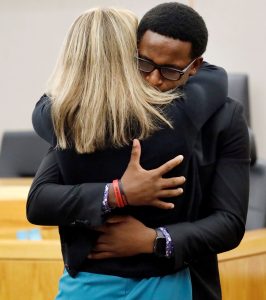 You could not find another person with more pain and justifiable anger in this case than the brother of someone who was so senselessly murdered. Yet, only his forgiveness could ever give Guyger the spark that just might lead to that journey with Jesus that Jean sincerely hopes she takes.

News cycles will rotate on and the story will be forgotten, but anyone who claims to be a follower of Jesus should commit the sight of Jean and Guyger hugging to their frontal cortex. The day may come to us when we will be in one position or the other. And even if TV cameras aren’t present to intrude on the scene, let’s pray we are all up to the task.