In February 1992, I wrote about an event for The Tidings on divorced, separated, and widowed Catholics, presented by the Office of Family Life, of which Father Jim Gehl was then director.

In the article, several individuals criticized the Church’s annulment process, comments which elicited a letter to the editor, co-signed by Father Jim, that took me to task for not offering a more balanced view. My editor told me not to worry, but the criticism still stung.

A few days after the letter appeared, in the former lunchroom of the old archdiocesan Catholic Center on Ninth Street, Father Jim and I were seated at the same table. It was our first face-to-face meeting and, given the circumstances, I was a bit on guard.

But then Father Jim looked at me, smiled slightly and said, “You know, I hope the letter we wrote about your article didn’t cause any trouble for you.” I smiled back, and said no, it hadn’t.

“I’m glad,” he said, with a small sigh of relief. “Because your article was very well done, and we didn’t want our comments to reflect poorly on you.”

A few weeks later, I saw Father Jim at a Marriage Encounter event. “How are you doing?” he asked with a big smile and warm handshake. “It’s so good to see you.”

And with that, a friendship that spanned 30 years was launched — and would have continued, had this priest of the Archdiocese of Los Angeles for nearly half a century not gone home to Jesus Feb. 22 after a long illness. 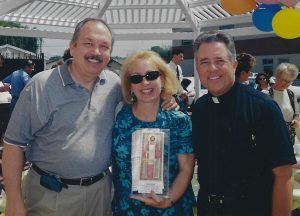 In nearly 40 years of parish and diocesan ministry, I have met many good, decent, and gifted ordained religious and laypeople. But I’ve met no one who exemplifies the warm, welcoming presence of Jesus in our midst more than Rev. Msgr. James C. Gehl, native of Chicago, child of Canoga Park, and servant of God’s people.

A man who saw goodness in everyone, who treated everyone with respect, who appreciated their gifts and talents, who believed in celebrating life. A man who ultimately embraced his own illness with the relentlessly positive approach that he brought to all aspects of his ministry.

At The Tidings, I was blessed to connect with Father Jim many times. Each time he was kind, gracious, concerned about my well-being, and always warm and welcoming — as he was with everyone.

In early 1999, a funeral Mass was celebrated for my mother-in-law’s dear friend, a parishioner at St. Joseph the Worker Church in Canoga Park, where Father Jim was pastor. In attendance were friends and co-workers of the deceased’s son, many of whom were neither Catholic nor particularly religious and, therefore, not entirely comfortable in a Catholic church.

Which is why Father Jim, at the start of the Mass, offered a sincere welcome to all, “especially those for whom this may be their first time in a Catholic church. We are happy to have you here.” As the liturgy continued, he explained what the various rituals were all about, why they were done, and how they connected to rituals in other faith traditions — everything and anything he could do to show respect for his guests, to show them they belonged.

Because Father Jim — like the Jesus he tried to model — knew that hospitality mattered. If you won’t welcome strangers, how can you evangelize them?

After the funeral several non-Catholic friends and co-workers of the deceased’s son told him, “Your priest really made us feel welcome and at ease. You could see he really cares about people.”

My family experienced that caring presence regularly during the years my wife worked for Father Jim as initiation director at St. Joseph the Worker. He presided at our 25th anniversary Mass with the gentle-but-joyous spirit that exemplified his ministry. He made sure spouses and family were always included at staff events. And even after being named a monsignor in 2000, he remained “Father Jim,” friendly and accessible to everyone.

Years later, when my mother-in-law’s health precluded her from attending Mass at St. Euphrasia Church in Granada Hills, where Father Jim was now pastor, he made sure parish ministers brought Communion to her, and that OASIS volunteers were available to tend to her needs. Their home visits were a highlight of her week.

When she died in 2014, Father Jim presided at her funeral Mass, and invited our family to St. Euphrasia’s annual Mass of Remembrance in November, where candles were lit in memory of those from the parish who died during the prior year. It inspired my wife to begin a Mass of Remembrance at our own parish.

Now, it will be Father Jim’s turn to be remembered by those who knew him, and not simply in Masses of Remembrance. And I believe that he is being warmly welcomed throughout God’s house of many rooms — and that he is greeting all he sees, friend and stranger alike, with a warm embrace, a big smile and the words, “It’s so good to see you!”

Someday, it will be so good to see him, too.