Paul J. O’Reilly, Ph.D., was sworn in as the fifth president of Thomas Aquinas College (TAC) on Oct. 22 at the school’s Santa Paula campus.

O’Reilly, 61, graduated from TAC in 1984. He is the first alumnus to serve as the school’s president. At his inauguration, he promised to carry out his new responsibilities with “great vigor and fidelity.”

The inauguration began with a special Mass in honor of St. Pope John Paul II on his feast day, celebrated by Los Angeles Archbishop José H. Gomez and Bishop William Byrne of Springfield, Massachusetts, where TAC has a second campus. 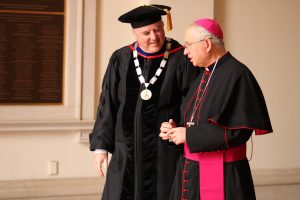 In his homily, Archbishop Gomez reminded O’Reilly, and the gathered faculty and staff, of the school’s vocation. “The Lord entrusts you with this sacred responsibility: to feed and tend these young hearts and minds, to give them knowledge of the truth. Only in … Jesus Christ can we flourish in this world and know the love that never ends.”

Born and raised in Northern Ireland, then Canada, before coming to TAC, O’Reilly knows well the vocation to teach — he returned to the college in 1989, after attending graduate school for philosophy at the Université Laval in Quebec, Canada. He spent 22 years teaching before accepting the role of vice president for development in 2011.

“The students of TAC are remarkable in their willingness and ability to pursue a demanding curriculum,” he said in his remarks following the inauguration ceremony. “The pursuit of truth requires discipline and method, it requires guidance and docility, it requires the right dispositions of the soul.“ O’Reilly promised to “re-dedicate” himself, and the rest of the staff, to the school’s “unique mission” to pursue truth in learning.

“If Thomas Aquinas College goes the way of the world, then I have failed,” he told B.C. Catholic in an interview before his inauguration.

O’Reilly and his wife, Peggy, also a TAC graduate, have 12 children, many of whom have attended — or are currently attending — the college. 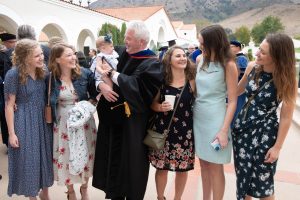 O’Reilly with several of his children and his granddaughter. Five of O’Reilly’s 12 children are TAC graduates, and one is currently attending the school. (Courtesy Thomas Aquinas College)

TAC was founded in 1971 with a great-books-based curriculum and a mission to provide a private Catholic education at the college level. The four-year college accepts about 100 students each year, keeping enrollment numbers around 400 for the entire school. In 2019, TAC opened an East Coast campus outside of Boston. Part of O’Reilly’s presidency will be focused on ensuring the success of the newer campus, while still maintaining the college’s mission.

Echoing St. Pope John Paul II’s famous lines, “Do not be afraid. Open wide the doors for Christ,” Archbishop Gomez emphasized the importance of Catholic education in today’s society: “You are called to raise up a new generation of apostles, who aren’t afraid to open every door for Christ.”