It’s only 10 a.m., but the sisters of the Missionaries of Charity at St. Emydius Church in Lynwood have already put in a day’s worth of work.

In the last six hours, they have prayed — both together and on their own — and gone to Mass before splitting up to tackle an array of daily household chores: preparing breakfast, making beds, cleaning the convent.

Depending on what day of the week it is, they will spend the rest of it either on the streets seeking out the homeless, teaching catechism to parish children, attending to the needs of the infants and expectant mothers living with them in their convent, picking up food donations from food banks and local businesses, or distributing that food to the needy of their neighborhood.

It has been like this for more than 30 years at the convent next to St. Emydius, founded in 1989 by Mother Teresa of Calcutta, the future saint who visited several times — including a two-month stay.

Those on the receiving end of their charity agree on their most remarkable trait: how happy they are.

“They do so much, they’re always busy, but they’re always smiling,” said Karlneesha, who has lived at the convent since September. “They’re just so nice.”

Karlneesha, who doesn’t look a day over 20, is expecting her first child, due on Christmas Day. When she talks about the sisters, she seems rather amazed not only by what they do, but how they go about it. Especially since, she admitted, she has not been the easiest person to be around lately. 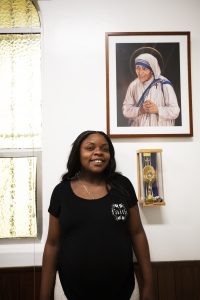 Karlneesha went to live in the St. Emydius convent after one of the sisters answered her phone call. She is expected to deliver her child on Christmas Day. (Victor Alemán)

“This is my first pregnancy, I’m actually a nice person,” Karlneesha said, her voice now rising over the giggles of several of the sisters sitting nearby.

“But sometimes my mood swings will be all over the place (the giggles grow); it’s like a monster jumped out of me (giggles become guffaws). I’m like, if this is pregnancy, I don’t want to be pregnant anymore (flat out laughter).”

The sisters laugh because, first, Karlneesha is gifted at making just about any statement funny. Take, for example, her realization that her child, destined to celebrate a birthday and Christmas at the same time every year, means that she has to make peace with “being broke every Christmas.”

But they also laugh because the idea that Karlneesha is facing issues or problems they haven’t seen before is, well, laughable.

Since the convent was founded, the sisters have given shelter to countless pregnant women who have struggled with a host of complications presented by a world that, at times, seems set up to make their lives difficult; a world that can bring fear not only for them, but for the child they are carrying.

“This is a safe place,” said Michelle, who has been at the house since November and is due to give birth in April. “You can’t find many safe places when you’re by yourself.” 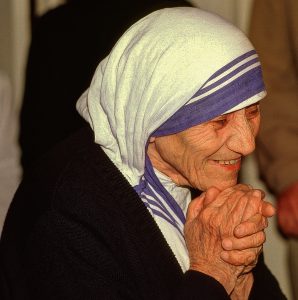 St. Teresa of Calcutta, or “Mother Teresa” as she is best known, in a photo by Angelus photo editor Victor Alemán during her 1991 visit to Los Angeles. She founded and spent time at the convent where the Missionaries of Charity still live in Lynwood. (Victor Alemán)

The sisters, dressed in the familiar white and blue habit made famous by Mother Teresa, are quick to produce a stack of photo albums containing page after page of photos of smiling women. In many of their photos they are holding their babies, since women are welcome to stay at the convent after giving birth.

“One year, we had eight ladies here with eight babies, all girls,” said one of the Lynwood nuns, Sister Chandrika. “They said that no boys were allowed!”

If Karlneesha thinks her mood swings are hard on the sisters, imagine the decibel level of multiple babies expressing themselves. And yet, says another nun, Sister Xaveria, the crying makes the sisters “happy.”

“In the crying there is joy,” she said. “The crying moves the ladies to help each other, it’s beautiful to see. If there is no one to help, then we take care of it.”

Taking care sometimes means throwing a baby shower for those women who have no family nearby. Their ability to draw joy from any situation, whether it’s feeding the community through their weekly Friday food giveaway outside the convent, or simply sweeping the kitchen floor, amazes just about everyone — even those who have made a similar commitment to service.

“They reach out, to teach the gospel, to prepare people for sacraments, to provide food and comfort, they provide a wonderful instrument for evangelization in the whole Church,” said St. Emydius Church pastor Father Rigoberto Rodriguez. “They serve everyone through their ministries. They truly have the same spirit as their founder.”

Pausing, he then added as seemingly everyone does, “And they are so nice. I love them to be here.” 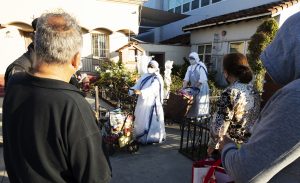 On Fridays, the sisters give out food donated by food banks and local businesses to the needy. (Victor Alemán)

And they are here for everyone. Neither Karlneesha or Michelle are Catholic. Neither is Alicia, a young woman who experienced homelessness for several years, and recently gave birth to a baby daughter who has since passed away.

She came to the sisters hoping to “heal,” and has found herself feeling “closer to God.”

“He’s real, he’s here, I can see it here, in the way I’m cared for, the way they care for everybody,” said Alicia.

For years, Alicia “was around a lot of people who did a lot of drugs, and I wanted to get away from all that. Here, I’m just trying to dodge obstacles, and I feel like he is watching over me through the sisters. It’s made my belief that much stronger.”

Similarly, Michelle found herself on her own: no family in the area, feeling vulnerable, lost, and emotionally “just broken.”

“It was like I was on my own, I had to figure it out. They gave me the option to get it together and figure it out. And get closer to God. He is our everything, he gets us through it all. Just to be able to get on my feet, to be able to take care of myself and my child.”

That feeling of safety is built on a spiritual structure of prayer and work that helps the sisters meet the material and spiritual needs of those they encounter.

The convent’s walls contain aphorisms from Mother Teresa such as, “The child is a life from God, created in the image of God, created for great things, to love and to be loved.”

But they also contain reminders for the convent’s residents, with housekeeping advice: “If you open it, close it. If you turn it on, turn it off. If you borrow it, return it.” 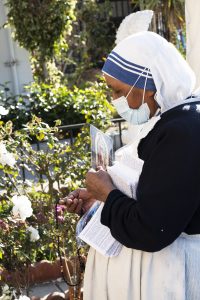 On Fridays, the sisters pray the rosary before giving out food to the needy. (Victor Alemán)

Their work extends far outside the convent. Just ask associate pastor Father Cesar Guardado, assigned to St. Emydius since being ordained a priest six months ago. The sisters take him along when they hit the streets, making him available to hear confessions.

“They are absolutely fearless, they go anywhere that they think they can help,” said Father Guardado. “They have no fear of sickness, no fear of someone others might think of as dirty.”

Father Guardado admitted he was intimidated the first time he went on one of their street missions. One moment they were preparing strangers for confession, he recalled, the next they were sweeping the street.

“They are relentless and yet they do it all with a smile,” he remarked.

Sister Chandrika extends her own care to the 29-year-old priest, too, telling him a joke every day and encouraging him with Mother Teresa’s famous quote: “Saints are never tired.”

The reach of their efforts is all the more impressive when you consider that the sisters employ practically no new technology. No internet or social media. No televisions in the convent. When a reporter shows up to do a story about them, there’s no website to refer them to —  just a single page of college-ruled notebook paper on which, neatly printed in ink, is a brief description of the order’s mission.

“Through all we do, we want to help them experience God’s love and care,” it reads. “And many people are touched by the little things we do. Sometimes a ‘Hello’ and a smile is all they need to experience that love.”

Rather than holding them back, the lack of reliance on technology seems to make the sisters more available to the ones who need them most. Both Karlneesha and Michelle, for instance, said their decision to come to the convent was owed in part to a simple answered phone call.

Both had called 211, a resource for essential community resources, and each had been given the name of Missionaries of Charity and glowing reviews. 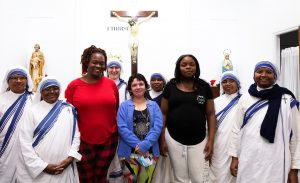 Michelle (center) has been living with the sisters since November and is due to deliver her child in April. (Victor Alemán)

Karlneesha also called in the evening.

“Someone said ‘Hello!’ And I was like, ‘Oh shoot! I was not expecting that.”

The sisters told her to come that Friday, since Thursday is the day totally dedicated to prayer.

“I was like ‘Wow, that was easy,’ ” recalled Karlneesha. “Other places you need so much paperwork, but with them, it was just come on by and we’ll talk.”

It’s that simplicity that not only brings people to the convent, but back year after year, too. This year, the sisters will throw their annual Christmas party, attended by many of those women and children in the photo albums. One of those children is now 18, and returns weekly to help the sisters give catechism class for children.

Though she’s not due until the spring, Michelle said she already understands the hold that this place — and these nuns — have on people. She dreams of one day being able to “give back” because “they’ve done so much for me.”

“They don’t have to, they do it out of the goodness of their heart. It was not an obligation. They made me feel welcomed and cared for.”

Sister Z. John Janice smiled to hear Michelle say those words, but quickly interjected that “we get more than we give. There is a lot of work, but seeing them happy, we are made more happy,” she explained.

Karlneesha said it’s that attitude of spirit, that approach to life that she will take from this place.