Archbishop José H. Gomez has appointed Fr. Brian Nunes as the Archdiocese of Los Angeles’ next Vicar General and Moderator of the Curia.

Fr. Nunes will replace Msgr. Albert Bahhuth, who this year completes his five-year term as Vicar General and Moderator of the Curia. Msgr. Bahhuth will take a one year sabbatical before returning to parish life.

“Msgr. Bahhuth guided the Archdiocese of Los Angeles through one of the most difficult and challenging periods of our history and he did that with grace,” Archbishop Gomez said in a statement Aug. 19. “He is a good leader and a good steward and his administration was marked by his deep pastoral concern for the spiritual needs of the family of God. I am grateful for his service and I will miss him.” 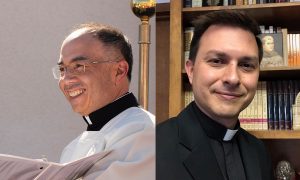 The next Vicar General and Moderator of the Curia for the Archdiocese of Los Angeles will be Fr. Brian Nunes (left). Replacing Fr. Nunes as Vice Chancellor and Senior Director for Ministerial Services will be Fr. Parker Sandoval (right).

Fr. Nunes, who currently serves as Vice Chancellor and Senior Director of Ministerial Services for the Archdiocese, will begin in the role starting September 1, 2020, Feast of St. Vibiana, patron saint of the Archdiocese of Los Angeles. He previously served as priest secretary for Archbishop Gomez and Administrator of Mary Star of the Sea in San Pedro and St. Gregory the Great in Whittier. 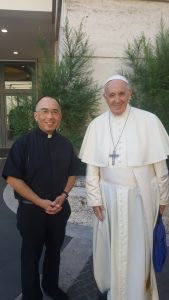 Fr. Brian Nunes with Pope Francis during the Synod on Young People in October 2018. Fr. Nunes was in Rome helping Archbishop Gomez with pilgrims who had traveled from California for the canonization of St. Oscar Romero.

Ordained in 2015, Fr. Sandoval was Associate Pastor at Resurrection Parish in East LA before  his appointment as Coordinator of Adult Faith Formation in the Office of Religious Education (ORE) in early 2019.

In a personal message to the faithful of the Archdiocese, Msgr. Bahhuth thanked them for their support during the last five years, as well as Archbishop Gomez for giving him the opportunity to serve in the role.

“It has been a wonderful learning experience that gave me a better understanding of all the different parts of the Archdiocese and how they come together in service to the people of God,” said Msgr. Bahhuth. 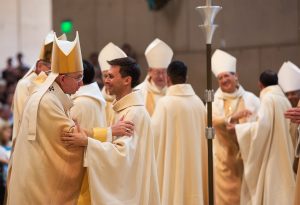 “I was also blessed to meet and work with many dedicated people: the staff of the Archdiocesan Catholic Center, priests and women religious, the lay people who serve on the many archdiocesan boards and councils and the generous donors who financially support the mission of the Archdiocese,” added Msgr. Bahhuth, who replaced then-Msgr. Joseph Brennan as Vicar General and Moderator of the Curia when the latter was appointed Auxiliary Bishop for the Archdiocese of Los Angeles by Pope Francis in 2015.

“I am confident that under the leadership of Archbishop Gomez and Fr. Nunes we will continue to move forward in our mission of building the Kingdom of God and saving souls for the glory and praise of God.”