Members of the Ugandan diaspora in Southern California celebrated the dedication of a tangible link to their country’s Catholic heritage in the San Fernando Valley last month.

The dedication of the new shrine to Uganda’s Catholic martyrs at St. Genevieve Catholic Church in Panorama City on Sunday, June 19 was presided by Archbishop John Baptist Odama, who was visiting from the Archdiocese of Gulu in northern Uganda. Also in attendance were representatives of the Ugandan government, including Thomas Tayebwa, deputy speaker of Parliament in Uganda.

“In Uganda, even the most prominent people show up,” explained Father Desudedit Najja, a priest from Uganda now serving as associate pastor at Immaculate Conception Church in Monrovia.

Their attendance, he added, was “a sign that what is celebrated in Uganda can also be celebrated here without pressure, without politics.” 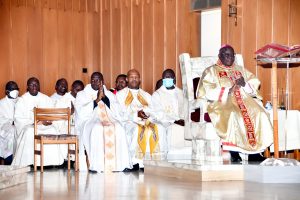 Archbishop Odama was joined by several Ugandan priests serving in Southern California for the June 19 liturgy.

The shrine’s memorial altar houses relics belonging to 22 Ugandan converts to Christianity who were killed for their faith under King Kabaka Mwanga II between 1885 and 1887.

Los Angeles is home to one of the largest communities of Ugandan immigrants in the U.S., and faithful who attended say they value having a place to stay in touch with their spiritual roots.

“It is so important that we have an item of the martyrs, the real blood, the real body, installed,” Daniel Kigoye, chairperson of the Uganda Martyrs Celebration, told Ugandan news station NTV. “Not just the picture, not just the altar, but an item, a particle of the Ugandan martyrs. It’s so important for the faithful when they come and get that blessing.”

The shrine also includes new carvings of the Uganda martyrs, carved from wood of the Mvule tree — once held sacred by indigenous Ugandan religions — by Brother Fred Musazi, a member of the Banakarori Brothers in Masaka, Uganda.

The dedication ceremony was the fruit of six years of work and planning. The idea of installing the altar was first proposed in 2016, during Archbishop Odama’s first visit to celebrate Los Angeles’ Uganda Martyrs Day. He was serving as the president of the Uganda’s bishop conference Episcopal Conference at the time, and proposed the creation of a permanent memorial to the Uganda martyrs, with support from Oliver Wonekha, then Ugandan ambassador to the U.S.

St. Genevieve’s pastor at the time, Father Alden Sison, offered the space in his parish, given that the church is widely considered the Ugandan diaspora’s spiritual home in the LA area. 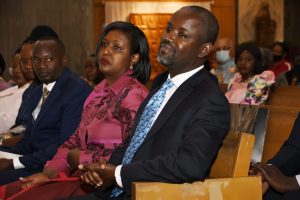 Still, Father Najja insists that the new shrine is not just for Ugandans, pointing out that it has drawn local Catholics from diverse ethnic backgrounds since its dedication.

“Like all the saints that we have in the Catholic Church, we celebrate them wherever you are, in Arica or in any other continent,” Fr. Najja said. “We need the same kind of zeal, same kind of determination [as the martyrs] not to lose our faith in this time when it is challenged by the secular world.”

Father John Bosco Musinguzi, a Ugandan priest serving as hospital chaplain for the U.S. Navy in San Diego, expects the new memorial will have a serious spiritual and social impact in the Archdiocese of Los Angeles.

“The Shrine will be a place of pilgrimage for devotion, prayer for spiritual renewal to grow in a life of union with God, veneration, solace, and visitation to intercede for physical and spiritual healing through Uganda Martyrs – and Eucharistic celebration,” he said. 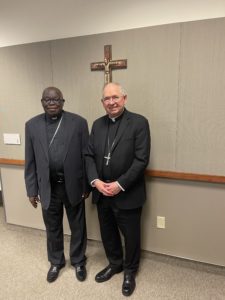 He also hopes it will allow Catholics of different backgrounds to become more familiar with Ugandan culture.

“The people of Los Angeles need to know that the people of Uganda as a country love our Uganda Martyrs,” Father Musinguzi explained. “Their courage and heroic faith became a foundation for Uganda to be a strong Catholic country” which has been blessed with plentiful vocations to the priesthood and religious life.

Perhaps most importantly, the Uganda Martyrs Shrine offers a home for all those who draw inspiration from the lives of the Uganda martyrs to pray, to congregate and to celebrate.

“Next year, on the third Sunday of June, we do it again,” Father Musinguzi said. “Mark your calendar.”