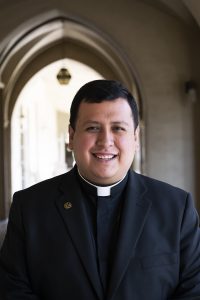 Like many others about to take this step, Patrick Ayala has a lot of people to thank for getting him to this point, especially his mother and father, who “raised me in the faith.”

But, like so many, he’s also thankful for those people who appeared, seemingly at random, during a critical moment in their lives. In Ayala’s case, that person came in the saving presence of Sister Sarah Goggin, SSMO, who helped deliver that faith back to him.

Ayala first thought seriously about the priesthood when he was just in the fourth grade at St. Ferdinand School in San Fernando. 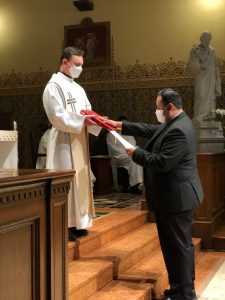 Deacon Ayala making his profession of faith and oath of freedom before priestly ordination.

“I remember my fourth-grade teacher teaching us how to pray in class, meditating, and taking time after lunch to close our eyes and do a little bit of contemplative prayer,” he said. “With my mom raising me in the faith every night, teaching me to say the Our Father, I started to hear the call.”

The call grew stronger whenever priests visited the school to engage kids in community services like preparing food for those in need. “I looked at that and said, ‘I would love to do this for the rest of my life.’ ”

But childhood can be a trying, sometimes brutal time in a person’s life. It was for Ayala, who experienced bullying, who had come to believe that he “didn’t have any hope or chance or any friends.” Things were so desperate that it caused him to first question his faith and then to stop practicing altogether.

It was at this point that Sister Sarah appeared, ostensibly as his social justice religion teacher, but in actuality, as someone who would remind him of his great worth to God and others. 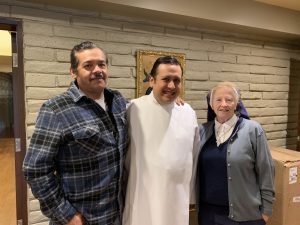 Ayala with his father, Patricio, and Sister Sarah Goggin, SSMO.

“She saw a child that was seen as nothing, that I was not going to amount to anything,” Ayala said. “She saw something special in me. From that first day I encountered her, she helped build me up, she brought me back into the faith, she had me confirmed. She introduced prayer, reintroduced service and that tug was still there. I have enormous gratitude toward this sister who helped me and who gave this kid who was told he was never going to amount to anything confidence and strength.”

And now, at what is no doubt a critical moment in so many people’s lives, he wants to be there as Sister Sarah was for him.

“A lot of churches are struggling right now. Schools are struggling, and families are struggling. But as this crisis, God willing, passes soon, we want to be there to help rebuild, to help invite people to come back to the Church and to continue those efforts that a lot of priests have been doing during this time, to bring that hope, to remind them that, yes, things happen in life, but Christ is eternal, and he will continue to remain here, regardless of the circumstances and situations. I want to bring that message of hope to them.”