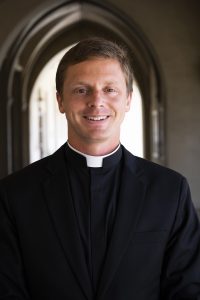 While ordination signals the end of one journey, it also marks the beginning of a new one, and this is key to Michael Masteller. While much attention is placed on a man saying yes to a vocation, he believes it is equally important to renew that affirmation regularly.

“It’s that continual saying yes wherever the Lord wants to go in our life,” he said. “Saying ‘Yes, Lord, you can go here. Yes, Lord, you can bring your light to this dark area where I haven’t shown anyone, or I don't want to.’ ”

Masteller grew up in Santa Paula, the second of four children in a Catholic family. He studied just a few minutes away at St. Thomas Aquinas College, where he double majored in theology and philosophy (a decision that would later shave a year off of time in the seminary). 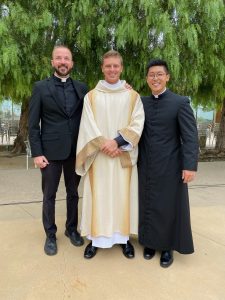 The seeds of his vocation began to grow while teaching high school theology after college. Struggling to find a real direction in his life, he eventually found himself at a discernment retreat at a Milwaukee seminary. But even there, he felt disconnected and fearful.

“I was searching, wandering, I didn’t really have a clear path before me. But I had a sense that the Lord might want me to be a priest. Still, I was very afraid. I remember just going into my room and I opened up this pamphlet, and inside there was this quote from Pope Francis, saying, ‘I don’t care who you are, where you’ve been, what you’ve done. I ask you, I beg you right here, right now, just open your heart to Christ.’ ”

When he did, he said all the fear that had welled up in him simply went away.

“The light of Christ just filled my heart,” he said. “It just banished these deep fears that I had, it took away that darkness and filled it with hope and with a future and a path. At that moment, I knew. It was like, ‘Lord, I’ll follow you wherever you want me to go.’ ” 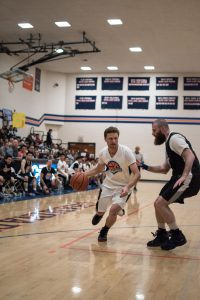 Masteller drives to the basket at the 2020 Priests vs. Seminarians basketball game last February, where he led Team Seminarians in scoring.

Having said yes that first time, Masteller finds himself devoted to living that yes every day. If there’s one thing he’s sure of, it’s that prayer can bring about the kind of circumstances that change lives. It did for him.

“The Lord can slowly melt any kind of cold or ice that’s around our heart. And so I think that that’s the greatest thing that I would say in my life, was just a certain determination and faithfulness to prayer, as basic or as empty as it might seem, the Lord can take that and transform it.

“That’s been my experience, that Christ doesn’t work from the outside, pulling or pushing, he wants to enter and to move from within.”