Kamil Ziolkowski’s journey to the priesthood is an ode to joy.

The 27-year-old native of Poland described himself as a “JP II vocation,” JP being his countryman, St. Pope John Paul II, who once wrote that the Church, the saints, and the Virgin Mary provided “the model, the strength and the joy needed to live a life in accordance with God’s commandments and the beatitudes of the Gospel.”

For Ziolkowski, who was 11 when the pope died, the full impact of those words hit him years later as a seminarian, while serving as a hospital chaplain.

“I would see how the priest assists families, assisting patients in moments of sorrow: illness, death, anointing of the sick,” he said. “And then I would see how they serve in moments of joy: the birth of a child, couples that came to the priest to bless their love and marriage, to be there when their children are born, to be baptized, to be there when the children make their first Communion.” 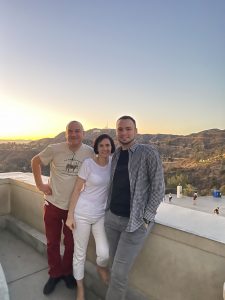 Ziolkowski with his parents during a visit to Griffith Observatory.

It was then he realized that to find the strength to journey with people on their pilgrimage toward Christ, to serve them in “moments of joy and moments of pain, to help people with those moments in life, all that lead to the altar of Christ,” one must serve with joy.

In fact, he said anyone considering a vocation should first consider what he calls a “test of joy.” “Ask yourself if you’re joyful about it. Imagine yourself a priest, imagine yourself a sister; if it brings you joy and happiness, that’s a first step.”

Ziolkowski said he suspected as early as the age of 14 that he was called to the priesthood. In high school, he studied Latin and philosophy, preparing himself to enter the seminary after graduation. He credits a close spiritual adviser with helping him discern what type of priest he wanted to be.

Raised near the German border, Ziolkowski spoke both Polish and German, but when he came to the United States to pursue his vocation, his journey was slowed by the fact he spoke no English. He spent a year learning his third language at the University of Chicago.

He would continue his studies in Southern California, attending St. John’s Seminary in Camarillo, a place he described as immediately feeling like “home.” 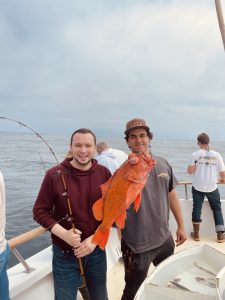 Ziolkowski (left) during a sport fishing trip off the California coast.

Perhaps because of the struggles he initially faced when he came to the U.S., Ziolkowski said he felt himself drawn to serve the immigrant community, which he has done at St. Alphonsus Church in East Los Angeles.

“It has been a beautiful experience,” he said. “I learned my fourth language (Spanish, after Polish, German, and English).

“This experience has shown me the beauty in multiculturalism, how we encounter Christ in different devotions, in the different faces that faith may have, based on the culture we come from and the culture we are in right now.”

Vocations, he said, are all connected with “struggle, decision-making. Once you make the big decision [to follow a vocation], every day after that you need to make a small decision [to continue] all over again,” he said.

“There are struggles, but it is overshadowed by joy. You’re in the right place at the right time and there’s such joy because you see that you are receiving a gift. We don’t deserve it, yet we are called to participate in this priestly ministry with Christ himself. That joy of participating, the joy of Christ’s priesthood, truly overcomes all the struggles that have to be made along the way.”