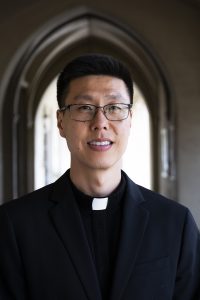 One of the reasons Francis Kim wanted to become a priest was to help out those in need, the people “the world doesn’t see as being like the rest of us.”

He said this desire to help came from growing up with the examples of several diocesan priests who showed him what it meant to simply be a good and decent human being serving those who are often overlooked or minimized.

“We live in a world that Pope Francis calls the ‘throwaway culture.’ Who is going to be there to help the most vulnerable in our world, where increasingly we’re becoming, ‘I will only help you if I get something in return.’ ” 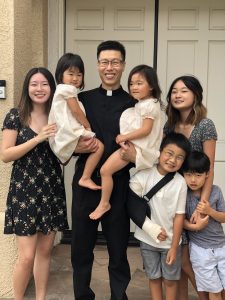 Kim with his family.

Kim wants to be that person to help, which makes it surprising that when it came time for him to discern his vocation he shied away from being a diocesan priest and instead looked in other directions, including becoming a Trappist monk. Eventually, he remembered how much he admired the priests of his youth and his path suddenly became clear.

“I decided I grew up with diocesan priests in my life and they had a very positive, good influence, not only on me, but also my family. So, why not the diocesan priesthood?”

Now that he is at the end of a long journey, he finds himself, in many ways, going back to where he began, wanting to emulate the priests of his youth.

“The primary reason is just to help those in need, whom the world doesn't see as being like the rest of us. Jesus says in the Gospels, when asked, ‘When did we serve you?’ He said, ‘What you did to the least of these, you did unto me.’ And that rings so true in our world today.

“When I think of [the priests] who were such positive role models, they did that. For the longest time, I thought, ‘Oh, that’s just what they do.’ But as I’ve grown older, I realize they’re not doing it for money or success. They’re doing it because that’s what love is.” 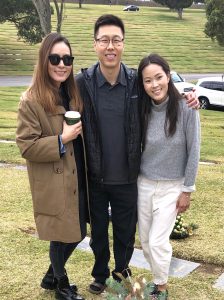 Kim with his family.

And, it turns out, love has its own rewards. Kim recalls one of his first assignments as a seminarian was going to help the developmentally disabled in Camarillo, what he looks back at as one of those “most fruitful experiences of my life,” and one he says he would very much like to repeat once ordained.

“Just being with them. They gave me more than whatever I gave them. And even after a few years when I went back to visit, some of them still remembered my name. So, I’m looking forward to doing something like that as a priest.”