That Daniel Garcia is becoming a priest — soon to call Downey’s Our Lady of Perpetual Help Church his home parish — is really no surprise to anyone who’s known him. As early as sixth grade at St. Paul Elementary School, people saw that he was called to something, one teacher telling him, “Danny, I see Jesus in you.” 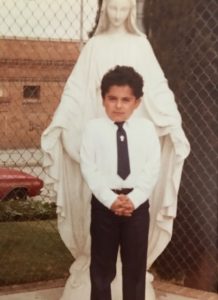 But sometimes those who are called are the last to realize it. Looking back, Garcia said he can clearly see the signs of him being drawn to service, whether as an altar server assisting at weddings and funerals, working in a rectory, or acting as a lector during Mass.

Still, he had a hard time seeing what others did, wondering how anyone “could see Jesus in me.”

While he did get involved in Catholic ministry, it was in education, first as a teacher then vice principal, and finally as principal at St. Malachy School in Los Angeles. But despite what he had accomplished, despite all he had served, he still felt himself wanting and prayed for a sign. It arrived while he slept.

“This figure was smiling at me and said, ‘Come to me, everything’s going to be OK,’ ” he said. “When I woke up, I was filled with grace, I was filled with this feeling of love. And that was the sign for me that I had been asking for. And I knew in my heart that God was calling me to something greater.”

That the sign came while he slept doesn’t surprise Garcia at all. The world is full of distractions, he said, distractions that make it hard to focus on God’s plan. Entering the seminary provided him with a necessary state of quiet, one that allowed him to separate himself from the daily stresses of life.

If it sounds as if he viewed the seminary as a retreat, far from it. He said he saw the seminary as a “hospital for the soul,” one where men could be broken down and then “molded again with the help of the Holy Spirit in how God wants us to be molded because we’re going to be working for him and with him.” 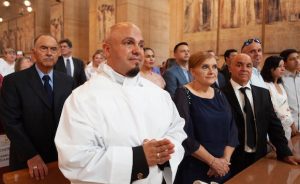 Daniel Garcia with his family at his deacon ordination at the Cathedral of Our Lady of the Angels. (Submitted photo)

Part of being broken down was learning that it was not “about me anymore,” that it was only when he surrendered that he could see what others had for years.

He said it’s important for anyone, whether considering the seminary or simply attempting to live God’s plan, to quiet down and be patient.

“Just listen to God, you know, most of the time we love talking,” he said. “We need to be in silence so that God can speak to us in that silence. God will if you open your heart. God will place the answer for you.”