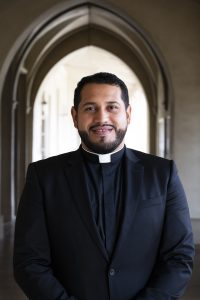 It was as he was about to graduate from high school that Cesar Guardado first heard the voice asking if he had ever considered the priesthood. Like so many, he balked at the thought, but not for the typical reason of having made plans of his own. No, he said he simply didn’t feel “worthy of that.”

Growing up in El Salvador, he lived among those who bore the scars and trauma of that country’s bloody civil war. His mother and father, who had spent most of their childhoods in Honduran refugee camps, told him of Jesuits who were always there for them, “shepherds to the heart because they would walk with the people in exile.”

He saw it in his everyday life, how priests were always there, living the Gospel through their actions.

“During that time, I could see the priests being so present to us,” he said. “I had so much respect for them as men. They pretty much rebuilt my entire town. After seeing such great men, like Father John [Kortina] who was one of the surviving Jesuits from the Jesuits murdered at the University of Central America, I thought I could never be a priest like them.”

At age 9, he immigrated to Omaha, Nebraska, Guardado eventually came to believe that he should at least follow the calling and see where it led, which, in this case, was Los Angeles. Though the move was at times daunting — many more people, much more diversity — he also found that he gradually was connecting with that active part of his faith.

He had always loved the Mass, often attending by himself when growing up in El Salvador, and the fear of not being up to the task of bringing the joy, beauty, and comfort that priests had brought him began to recede. 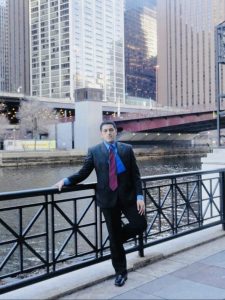 Guardado during a visit to Chicago before entering the seminary.

Guardado hopes that his first assignment at St. Emydius in Lynwood will be an opportunity to do for others what the priests of his youth did, to “speak for those who cannot speak.”

“I want to walk with those who are in need. Especially coming out of the pandemic, there’s going to be a lot of struggle, especially in poor communities. If I could ask God for something, it would be to place me wherever I’m needed most, with the poor and those who need a priest. I think that would be my only request of God.”

His trepidation has now turned to an enthusiasm to get started. He says he now views the priests of his youth as inspirations who’ve provided him with a map to help people with the everyday struggles that often test the spirit.

“My inspiration comes from seeing the priests be part of the social struggle and the spiritual struggle of the people, and being elevated by them to God,” he said. “Reminding them that it doesn’t matter where we’re at, whether in poverty, in our loneliness, in our tragedy, God is still present. And so, that is, for me, an inspiration always. And I think it will continue to be, for me as a priest, what moves me, just having those witnesses in my heart.”