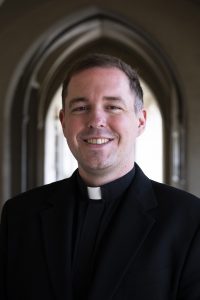 One thing Andrew Hedstrom would like to focus on, as he prepares to begin his ministry, is rebuilding a sense of community in daily Catholic church life. That life has been adversely affected by the pandemic, of course, but Hedstrom believes COVID-19 only shined a spotlight on an issue that had been festering for years.

“We’ve been having conversations in my class about this, building the community life of the church, the parish should be the communal center,” he said. “One of the things that the pandemic has really shown is that this has been going on for years and years; this lack of community in the parish. So, trying to figure out how to address that and fix that.” 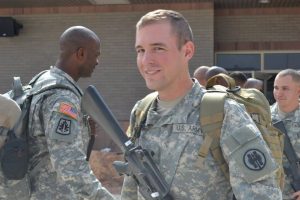 Hedstrom in 2013 at Fort Bliss in Texas, before deploying to Guantanamo Bay.

Though he recognizes there is an issue, Hedstrom admits he doesn’t have a solution, that he has “ideas, but until I’m at a parish, it’s really hard to settle all that.”

Still, he knows it’s critical for individuals to see the worth of the church and to see their place in it, that it’s important for people to say, “Oh, I do fit here. I belong here and people are going to miss me if I’m gone.”

It didn’t. While deployed in Cuba, he described long, 16-hour shifts alone. Bored, he decided to pray the rosary. Then he began to use the solitude and quiet to pray and talk to Christ. By the time his stint was over, he found himself fully committed to his vocation. 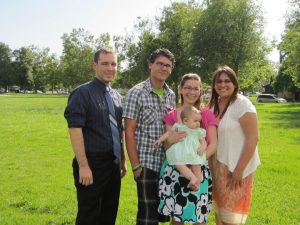 It’s in silence that he believes individual Catholics, perhaps some who have fallen away from church life, can be reached, and through those individuals a community can be rebuilt. Of course, that’s easier said than done in a culture where “our attention is like two seconds before we lose interest and move on to something else.

“If there’s one thing that you could do, it would be to go to adoration, to sit there in silence, even if it’s only five minutes at first, even if it’s only seven seconds. If that's all you can handle, good. But then the next time you go, which should be the next day, go for eight seconds, then go for a minute, then go for five and then stretch it until you’re at that hour for making a daily Holy Hour where it’s not hard. It’s actually like you find that there’s something missing when you’re not there for that hour with God. That Holy Hour, that time with Christ, is the most important thing you can do in any vocation, whether religious priesthood or married life.”