As the human toll of the coronavirus (COVID-19) pandemic grows throughout California, a partnership between the Archdiocese of Los Angeles, the St. Vincent de Paul Society of Los Angeles, and the Knights of Columbus launched in mid-March, is playing a vital role in helping the most vulnerable members in Los Angeles, Ventura, and Santa Barbara counties.

“We just want everybody to know that the Church is here for you,” said Kathleen Domingo, senior director of the archdiocese’s Office of Life, Justice and Peace, who is heading up the emergency partnership.

As of April 6, there were more than 15,200 Californians with confirmed cases of the coronavirus (the actual figure is presumed to be around double the number) and 351 deaths from the virus.

Depending on the needs expressed, callers are directed to parish food banks and pantries in their neighborhoods, application-based resources for financial assistance for families (namely, the Cardinal McIntyre Fund and the Catholic Campaign for Human Development), and — in the case of homebound elderly and infirmed — help to get groceries, medicine, and other basic necessities delivered to their doors.

But the Hearts to Service hotline offers much more to callers during the state’s “stay at home” order, according to Domingo.

“This work is not just service, not just Christian charity. It’s also a form of evangelization. We’re telling people that ‘You really matter to us, and we’re going to do everything that we can do to help you and your family through this dark period.’ ”

Domingo says the range of people who’ve called the hotline for help “run the gamut.”

“Some are mothers with children now at home trying to cope, and we can tell them where the closest grab-and-go lunch place is, set up by the Los Angeles Unified School District. Some 40 of our Catholic schools are also involved in that. And we have a whole group of elderly people calling us also.”

Others, she says, “have more extensive, deeper needs.”

“Maybe it’s even just to talk to someone, and that’s also part of the service: to listen,” Domingo told Angelus. “They might be worried about losing their job or something. So we’re not a call center of strangers. We have live people who will answer your call from your own Catholic community.”

Often, that listening is followed not just by information, but by praying with the caller or making sure to ask about any other needs before the call ends. “We’re less of a referral service than we are a family,” she insisted.

Domingo acknowledged the challenges that have come with rising to meet people’s needs at a time when church buildings and offices are closed. Nevertheless, she’s impressed by the numbers of people who’ve volunteered to help, whether from the archdiocese, St. Vincent de Paul or the  Knights.

Tasks include running the hotline, stocking parish food pantries, delivering to the homebound, and calling to stay updated about which (and when and where) community resources are open.

“We are not abandoning you just because we’ve had to lock our doors,” said Domingo, describing the message the initiative is trying to get across. “We’ve kind of gone underground, and we’re a much stronger network with our partners because of it.” 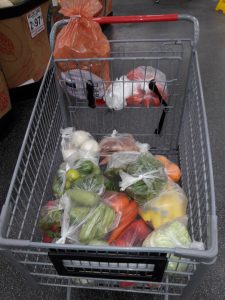 Groceries purchased for a homebound senior at an LA-area "El Super" grocery store in March. (Archdiocese of Los Angeles)

“Hectic, hectic, hectic,” replied David Garcia, executive director of one of those partners, the St. Vincent de Paul Society of Los Angeles, when asked how things on his end have been going in light of the new initiative. “But that’s OK,” he was quick to add.

If any social-service agency in the three-county Archdiocese of Los Angeles is in a good position to help some of the most vulnerable people — especially the elderly and homeless — concerning the coronavirus pandemic, it’s the local St. Vincent de Paul Society.

The organization’s “Conferences of Charity” are already in many local parishes, and home visits are a regular part of the society’s mission to serve the poor and homeless of any religion. And it already has a solid base of more than 2,000 Vincentian volunteers.

“To be honest, we still really don’t know what to expect with the coronavirus,” Garcia admitted. “But we’re sure that as time goes by, it’s going to increase. So at some point, we may need even more volunteers to help us and the partnership answer the phones, more people to run to the grocery stores, drugstores, and more people to make deliveries. Everything is going to be case by case.”

For clients who can’t pay for the delivered groceries, funds from Hearts to Serve will be used to help, Garcia said.

One challenge is that many of the Vincentian volunteers are seniors themselves, putting them at a higher risk for complications from the coronavirus. As a result, Garcia said the organization will have to get “creative.”

“We’re doing home visits over the phone. At our food pantries, where people usually line up, we’re doing social distancing. And if we do home deliveries, maybe we’ll leave the package outside.”

The society has had to close its two thrift stores in Los Angeles and Long Beach, one of the several local measures that ultimately hurt the working poor, who rely on the stores to furnish their apartments and buy their clothes. And on LA’s Skid Row, the walk-in part of the society’s Cardinal Manning Center is now closed. But the residential, live-in program continues, housing 65 men trying to turn around their lives.

“Absolutely stores will open up again,” said Garcia. “But I won’t open them until I have the support of the governor and the mayor. The society is here to serve the most vulnerable people. So we’re going to continue to do that the best we can. And it makes sense to be in a partnership with the archdiocese and Knights instead of them just referring people to us.” 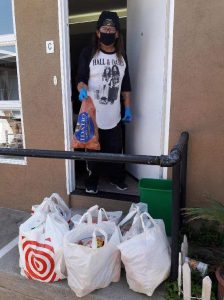 A Hearts to Serve client beneficiary with his newly delivered food donation. (Archdiocese of Los Angeles)

Not only is Isaac Cuevas the director of immigration and public affairs in the Office of Life, Justice and Peace, but he’s also a chairman of public relations for the Knights of Columbus in California and a Knight himself. To him, the Hearts to Serve partnership is one that makes perfect sense.

“The Knights have been working with the Archdiocese of Los Angeles for many years,” he told Angelus. “So when the coronavirus happened and we got a call from the archdiocese asking for volunteers … it was a no-brainer for us to just wholeheartedly help out in any way we could.”

The order is aiming to help in two main areas: Knights over the age of 60 are being encouraged to man the hotline for calls coming in, while those under 60 and “mobile” are making deliveries to the homebound.

Cuevas said partnering with the archdiocese also enables better outreach to immigrants who are typically wary of receiving help from the government but feel safer seeking assistance from the Catholic Church.

“We don’t ask about anyone’s legal status,” he said. “That’s not our role. If people are calling and they need help and we can offer that help, we definitely will.”

Ultimately, the initiative is about “saving lives and helping people do well in moments of trial,” Domingo said.

“It’s about … putting your faith in action. I think that’s the most important thing. It’s the heart of what it means to be the family of God. And so Hearts to Serve is our response to that. It comes from the heart.”

Netflix’s ‘Cecil Hotel’ shows we have a silo problem

Saint of the day: Casimir of Poland

Vatican says papal trip to Iraq is ‘an act of love’