From top hats to turkeys, from crowns to cows, one could be forgiven for thinking the packs of teens sporting odd caps and headbands were attending a hat convention rather than a religious one.

Surely, it was a focus on Jesus Christ that brought nearly 3,000 young people to the Long Beach Convention Center Nov. 10-12 for this year’s National Catholic Youth Conference (NCYC). The event’s main agenda included Catholic speakers, workshops, eucharistic adoration and Mass. But there was a secondary agenda on the minds of this year’s participants: a high-stakes game of hat trading.

It begins with attendees showing off creative headwear referencing their respective home diocese or state. Montana teens strolled in with Big Sky Country cowboy hats, while a group from Washington donned the requisite rain hats. Local teens wore halos to represent the City of Angels, while packing two extras provided for trading purposes.

It didn’t take long for the trading to commence.

Ryan Macias spied a hat he just had to have. He started moving through the convention hall, wheeling and dealing, trading one hat for another until he was able to land his ultimate prize: a large bull head with horns and a snout.

“This is the big one,” said an excited Macias, from St. Cyril of Jerusalem Church in Encino. “The hat was a trade that took forever but I got it. I’m not going to get rid of it.”

Michael Behtash was all about strategy. He tried to get the most unique hats so he could continually barter for better. He even got NCYC performer Joe Melendrez to sign a hat in order to increase its value. In the end it was a beautiful butterfly hat that earned him the highly sought-after red velvet bishop’s miter with gold trim. It wasn’t exactly Wall Street-level trading action, but it was close.

“When you look at trading hats on paper, it doesn’t seem that exciting,” said Behtash, from St. Mel Church in Woodland Hills. “But when you’re trading a furry light-up halo for a pink Empire State Building visor, there’s just an element of wackiness that makes it pretty fun.” 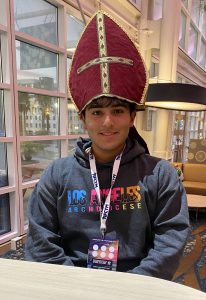 Wearing one hat wasn’t always enough: some teens wore two, three or whatever they could cram on their heads. Others would nab a good hat then tuck it away so no one would see it and want to trade. That’s what Nicolas Vara did after scoring a bucket hat with Christmas ducks and snowflakes. Vara liked not only the hat, but the teens he met along the way.

“You’re pretty much introducing yourself to people you would have never talked to if you weren’t here at this conference,” said Vara, also from St. Cyril. “It’s cool.”

Connecting with other Catholics is the whole idea behind the trading tradition. NCYC organizers say young people start to realize there’s a greater Church beyond their own parish doors.

“It’s an easy way to break the ice amongst young people,” said Christina Lamas, executive director of NCYC. “I can approach you and we can build community. … There’s something we share in common.”

If hats were not your thing, there was plenty of other swag to swap like buttons, bracelets, and wacky sunglasses. The Diocese of Orange came with flashlights while the Diocese of San Bernardino created keychains with QR codes that, when scanned, play worship songs on Spotify.

“We reached out to the young people to get the songs they like, so it’s something reflecting them,” said Edgardo Juarez, who oversees youth ministry for the Diocese of San Bernardino. “Then they can share what they listen to with teens from different parts of the country.”

New to NCYC this year was the Maryknoll “Share 4 Creation” T-shirt swap. Attendees could leave a shirt with a special meaning to them, along with a tag explaining why, and then choose someone else’s to take home. The racks were filled with shirts from Catholic schools and confirmation retreats. The Maryknoll Sisters brought a running tee with the note “may every step you make, make you closer to the heart of Jesus Christ.” NCYC volunteer Tangikina (Kina) Moimoi said she was moved by the message. 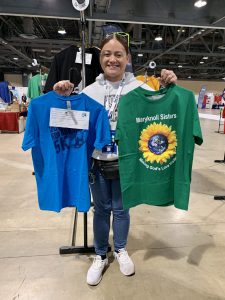 “Kina suffered a permanent brain injury that left her in a coma for about eight weeks. … It took her months before she could walk,” explained Gregory Darr, vocation minister for the Maryknoll Fathers and Brothers. “She is now able to run a 5K race even though her abilities are different. … She wanted to offer her own story as an example … [of how] to embrace hope and live in faith.”

Next to the T-shirt racks were pamphlets on the environmental and humanitarian impact of the clothing industry. Teens learned about the “true cost of fast fashion” and how to be more responsible consumers.

Nearby, attendees could make their own jewelry to keep or trade as well.

Once Behtash had his dream hat, he started helping fellow parishioners procure this year’s much desired bucket hats. When asked if he was this year’s unofficial NCYC trade master, he answered with a wry smile.

“You could call me that.”