In a fine white dress accentuated by a bright red confirmation stole — and matching red face mask — Estefania Torres approached the outdoor altar in the tented parking lot behind St. Lawrence of Brindisi Church in Watts.

Standing behind the 16-year-old at a social distance as she declared her confirmation name and was anointed on the forehead with sacred chrism by the church’s pastor, Father Matt Elshoff, was her sponsor, LAPD Sgt. Ken Busiere, in full black uniform.

It is the kind of scene that nonprofit organization Operation Progress has become known for helping create.

“I know that many young people today, and many young women, are drawn in so many difficult directions that can conflict with their faith and I think it’s important to have a strong Catholic mentor in their life,” said Busiere, a father of three girls and an 18-year LAPD veteran assigned to the LA Southeast Division.

A grassroots initiative started 20 years ago by LAPD officer John Coughlin as a way to better understand the needs of a community historically fraught by gang violence and poverty, Operation Progress currently boasts nearly 100 students at three elementary schools and three high schools. 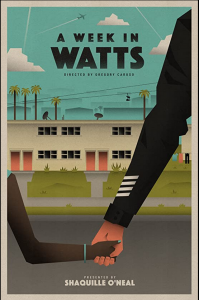 A poster from the 2017 documentary, “A Week In Watts,” focused on Operation Progress.

Starting as early as third grade, students grow according to “five pillars of success”: academics, life skills, health and wellness, service, and support and safety. There are also 3.0 grade-point benchmark levels of achievement measured by effort over ability. There are surveys to measure self-confidence, leadership, and the ability to share their stories.

But the program’s success is something its leaders say must be “measured one scholar at a time.”

Petra Avelar and Meah Watson grew up in Watts’ Nickerson Gardens housing development and joined Operation Progress in 2013. Avelar, a graduate of Mary Star of the Sea High School in San Pedro, is now at Stonehill College in Boston, while Watson is enrolled at Morgan State University in Baltimore.

Araceli Gonzalez, who started this fall at Texas Christian University, came into Operation Progress in 2014 while in the Gonzaque Villages housing development. Watson and Gonzalez both went to St. Mary’s Academy in Inglewood.

Avelar’s story was among those told in the 2017 documentary, “A Week In Watts,” directed and produced by Gregory Caruso (and son of major Operation Progress donor Rick Caruso) and which boasted NBA legend Shaquille O’Neal as executive producer. The film followed the impact of the program on six students living within a two-mile radius of St. Lawrence of Brindisi School, an area known for gang violence between Crips and Bloods.

Since the film’s release on Netflix, police departments from across the country have reached out to Operation Progress organizers. It has since been replicated in Ft. Worth, Texas, with the help of a private Christian school in an underserved neighborhood near there.

St. Lawrence of Brindisi School counts some 60 of its current 295 students as program participants, with a list of kids still waiting to be assigned a mentor officer. 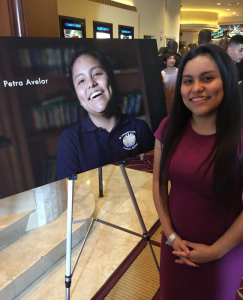 Petra Avelar poses next to a poster of herself in the lobby of a theater at The Grove in LA during the premiere of the documentary “A Week In Watts.” Avelar joined Operation Progress while at St. Lawrence of Brindisi School in 2013 and is now a freshman at Stonehill College in Boston. (Tom Hoffarth)

Some 25 officers at the LA Southeast Division continue as mentors, although Gartland would like that number to grow to more than 50. Recent officer promotions and reassignments happened just before Operation Progress was ramping up for the 2020-2021 school year, and it was during a recruitment push when COVID-19 hit.

Besides St. Lawrence of Brindisi School, there are a handful of students from nearby Catholic elementary schools San Miguel and St. Raphael, some of whom have been paired with officer mentors from LAPD’s 77th St. Division.

Gartland said she sees a clear correlation not only between officer mentorship and the students’ school performance, but in the attitudes of all involved.

“Families see officers in a different light,” said Gartland, who has led the organization since 2013.

But, she added, “the best outcome for me is seeing how the officers’ mindset in the community has changed. They seem more softer as they interact with families, which is something they usually don’t get a chance to do.”

When Sgt. Busiere was approached by her mother to be Estefania’s confirmation sponsor (her assigned LAPD Operation Progress mentor, Senior Lead Officer Roberto Yanez, isn’t Catholic), he considered it an honor. The program has given Busiere, who has mentored three students over the last eight years for Operation Progress, an intimate sense of what families like the Torres face.

“I’ve seen how young people have changed their opinions about police officers, but it works both ways,” said Busiere, who attends Saints Peter and Paul Church in Wilmington with his family.

“Frankly, a lot of misunderstandings in this country about race is because we don’t spend enough time with each other. And I think the Catholic worldview is one where you are better able to serve everyone’s needs and it encapsulates the core values in the police department.

“If we stray from that, we’re not the best versions of who we should be. I’m not sure how I’d do this job without my Catholic faith.” 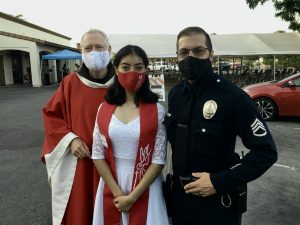 If Torres’ life was changed by Operation Progress, it is because an LAPD officer recommended the program to her mother at a crucial time: she was about to finish fifth grade when her family was evicted from their home amid a situation of domestic violence. Both her parents were arrested, and she was sent to foster care.

The turn of events brought her to St. Lawrence of Brindisi School on a scholarship when the pastor at the time, the late Father Jesus Vela, was helping LAPD officers recruit new students for the program.

“I was a shy, very quiet kid, and I didn’t realize how much of a traumatic phase I was going through,” said Torres. “I had a difficult time believing in police officers when they took away my parents. I was disappointed and angry and resented the police; it is their job to protect us. And now they want to help by sponsoring me?”

Torres said getting to know officers and the risks they take with their own lives left an impression on her.

“I can now see the relationship I have with the officers; it has started small but it continues to grow, and now it’s connected to my Catholic beliefs.” 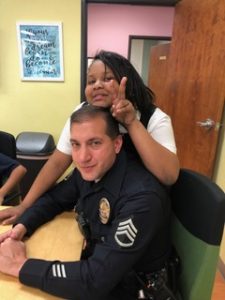 Father Elshoff has a favorite story he likes to tell when explaining the positive impact the LAPD has made on his flock.

Last June, when some 20 children in St. Lawrence of Brindisi School’s kindergarten class had a Zoom promotion ceremony, each was asked from their home what they wanted to be when they grow up, and why.

“I believe it was a third of them who said: I want to be a police officer, and the reason is because ‘I want to help people,’ ” recalled Father Elshoff, a lifelong educator who once served as president of his alma mater, St. Francis High School in La Cañada Flintridge.

“It wasn’t like they were all telegraphing this to each other. I believe this was because they so often see so many officers on campus mentoring their students.”

St. Lawrence of Brindisi School principal Alicia Camacho said the officers’ dedication can be seen in their regular participation in Catholic Schools Week Career Day every January. They bring their trained dogs on campus, give tours of the patrol cars, and even fly a helicopter overhead for a greeting.

During the COVID-19 pandemic, the mentor officers continue to check in on students’ grades and meet over Zoom welfare updates.

“Our new first-graders are huge fans of the officers,” Camacho said. “It’s because the officers have cultivated long-lasting relationships with our students and brought a sense of safety for all of us at school. I am grateful that our students get to know the police officers as individuals and caring citizens.”

The parish’s relationship with the LAPD has also helped Father Elshoff stay connected with the community during the pandemic. He and LAPD Sgt. Tim Jones have been holding community public meetings on Wednesdays in the parking lot of Café Oaxaca restaurant on Century Boulevard and Central Avenue in Watts, making themselves available to locals.

Father Elshoff, who moonlights as chaplain for LAPD’s Southeast Division, has taken to sharing experiences of the encounters on his Facebook page in a series dubbed “The Police and the Padre.”

The Capuchin says the meetings have helped him know people better, and the joy he’s witnessed in them despite the tough times “reinforces my mission as a priest and follower of Francis of Assisi.”

“It animates me to give more, and more often than not, in very ordinary, basic ways. It really doesn’t have to be complicated.” 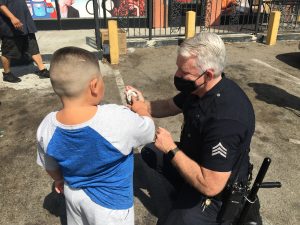 LAPD Sgt. Tim Jones gets on his knees to show his badge to a young boy in Watts during a meeting of “The Police and the Padre” outside of the Café Oaxaca restaurant on Century Boulevard near Central Avenue, across from Ted Watkins Park in Watts. (Father Matt Elshoff/Facebook)

One poignant moment Father Elshoff captured with his own cellphone camera was a time when Sgt. Jones was asked by a young boy if he could touch his badge. Jones crouched down and readily obliged.

“That’s our future,” Jones said of that moment. “I think of that moment, where we have to get down to the same level where they are comfortable and talk as equals. You can see people’s minds shift as I talk about my own life and my relationship with Father Matt.”

The son of a Southern Baptist minister, Jones said his relationship with Father Elshoff can be summed up by the priest’s recent birthday gift, a St. Timothy medal that he now wears every day on patrol.

“I think you can’t know what’s right in a community if you don’t know what’s wrong,” said Jones. “I know I have a better understanding since when I came in 25 years ago. Small drops of goodwill will spread the love and communication that we’re here to serve. That’s pretty cool.”