As churches prepare to reopen, LA Catholics reflect on lessons of the shutdown

Msgr. John Barry has been alive for almost 83 years, been a priest for 59, and served as pastor at American Martyrs Church in Manhattan Beach for the last 37 of them.

And after surviving a recent bout with the coronavirus (COVID-19), he has a confession to make.

“I took for granted celebrating Mass, and reconciliation, and visiting the sick,” Msgr. Barry said. Now, he’s quick to add, “I won’t do that again.”

Msgr. Barry came down with the coronavirus in March, but after a brief hospitalization and a virtual prayer campaign by parishioners, returned to celebrating Mass in time for Holy Week. If there’s one thing he’s learned, it’s not to take his health for granted.

“This disease is insidious and I didn’t think it would ever touch me until I got it, and I wouldn’t want anyone to get it,” said Msgr. Barry, who turns 83 in late June.

Now, with churches able to open as early as the first week of June after nearly three months of being closed, priests like Msgr. Barry and parish staff around the archdiocese have had time to take stock of a few of the pandemic’s blessings in disguise.

“At the beginning of all this, it was very depressing, and people were asking all the time when they could come back to church,” said Maria Elena Burgos, who heads the confirmation program and works in the office at Christ the King Church near Hollywood.

Burgos and her husband, Rene, who is in his third year of the permanent diaconate program, have been parishioners nearly 35 years.

“What we’ve been trying our best to do is give our parishioners hope,” Burgos told Angelus.

Among the parish’s Spanish-speaking faithful, families have had to deal with lost jobs and many children at home. For its Filipino community, the time of pandemic has provoked a slew of prayer requests for sons and daughters working as doctors and nurses on the front lines of the coronavirus.

“Even if it’s just someone calling us and telling us they’re running short on toilet paper, we have someone to minister to that,” said Burgos. “Whatever we can do to let everyone know we are there for you, and keep our sense of community.” 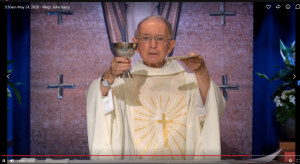 When the stay-at-home orders began in March, Father Matthew Elshoff, OFM Cap., could count on parishioners at St. Lawrence of Brindisi in Watts to follow livestreamed Mass on Facebook. But he realized the most efficacious way to help his parishioners experience the grace of the sacraments was to bring it to them as best he could.

So, joined by his fellow Capuchin priests in their brown robes, he started going outside with a large crucifix leading a procession of the holy Eucharist.

“Walking the Blessed Sacrament through the streets was often an emotional experience, both for me personally as well as those who encountered it,” said Father Elshoff. “The concept of walking might seem unique, but it brings you close to the people. The Mexican/Hispanic people identify with the person who walks. It puts that person in touch with their reality.”

The pastor at St. Lawrence of Brindisi since 2018, Father Elshoff said their mission allowed the priests to “come to know our people in a totally different way.”

“We could see mothers and fathers bring their children to us, kneeling in their driveway, devoutly in prayer, as if they were making their first holy Communion. It was not lost on me how they were often separated by a chain-link fence.

“But also people cried as they knelt in the streets and gutters, sobbing out their prayers of gratitude. You could not help but see how they were suffering for the Bread of Life.”

Father Elshoff said such experiences have deepened his faith and strengthened his belief in the goodness of his community.

“Even those who were not Catholic, often African Americans, would call out to us, ‘Praise be Jesus!’ or ‘Bless you for coming by,’ ” Father Elshoff recalled.

The takeaway for Father Elshoff? That “the faith of Jesus Christ is alive and well in Watts — there are no atheists in foxholes.” 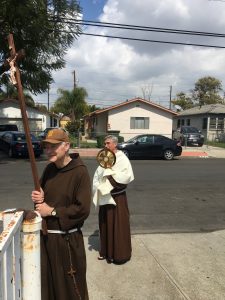 When St. John Vianney Church in Hacienda Heights burned down eight years ago at the hands of an arsonist, Masses moved to the parish hall next door.

But during this spring’s pandemic “shutdown,” associate pastor Father Egren Gomez saw how “the power of evangelization was made very clear,” in moving Masses to the parish hall’s virtual equivalent.

Ordained a priest two years ago, Father Gomez helped not only launch a regular prayer service for the pandemic called “Otium Sanctum” (“Rest for your Soul”), but ended up as its camera director. There are now more than 2,000 subscribers on the parish’s YouTube channel, complementing its expanding Instagram reach.

Father Gomez said he doesn’t see such technology replacing in-person Mass, but as a member of “Gen X,” he can see its benefits in times like these, even though some wonder if Catholics will get too comfortable with staying home for Mass.

“Maybe it took this pandemic to give it the push we needed to get more comfortable with it and lead to a new way of becoming a mission Church,” said Father Gomez, who even got feedback on the parish’s digital outreach from a friend in Africa.

In South Pasadena, the pandemic has given Holy Family Church’s 30-year-old on-campus media studio a new sense of purpose, having helped the parish livestream four Masses each weekend to an estimated 10,000 viewers in recent weeks.

The church’s website has also been revamped to “make it pandemic-friendly with new spiritual resources and daily emails of comfort as we pray together as we are apart,” said parish life director Cambria Tortorelli.

“We have so much more ability now to gather remotely with meetings and webinars and formation. I think it’s been a game changer at our church. We miss the dynamics of getting together and we need social interaction, but this can increase the flow of communication.”

Father Brian Humphrey, associate pastor at St. Mary Magdalen Church in Camarillo since his ordination to the priesthood last year, came into religious life after a career in the Hollywood music industry.

While he thinks the pandemic has emphasized the need for parishes to have an online presence, perhaps by relying on the help of a digital art director or team, livestreamed Masses should ultimately be something reserved for the sick or homebound.

“I am glad we as a Church are getting better at using the new media to create spaces for spiritual communion, but I think we have to be careful not to promote a disembodied faith,” said Father Humphrey. “As Catholics, we believe in the Incarnation. This includes all five senses, not just two.” 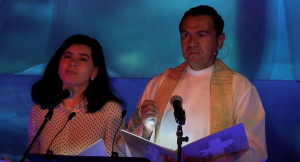 Bandwidth in the human form led Manuel Pacheco, the maintenance foreman at St. Paul the Apostle Church in Westwood, to ask pastor Father Gil Martinez, CSP, what it would take for a long overdue refresh of the church exterior as well as the rectory.

“I’ve only been here two years,” said Father Martinez, “and this is something they’ve talked about here the last 15 years.”

An outsourced bid was submitted for more than $70,000 for the church and $30,000 for the rectory. But Pacheco decided he and his crew could figure it out themselves, starting with renting a 150-foot forklift.

“Our No. 1 priority was to keep everyone working,” said Father Martinez. “We did not want him sitting at home unemployed. This has been a godsend to us. Manuel and his team have been our essential workers, to borrow a term.”

Father Martinez himself used the time to work on upgrading light fixtures and keeping up with gardening. The effort has saved the parish tens of thousands of dollars.

“It’s a snapshot of how much people really care about the church and the community. It’s been a real sign of hope and it will bring a new wave of energy and excitement when we all come back,” said Father Martinez.

At the same time, he said the community has been coping with the coronavirus deaths of both a husband and wife who passed away a week from each other, after coming home from a trip to Europe.

Their graveside funeral with limited mourners was “stark, and it felt like a mystical experience,” said Father Martinez. “There are many profound things happening this way nowadays.” 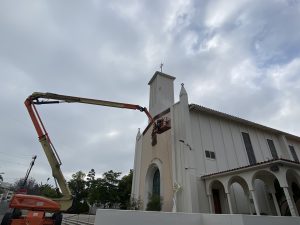 Manuel Pacheco's team of workers used a forklift to paint the exterior of St. Paul the Apostle Church in Westwood while it was closed. (Father Gil Martinez)

So how have the experiences of the last three months prepared the Church in Los Angeles for what’s next?

For Msgr. Barry, one of the potential positives of the pandemic is “the discovery of the disconnect people felt with no access to a sacramental life and to the Eucharist. That will open up a further realization of what we have in our faith.”

Father Humphrey agreed on both counts, saying his parishioners’ “intense hunger for the Eucharist” has been a source of hope for him as a priest.

“Some have shared with me the hurt, and even sense of betrayal, they have felt by the Church’s response to the pandemic,” Father Humphrey said. “But they say their desire for the Eucharist will help maintain unity.”

Ultimately, Father Humphrey believes, now is a time to “rally behind our shepherd, Archbishop Gomez,” especially with difficult times ahead.

“I have no doubt he and his team are going to move with the Holy Spirit to bring even more good out of this difficult situation,” Father Humphrey said.

Holy Family’s Tortorelli believes the experience has also been a reminder that “parts of the body suffer in many ways that affect us all,” especially with respect to those suffering in solitude from mental health issues, isolation, or abuse.

“In some respects this COVID is a great equalizer. We are all at risk, from the highest level down to the most humble. We just have to keep recognizing that we’re not really in charge of what happens next.”