Sister Deirdre “Dede” Mary Byrne plays down the three-part description she’s often tagged with: soldier, surgeon, and sister. It’s true that she retired as a colonel in the U.S. Army after 29 years of service in 2009. But the 63-year-old woman religious points out that for many of those years of service, she was comfortably at home in Washington, D.C., as part of the Army Reserve.

The sister of the Little Workers of the Sacred Hearts of Jesus and Mary was honored by the Mission Doctors Association Oct. 13 at the annual Mass for Healthcare Professionals — better known as the “White Mass” — at the Cathedral of Our Lady of the Angels. 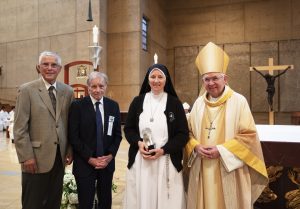 Byrne joined the Army, in fact, to go to medical school. She wanted to take some financial burden off her parents, who were already supporting half of their eight children in college, with one finishing up at Georgetown Medical School.

The Army, she found out, just happened to have a great scholarship program for anybody accepted to medical school. Becoming a physician was one of her career goals, besides a lifelong calling to be a woman religious. And, like her brother and father, she was accepted to Georgetown Medical School by what she calls a “miraculous event.”

“I had no clue what I was doing, you know, because I had never been exposed to the military growing up,” Byrne told Angelus News. “So in the beginning, it was not very altruistic of me. I joined because it paid for my education. But I fell in love with the Army after I joined. You really fall in love with the soldiers. You become patriotic.”

When it comes to being a sister, that’s a much longer, complicated journey.

“My mom said I had a ‘vocation in utero,’” Byrne recalled with a chuckle. “My parents had these Maryknoll mission magazines, and I used to just sit there and just look through them. And then later I’d heard about Mother Teresa of Calcutta, now St. Teresa, and it really inspired me in my younger years to do that. I felt that that was the direction God was calling.

“But I did also date and things like that, just to make sure,” she added.

She was sure. But her vocation kept being put off after joining the Army and becoming a doctor and then a surgeon. She was clear that she wanted to serve the poor with the best medical training she could get first.

Still, that inner desire to enter religious life also never went away. She just wanted to make sure she chose the right community, being a “very traditionally minded, old-fashion girl.”

She started working with the Missionaries of Charity, even going to India to meet the future St. Teresa of Calcutta. In June 1997, she spent a week with her in Washington, D.C., when Mother Teresa received a congressional gold medal.

During an hour of adoration before the Blessed Sacrament one day, she asked, “Well, Lord, do you want me to forget about this religious thing or give up being a doctor?”

She eventually decided on the latter, because she knew being a surgeon didn’t really fit with the religious community. 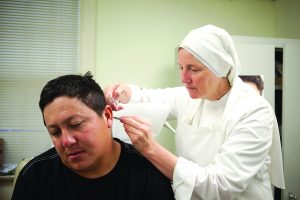 Sister Dede Byrne helps a patient at a Catholic Charities medical clinic in Washington, D.C. in 2012. (Paul Fetters/Archdiocese of Washington)

One day, she sat down with an elderly Jesuit friend, Father John Hardon, who told her point blank: “You will not join the Missionaries of Charity! God gave you this gift to do medicine. You have to use it.”

By then she was in the Army Reserves, but Byrne kept looking for a better fit. In the year 2000, she crossed paths with the Little Workers of the Sacred Hearts of Jesus and Mary in Washington, D.C.

The religious community, whose members wear habits and — when necessary — hospital garb, ran a physical therapy and eye clinic in the capital. She also learned about intense prayer life and how the community was founded in Italy in 1894, with missions spreading to the United States, Albania, Argentina, and India.

And, most importantly, she found out that while about 80% of its members were educators running schools, 20% provided health care to the most needy.

Byrne had found her fit.

She decided to give up what she calls the “perpetual discerning community” and entered the Little Workers’ formation in 2002. She took first vows in 2004, a step she refers to as “throwing on a habit.” In 2009, when her mother general asked, “Do you think you can retire from the Army?” she finally did.

Byrne had served both in the Army and as a member of the Little Workers of the Sacred Hearts for some seven years. And during that time, she was deployed to Walter Reed Hospital in Washington, D.C., Colorado, and Afghanistan. In between, there were several mission trips to numerous third-world countries.

Wasn’t there conflict between the two?

“No, none whatsoever,” she replied. “If you spend any time in the military, you become very patriotic. And as a physician, you’re on the healing end of any conflict. So a lot of times, even before I was a sister, we spent our time helping the local people.

“And I always volunteered for overseas assignments. I was in Korea, the Sinai peninsula, places like that where we got really involved with the local people and could really help them out.”

And there’s another thing, according to Byrne. Many people in the military are very devout Catholics. She describes the priest chaplains she met as “awesome,” going above and beyond their official duties and putting themselves in harm’s way. And she points out that the military is a “fantastic mission field,” where many vocations are born.

She said the joke was “I was the nun with the gun.” But, in fact, she only carried a side arm in Afghanistan, and that was to protect patients.

In short, there was no problem being both a soldier and a sister.

Today, Byrne flies to Haiti twice a year to provide medical aid as a member of “Archangel Airborne.” She also goes to Iraq as a civilian to help an archbishop build a hospital in the Kurdish area. And at the Catholic Charities’ medical clinic in Washington D.C., she continues doing general surgeries mostly on refugee outpatients at a local hospital.

About being honored by the Mission Doctors Association, she said, “Well, you know, it’s like anything. It’s really all God’s glory. I always shun the award thing. Except that I always just say, ‘Lord, if this maybe brings more information about the Little Workers of the Sacred Hearts,’ or ‘If it brings more light to the work that he does through all of us, regardless of how much we may fail him, that’s good.’ But we just do the best we can.

“I tell the young people: If you just totally open yourself up to God’s will, you’ve just got to put your seat belt on and you’re going to be up for a wild ride.”

More pictures of the 2019 White Mass can be viewed here.