A half-dressed man was arrested Wednesday evening after climbing the roof of St. Mary Church in Boyle Heights and setting fire to the small cross atop the building.

Local police arrived at the church around 8:30 p.m., responding to calls about a man, wearing only underwear and a sock, climbing to the church roof and attempting to set the building on fire.

In a statement, the Archdiocese of Los Angeles thanked the LA fire and police departments for their quick response, and offered prayers for the St. Mary parish community, “as well as for the individual who was responsible so that he may receive the help needed.” 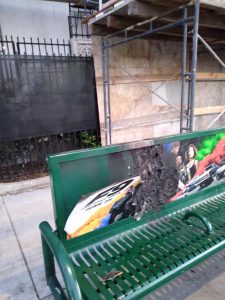 A bench near the church was damaged Wednesday evening. (Courtesy St. Mary Church)

The 25-year-old man, who has not been publicly identified, attempted to escape for nearly two hours, jumping across neighboring rooftops and dangling from electrical wires.

The church, which is over 100 years old, was closed at the time, with no one inside. According to the archdiocese, the building suffered fire damage to the roof of the bell tower, along with broken stained-glass windows. The parish is currently accessing the full extent of the damage.