St. Margaret Mary Church in Lomita inaugurated a new parish activity center on March 12 as part of its continued outreach to those in need.

The new Msgr. Pat Thompson Christian Service Center “will be a center of our parish activities and a place where all people are welcome,” said pastor Father Paul O’Donnell at the dedication and blessing of the building, which drew parishioners and Christian Service volunteers.

“May we come to know one another as we serve our sisters and brothers in love,” he said in his introductory remarks. “Let this place give witness to our faith in Christ our redeeming Lord.” 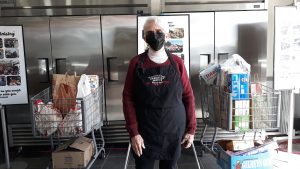 In an interview after the dedication of the new center, Father O’Donnell said that St. Margaret Mary parishioners “are very much aware that in serving the poor, we’re touching Christ.”

Laura Nieto, current director of St. Margaret Mary’s Christian Service program, emphasized that the program functions thanks to the parishioners who fund it and the 100 volunteers who volunteer their time. She described the program as “the heart of the parish.”

The program began early in the 1970s when then-pastor Father Harold Cremins would call parishioners, asking them to bring certain supplies to the rectory for needy families. In 1985, an organized program began, and Sister of Charity of Rolling Hills, Sister Liz, became its first director.

In the 1990s, then-pastor (and future auxiliary bishop of Los Angeles) Father Joseph Sartoris encouraged the program to organize itself more. Parishioners began making the rounds of grocery stores on weekdays collecting donations. At first, food was distributed from the parish office, then in the parking lot. Eventually, all those being served by the parish would come to the parish hall on Wednesdays to take home bags of food.

When COVID-19 began changing everyone’s routines two years ago, the program began welcoming people in need from Monday through Friday, assigning each family an appointment. Today, it is one of the largest food programs in the region.

Until last Saturday, the program still lacked a facility of its own where it could adequately process donations and welcome those destined to receive them. Since the beginning of the program, the Christian Service Center was always “borrowing” space from other areas on the parish grounds. Through the generosity of several individual donors, and a record-breaking second collection taken up for this specific purpose, the parish raised $81,000 in just a month. 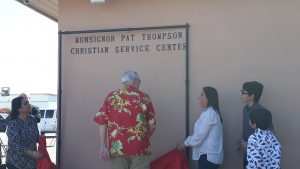 The new center is named after Msgr. Patrick Thompson. who was the parish’s pastor from 1994 to 2010. Parishioner Mike Molina described Msgr. Thompson as a “normal but remarkable” man, who could converse in 10 languages. But the language he knew best, parishioners say, was the language of love.

“I remember one specific conversation that I had with Father Pat,” recalled Nieto. “He told me he had a dream of building a Christian Service Center. Both of us dreamed big and said, ‘That would be so good!’ To name the new center in his honor just chokes me up because not only did he serve people, but he empowered. That’s what Christian Service does.”

Longtime parishioner Mike Molina said that “the parish community really believes in the words of Matthew, chapter 25, where we are to serve people, those who are in need. … Not only does this parish do it, we’ve embraced it.”

Also in attendance at the dedication was Lomita City Councilman Mark Waronek, who called the new center “a jewel right here in our own city.”

“We know we feed the folks in our community, the homeless, those that need it,” said Waronek. “Having this expansion to feed more families here in our community means so much more.”