In early October, Pope Francis officially launched a two-year process of listening and discernment that calls for the participation of every one of the world’s 3,000-plus Catholic dioceses under the title, “For a Synodal Church: Communion, Participation and Mission.”

In the Archdiocese of Los Angeles, where a leadership team has begun activating the levers and fulcrums to initiate the process, the task of carrying out the synod’s local phase involves entering some uncharted territory, due to lingering uncertainties caused by the COVID-19 pandemic and the wide scope of local participation this year’s synod calls for.

But so far, the archdiocese’s recently named synod process coordinator is taking the task in stride.

“Is it a challenge? Yes, but the beauty is this is the beginning of an ongoing journey,” said Karen Luna, who works as the Young Adult Ministry coordinator for the archdiocese.

“When I’m looking at the process, what gives me hope is trusting what the Holy Spirit has sent already. I’m looking forward to seeing ideas merge into an opportunity to listen in the midst of all this grief we’ve experienced recently.”

Luna and her steering committee were introduced at the conclusion of an Oct. 31 Sunday morning Mass at the Cathedral of Our Lady of the Angels celebrated by Archbishop José H. Gomez, who attended the Oct. 10 Mass in Rome celebrated by Pope Francis to officially open what observers have dubbed the “Synod on Synodality.”

In his homily, Archbishop Gomez said the start of the synod was a moment to “ask for the grace to think more deeply about our lives as disciples and followers of Our Lord Jesus Christ.” 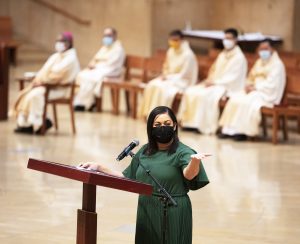 Synod process coordinator Karen Luna speaks at the Oct. 31 Mass initiating the local phase of the 16th Synod of Bishops in the Archdiocese of Los Angeles. (Victor Alemán)

The first step in LA’s execution of the plan is a new multilanguage website with resources explaining the process, as well as a collection platform for input from around the archdiocese. Documents on the site also explain the directives issued by the U.S. Conference of Catholic Bishops (of which Archbishop Gomez currently leads as president) as well as from the Vatican.

The archdiocese plans to use the first weeks of 2022 before Lent — from January to March — to engage in the “listening” phase of the synodal process, with listening sessions in parishes and in regional groups. The LA plan calls for existing pastoral councils at the archdiocesan, regional, and parish levels to implement the process by sharing, reflecting, and listening.

Ten general themes are to be the examined: Companions on the Journey, Listening, Speaking Out, Celebration, Sharing Responsibility for Our Common Mission, Dialogue in Church and Society, Ecumenism, Authority and Preparation, Discerning and Deciding, and Forming Ourselves in Synodality.

Thanks to an extension recently granted by the Vatican, bishops’ conferences now have until October 2022 (instead of April) to submit their summaries of local consultations like LA’s to the Vatican.

Vice Chancellor Father Parker Sandoval, who also serves on the synod steering committee, calls the undertaking “a daunting process.” He speaks from experience: 20 years ago, he was a delegate to an archdiocesan synod convoked by then-archbishop Cardinal Roger Mahony.

He recalled being amazed that out of “the distillation of thousands of voices from our parishes,” the principal concern was addressing the modern crisis of faith.

“The New Evangelization rose to the top,” he remembered.

Today, “my hunch is that this still is on the hearts and minds of many Catholics, our parents, and grandparents, who want to know what kind of Church their children are inheriting.” said Father Sandoval.

The greatest strength of the local church in LA, he believes, comes from its diversity, which “is unlike anywhere else really in the world, so we hope to draw in as many voices as possible.”

But as Pope Francis has highlighted a need today to pay more attention to young people who may feel disengaged from the Church, the appointment of Luna to coordinate the LA process sends a clear signal. 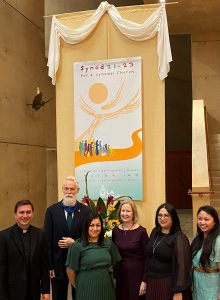 A native of South LA, Luna is a first-generation graduate of Loyola Marymount University and holds bachelor’s and master’s degrees in theology from the Jesuit school.

“During this pandemic, one of the main things I’ve learned in Young Adult Ministry that I can bring to the synod is what we have found about a need for relationships that are creative and different in their approach, using all sorts of technology and mediums,” said Luna, a wife and mother of two young boys who as a family attend Sacred Heart Church in Covina.

Luna and Father Sandoval both see the synod as an opportunity to show how church leadership can initiate discussions that respect opinions and, hopefully, come to common understandings.

“One of the great ills of our society is not knowing how to engage in thoughtful conversation without running through ideological extremes or attacking someone,” said Father Sandoval. “If we learn to dialogue well with the right attitude — surrender to the spirit — we can have an honest conversation that is not argument or debate.”

In addition, Father Sandoval is overseeing the celebration of the archdiocesan “Forward in Mission” San Gabriel jubilee year. He describes the coinciding of the synod process with the local church’s 250-year birthday celebration as “providential.”

“Both are focused on mission,” he said. “This has everything to do with renewing our mission to reclaim the gospel in a fresh way to our people, to our society and to offer our world hope, hope the risen Jesus offers.”