LA Catholics hope to ‘ignite a fire’ after Eucharistic Congress

You could almost feel the souls being lifted.

Endless rows of Catholics sitting side by side, eyes closed, hands on hearts, envisioning a face-to face-encounter with Jesus and praying to him with one voice. This witness of shared faith took place during the Los Angeles Archdiocesan Eucharistic Congress at the Cathedral of Our Lady of the Angels on Aug. 13, where nearly 3,500 people filled the pews. The event — the first ever such event in Los Angeles — was a local kickoff of sorts for the U.S. Conference of Catholic Bishops’ (USCCB) multiyear “National Eucharistic Revival” initiative.

The daylong event included eucharistic adoration, music, and lectures by Catholic speakers in both English and Spanish, culminating in a Saturday vigil Mass celebrated by Los Angeles Archbishop José H. Gomez. In his homily, Archbishop Gomez called participants to “become eucharistic missionaries” for a world in need of Christ’s presence.

“We mean so much to him that he offers his body and blood for us,” said Archbishop Gomez. “We are worth so much that he would endure the pain of the cross and the shame of the cross so that we can live forever in the fire of his love. … The best way to thank him is to venerate him and give our life to him.”

Spreading that flame of faith is exactly why Denise Solan came to the congress. 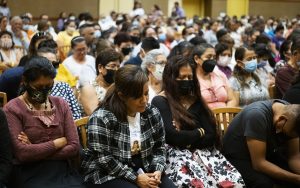 “I wanted to be renewed in the love that Jesus has to offer us,” said Solan, parishioner of Our Lady of Guadalupe Church, Hermosa Beach. “I want to take that back to my parish to help ignite that fire that's happening as a part of this revival.”

Laura Day of St. Louis of France Church in La Puente said there was no way she could miss such a gathering.

“I jumped at it,” said Day. “I changed my work schedule so I could be here. I think things like this help me grow in my spirituality.”

It’s the kind of excitement the U.S. bishops hope will translate into a true “revival” on the national level following signs that devotion to the sacrament may be waning.

A study by the Pew Forum on Religion and Public Life made headlines in 2019, concluding that only one in three Catholics actually believe in the real presence of Christ in the Eucharist. Then, in 2020, the COVID-19 pandemic prevented Catholics from participating in the Eucharist for several months. Church leaders recognize that some parishioners have not returned.

In response, the bishops approved the idea of a National Eucharistic Revival, a three-year drive to help Catholics rediscover the truth of the Real Presence. The current year focuses on diocesan driven events like the LA gathering, while the second year emphasizes initiatives at the parish level. In July 2024, a National Eucharistic Congress will be held in Indianapolis.

“We’re going to actually walk the Blessed Sacrament across the country. … This will be a public display of what we believe,” said Bishop Andrew Cozzens of Crookston, Minnesota, who is spearheading the revival for the U.S. bishops. “It’s never been done.”

Bishop Cozzens, who is also chairman of the USCCB’s Committee on Evangelization and Catechesis, was one of the speakers at the congress. He told Angelus the bishops are “seizing this moment” to help the Church stay relevant in the 21st century. Without an impulse to spread the faith, he worries, “the Church is going to die.”

Henry Choi’s family sat in the back of the cathedral during Bishop Cozzens’ presentation, one child in a stroller, the other strapped to Choi’s chest. He told Angelus he wants the Church to thrive for them, and the bishop’s talk made him reflect on how each of us has to do our part.

“I go on Sunday, I give my time, put a little something in the collection plate but what kind of sacrifice is that?” questions Choi, of St. Raphael Korean Catholic Center in Norwalk. “He [Bishop Cozzens] made me think … is there more I can do?”

Yes, said Bishop Cozzens and he has something in mind.

“Testify!” he said with a laugh. “I want you to witness that Jesus is alive and he’s a real person and you have encountered him. I want you to invite other people to encounter him in the Eucharist.”

Other conference speakers included Father Agustino Torres of the Franciscan Friars of the Renewal and founder of Corazon Puro, Sister Hilda Mateo of the Missionary Guadalupanas of the Holy Spirit and the U.S. director of Ongoing Formation, Sister Miriam James Heidland of the Society of Our Lady of the Most Holy Trinity, who is an author and lecturer, Noel Diaz, founder of L.A.-based El Sembrador Catholic television network, and Chris Stefanick, a popular Catholic author and speaker. 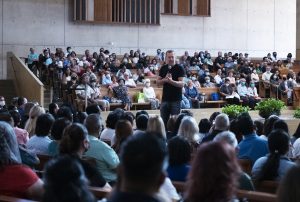 Chris Stefanick speaks at the Archdiocesan Eucharistic Congress at the Cathedral of Our Lady of the Angels Aug. 13. (Victor Alemán)

Wearing a T-shirt, the father of six pumped up the crowd as soon as he strutted out shouting, “Isn’t it great to be a Catholic?” Stefanick’s talk focused on the joy of Christian faith — with a few jokes about marriage and family life mixed in. Afterward, he told Angelus he could feel the enthusiasm rising from the pews.

Stefanick lives in Denver but said the event was a homecoming of sorts: he was once a youth minister in Montebello, and his wife hails from Venice. He said he sees the revival as being about “creating a moment.”

“My hope is that people use this as an opportunity to be proud of their faith again and invite others back with them to the beauty of the Eucharist,” he said.

Like many others in the audience, Joyce Ann Armijo of Our Lady of Guadalupe Church in Hermosa Beach came away from the presentation visibly moved. “He touched my heart,” she said. “His words reinforced everything I believe.”

Dozens of LA seminarians were scattered around the cathedral to direct attendees or assist with the liturgy. Among them was Deacon Emmanuel Sanchez. With only one year left of seminary, he looks forward to becoming a priest and leading by example when it comes to embracing the Real Presence.

“You can preach as much as you want in your homilies but unless you really start living it, really having an intense prayer life with the Lord, it’s not genuine,” said Deacon Sanchez. “I just hope when I’m celebrating Mass 50 years in the future … that fire never leaves me.”

Father Juan Ochoa, director of the archdiocese’s Office of Worship, was the event’s lead organizer. After four months of planning and countless employee hours from multiple departments, the end result he said, exceeded his expectations. He has only one more wish.

“My hope is that people did not leave the same as they came,” said Father Ochoa, who is also pastor of Christ The King Church near Hancock Park. “Encountering Christ is not just attending an event. … I wanted people to encounter a living God and leave transformed by God.”

At the end of Mass, Father Ochoa announced there are more congresses to come, one in each of the five pastoral regions of the archdiocese. He also revealed there will be special events for children and young people; exciting news for teens in attendance, even if their friends don’t always get it.

“Sometimes they (friends) say, ‘Oh church, that’s good,’ and sometimes they say, ‘Don’t you get bored?’ ’’explained Fatima Orozco, age 14, of St. Clement Church in Santa Monica. “I’m like no, because I am there in the presence of Jesus!”

For more information about about National Eucharistic Revival, visit eucharisticrevival.org.

Archbishop Gomez, Cathedral of Our Lady of the Angels, Eucharistic Congress, LA Catholics