In honor of National Vocations Awareness Week, Nov. 1-7, the Archdiocese of Los Angeles, the Office of Vocations and Religious Education, and the Department of Catholic Schools have teamed up to bring a virtual vocation day to local Catholic school students.

Students in grades 5-8 have also been invited to participate in this year’s vocation poster contest, submitting artwork that reflects God’s call for every person in life. In previous years, students have submitted works showing two sides of a person, completed by answering God’s call, or comic-book style art depicting the heroic nature of vocations.

Because most Catholic schools in the Archdiocese are doing distance learning, this year’s kickoff event will be virtual. The Department of Catholic Schools and the Office of Religious Education (ORE) are offering a series of live and pre-recorded talks and presentations on Nov. 3 at 10 a.m. Students will hear from religious women and priests about discerning God’s call and being open to a vocation to the religious life. 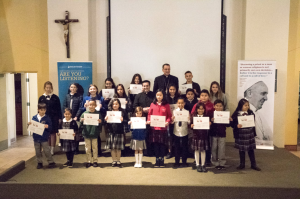 Sister Gabrielle Vogl, one of the guest speakers, has been a member of the religious Society Devoted to the Sacred Heart for 15 years. She studied for 13 years at Catholic schools in the Archdiocese of San Francisco, and is currently the retreat director of the Heart of Jesus Retreat Center in Santa Ana.

Guest speaker Father Matthew Wheeler was ordained for the Archdiocese of Los Angeles in 2018. Fr. Wheeler grew up in Minnesota before coming to LA to attend the University of Southern California (USC). It was there that he felt called to be a priest.

“My vocation to the priesthood grew little by little through personal prayer, love for the Eucharist, and service to others,” he said. Fr. Wheeler is the associate pastor at St. Anthony Church in San Gabriel, and the regional vocation director for the San Gabriel pastoral region. 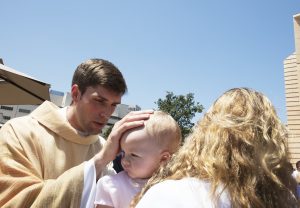 The live event also includes worship music from local youth leaders, a Q&A session with presenters, and a closing prayer.

National Vocation Awareness Week has been celebrated in the U.S. since 1976, when the country’s bishops designated the 28th Sunday of the year for vocation awareness. In 2014, the week was moved to November, to more fully engage students in Catholic schools and colleges.