Pope Francis’ decision to abolish the obligation of secrecy for Church proceedings related to the sexual abuse of minors by priests was welcomed as a “a tangible, meaningful act” by the Victims Assistance Ministry Coordinator for the Archdiocese of Los Angeles.

“I see it as a tangible, meaningful act that acknowledges accountability and is respectful of both clergy abuse victim-survivors and civil authorities,” she said.

The pope’s decision lifts the “pontifical secret” for those who report having been sexually abused by a priest and for those who testify in a church trial or process having to do with clerical sexual abuse.

Banis said she sees the decision as a validation of the efforts taken towards transparency in the the Archdiocese of Los Angeles, the country’s largest archdiocese, for many years now.

“In Los Angeles, we have witnessed the healing that emerges when the church listens and responds to victim-survivors by being as transparent as possible, by making reports to the appropriate civil authorities, and by making public announcements that enable other victim-survivors to come forward and be supported,” said the clinical psychologist.

Before joining the Archdiocese full-time in 2016, Banis worked as a clinical psychologist in Los Angeles area schools for more than a decade and served on the faculty of Occidental College. 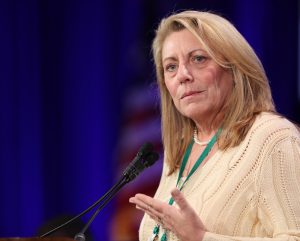 Heather Banis, a clinical psychologist who is victim assistance coordinator for the Archdiocese of Los Angeles, speaks Nov. 13 at the fall general assembly of the U.S. Conference of Catholic Bishops in Baltimore. (CNS photo/Bob Roller)

She made international headlines when she addressed the United States Conference of Catholic Bishops (USCCB) during their fall assembly in November 2018, where she urged the prelates to “demonstrate trustworthiness again and again” by dealing swiftly with abusive clerics and listening to abuse victims.

She believes that Pope Francis’ decision will have a real-life impact on the victims she listens to and supports as part of her job.

“Not only does such a shift as this have important implications for the victim-survivors’ healing but it also invigorates the renewal of the church in her efforts to restore trust with all her people,” she said.