Each wearing his prized black Kobe Bryant Lakers jersey with the No. 24 emblazoned on both sides, Father Andrew Chung of St. Pancratius Church in Panorama City and Father Fidelis Omeaku of St. Mary Magdalen Church in Camarillo stood in front of a tribute shrine set up on the stage behind the south basket at the Chaminade College Prep gym in Chatsworth last Friday night.

First they faced a friend snapping their photo, but they then turned around to show the “BRYANT” name across their backs, matching both a gold and white Lakers jersey that hung among photos and memorabilia honoring the NBA star killed with his daughter Gianna and seven others in a helicopter crash a few weeks earlier.

After Father Chung scored a game-high 14 points in the Team Priest’s 58-45 victory over Team Seminarian in the Feb. 7 charity event sponsored by the Archdiocese of Los Angeles’ Office of Vocations, he reflected back on that moment during warmups.

“It was powerful. Kobe was who I grew up with watching basketball, and to have such a tragic event involving him and eight others who passed away really took over LA and ripped the hearts out of people,” said Father Chung, who went home with the game MVP trophy. “He’s someone who united LA in one sense, and tonight we were gathered all in the name of God.” 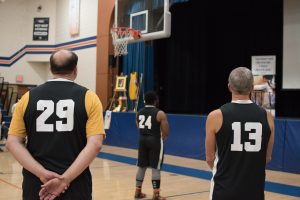 Fathers Darrin Merlino (29), Tom Baker (13), and Fidelis Omeaku (24) during the 24 seconds of silence held in memory of the victims of the helicopter accident that killed Kobe and Gianna Bryant. (JohnMichael Filippone)

Father Omeaku, who claimed No. 24 on his priests’ team jersey during the game and scored a key fourth-quarter basket to help preserve the win, said Bryant was the reason why he started playing basketball as a youth of the international ‘Kobe Generation’ of basketball fans in Nigeria.

“What stood out about him was, even when he encountered difficult times, his perseverance was important,” said Father Omeaku. “That became a spiritual perseverance for him to live out, not just in sports but everyday life. That’s something that has actually helped me with challenges I’ve encountered. That’s what I appreciate so much about him.

“I have a poster in my room with him, Jerry West, and Kareem Abdul-Jabbar, and it has the losing team record each of them had in their first season. And on the bottom it says, ‘They who endure, conquer.’ I look at that all the time.”

Both teams lined up along the 3-point line and joined the hundreds in the gym for a 24-second moment of silence for all the victims of the crash that took place just 15 miles away in Calabasas Jan. 26. Team Seminarian guard Jihoo “Kevin” Kim, wearing No. 24, then embraced Father Omeaku at the free-throw line.

“His demise is still one of the most difficult things we’ve had to deal with,” said Father Omeaku. “To date, I still don’t believe it and may not until I see a funeral. Let them all rest in peace.”

Father Sam Ward, director of vocations and the play-by-play broadcaster for the game, said the Bryant news hit home for him as a Southern California native.

“He was a faithful Catholic man and our heart breaks for those families,” said Father Ward, who grew up in nearby Agoura Hills. “If we can give some joy to his family, maybe if they hear about how we honored him as the whole world has, then it’s all worth it, too.” 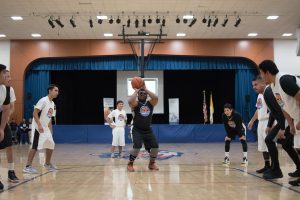 A night otherwise dedicated to celebrating the comradery of current priests with those studying to become priests came with a sacramental twist: Having been ordained to the priesthood just eight months ago, two players who were part of last year’s Team Seminarian 15-point win found themselves playing for the opposite side this year.

Father Brian Humphrey, at St. Mary Magdalen Church in Camarillo, and Father Louis Sung, at St. Peter Claver Church in Simi Valley, were co-coaches of the seminarian team in 2019. With Team Priest leading by four points with 3:30 to play, Father Humphrey converted a 3-point play with a free throw after he was fouled scoring on a layup. Father Sung followed with a 3-point shot beyond the arch to expand the advantage to 10 in less than a minute’s time.

“I’ve only been a priest eight months — it’s been a beautiful journey, not without some challenges — but there are many priests I hadn’t even met until today,” said Father Sung. “Promoting and building fellowship is one thing, but showing it to the public is another with an event like this.” 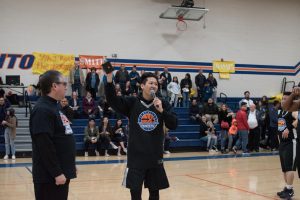 Father Humphrey pointed out that three deacons on Team Seminarian — Jonathan Nestico, Justin Oh and Filiberto Cortez — are primed to join Team Priest next year. Not a moment too soon: Team Priest's roster had 11 players compared to the 20 on the Team Seminarian side, yet they never trailed in the contest despite being far outnumbered.

“It’s so good to see everyone develop these bonds with Christ,” said Father Humphrey. “The communion of love in Christ we share at Mass or in prayer groups happens here in a different form, through sport. The Holy Spirit is working.”

Father Mike Perucho, associate vocations director, is working as well. He said that among those discerning the priesthood who attended the 2019 event, Donald Melgarejo from Commerce was one of them. Not only has he since joined the seminary, but he was also in the seminarians’ starting lineup Friday.

Among the new faces on the priests’ roster was Father Darrin Merlino, CMF, from San Gabriel Mission Church.

“I really enjoy being a priest, and playing with these priests shows it’s like a fraternity that’s no other,” he said. “We do all we can to support the seminarians. I just thought the 48 minutes we were playing basketball together, it was that taste of joy that we’ll all have in heaven.”