Jubilee pilgrims celebrate ‘being together’ again on LA’s streets

As Maria Gaetano took the final steps of her pilgrimage arriving to the Cathedral of Our Lady of the Angels last Saturday, it was hard to fathom she’d just walked nearly 11 miles in six hours, passing by and through traffic, churches, homeless encampments, smiling faces, and honking car horns. She hardly seemed tired or walking at all; more like floating.

“It was awesome,” she said as she entered the cathedral for the pilgrimage’s closing prayer service.

Judging from the beaming faces around her, the feeling was shared by the more than 2,000 pilgrims who participated in the “Camino: A Walk with Jesus,” from Mission San Gabriel Arcángel to downtown LA.

The walk was part of the ongoing celebrations for the “Forward in Mission” Jubilee commemorating 250 years since the founding of Mission San Gabriel and the birth of the Catholic faith in the Archdiocese of Los Angeles.

Pilgrims took up the opportunity to give glory to Christ in the middle of Lent, but they also came away with a tangible experience of how the archdiocese, vast as it is with its nearly 300 parishes, is, in Gaetano’s words, “connected by this great faith.”

Again, the feeling was shared by the other participants who sang, prayed, joked, and celebrated upon arriving at the cathedral courtyard with friends and family, in languages audibly demonstrating the archdiocese’s great diversity — Spanish, Tagalog, Vietnamese, Korean, and Polish, to name just a few. Of course, some simply employed the universal language of “Woo!” and “Yeah!” 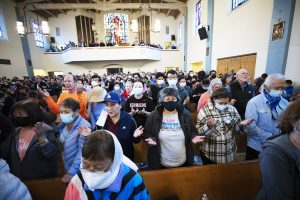 Pilgrims during Mass at Mission San Gabriel before the start of the "Camino" pilgrimage April 2, 2022. (Victor Alemán)

Standing at the head of the pack of pilgrims, Archbishop José H. Gomez led the procession from the mission in the morning. During an 8 a.m. Mass offered just before the procession started, he reminded the pilgrims that life itself is a “pilgrimage to the promised land of heaven, to our Father’s house.”

“With joy in our hearts, let us commit ourselves again to building God’s kingdom in Los Angeles,” said the archbishop in his homily. “In America. And throughout this continent. We are called to change the world through our love, to save souls and to create a beautiful society that serves human dignity and social justice.”

More than 300 members of the archdiocese’s Vietnamese Catholic Center took up that call. Ryan Bui, president of the organization, said the walk was “very meaningful to us,” since its members, from 15 parishes, looked upon the archdiocese as a “second homeland once we left Vietnam.”

Bui said his group wanted to participate because “we want everyone to see that we are Catholic and we want to proclaim it to everyone.”

Part of that proclamation was made by the things pilgrims carried. Relics of saints who visited LA during their lifetimes, including St. Mother Teresa, St. Pope John Paul II, St. Junípero Serra, and St. Frances X. Cabrini accompanied the group during the walk. Others held signs, banners, and crosses. A few packed pom-poms, another played the ukulele. All had myriad reasons for making the trek.

Tanya Guzman said she “wanted time with my husband, without our kids, to be able to think, to get some clarity about things,” then added with a wry smile, “Of course, I don’t know if it’s going to be that way once we get to LA. That’s OK. This is something to celebrate our faith and just a chance to spend some time with my husband.”

Guzman’s friend Leslie Alejandre was hoping to recreate the feeling she had when doing a pilgrimage in Assisi, Italy. She remembered that walk, which required managing a steep incline to reach the city of St. Francis, as “hard, but super satisfying. It’s special to walk with people who are like-minded. It intensifies your faith and makes you feel good.”

That feeling radiated as the pilgrims walked. Their journey was logistically managed with traffic officers riding ahead and behind. Every few miles they stopped at a Catholic church, where they were welcomed with a place to rest, a church to pray in, water, sunscreen, and snacks. And, of course, broad smiles and warm hugs. 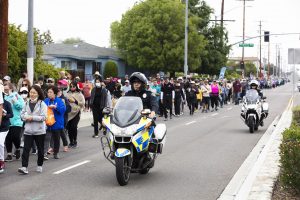 Carlos Linares was one of numerous volunteers at All Souls Church in Alhambra who welcomed the pilgrims with waving flags and “Woos!” of their own. Linares, a high school junior, volunteered to get required service hours, thinking it would be “just another day of service.”

“But now that I see this, I’m really glad I came,” said Linares. “That’s what God does, he connects us. When God shows us love, it inspires us to show other people love, even if we had never met them.”

The pilgrims were certainly shown love at each parish they visited along the way: All Souls Church in Alhambra, All Saints Church in El Sereno, and Our Lady Help of Christians Church near Lincoln Heights. The group was given lunch at Cathedral High School.

“The parishes were so hospitable, so welcoming, and were so pleased to welcome these pilgrims to their homes,” said Father Parker Sandoval, vice chancellor and senior director of ministerial services. “It shows we are one big family. Yes, we all have parish families, but we are also one great Catholic family, we all love Jesus.”

In fact, many pilgrims felt as if seeing these parishes, perhaps that they’d only heard of or passed by in their cars, was in some ways a long overdue family reunion, one facilitated by taking the time to slow down.

“If it wasn’t for this pilgrimage, I would have never set foot in All Souls,” Gaetano said. “Every time we got to a different parish, it felt like we were attending a family gathering. I think sometimes we feel like we’re on an island, all by ourselves, but we’re not. It helps to get out and realize we’re connected by this love and praise we have for Christ.”

Gaetano said that the pilgrimage was so successful that she hoped to get a few minutes with Archbishop Gomez to ask “if this is something we could do every two or three years.” 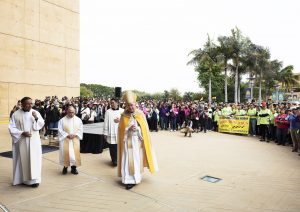 Archbishop José H. Gomez welcomes pilgrims to the Cathedral of Our Lady of the Angels before the closing prayer service for the "Camino" pilgrimage. (Victor Alemán)

Whether the walking route was 10 or 11 miles seemed to be a source of ambiguity among the walkers, and Archbishop Gomez joked at the closing prayer service that he would leave pilgrimage organizers to figure it out. But even he admitted that its length seemed daunting at first.

“I don’t know how you were feeling coming, but I was praying, asking Jesus to make sure that I was able to make it to the cathedral,” confessed the archbishop. “And I felt the presence of God the whole time during this … let’s say, 11 miles.”

Such thoughts were surely shared by his fellow pilgrims, as well as the joy of “just being together after these long two years of pandemic,” that Archbishop Gomez alluded to at the service.

Father Sandoval, who donned a blue “Forward in Mission” t-shirt over his black clerics during the day’s festivities, had similar feelings.

“I feel like the Holy Spirit was with us,” Father Sandoval said. “The joy among the participants, the beautiful spirit is what this is all about. It is witnessing to the joy of walking with Jesus. After two years of being locked up, it’s beautiful to see the Church out on our streets and fully alive.”