Inmates get a taste of Christmas joy during Archbishop's jail visit

To an outsider, the signs that this is no ordinary Christmas Mass are obvious.

Posted from what resembles a choir loft, deputies in riot gear from the Sheriff’s Emergency Response Team keep watch as inmates wearing blue, light green, and white jumpsuits file inside the drab, windowless chapel on the third floor of Men’s Central Jail in downtown Los Angeles.

The jail’s priest chaplain, Father Paul Griesgraber, fist-bumps the men as they walk in. Once they’re seated, a female deputy has to ask them to quiet down. “We’re in church!” she reminds them.

But when the Mass’s celebrant, Los Angeles Archbishop José H. Gomez, preaches on the significance of what the Church is celebrating today, the message of his homily is the same as the one he gave at the Cathedral of Our Lady of the Angels at Midnight Mass just a few hours earlier.

“It’s not that God wants to be with us in some extraordinary way,” the archbishop tells the inmates. “God becomes a little child in a manger, small and defenseless.” 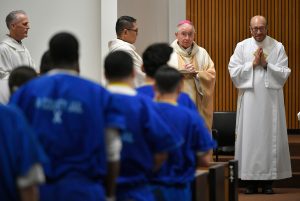 It’s a message that seems to have the full attention of today’s congregation.

To make his point, the archbishop could have used examples of some of the crimes many of these men are accused of: robbery, kidnapping, domestic violence.

Instead, he reminds them that “God loves you whether you’re a Lakers or a Clippers fan,” or whether they support Chivas or América [two of Mexico’s major soccer teams].

Although, if you like América, “there might be something wrong,” cracks the Mexican-born archbishop, himself an avid supporter of the Rayados of his hometown of Monterrey (who were playing América the next day).

Here the crowd of jumpsuits breaks into laughter, forcing the archbishop to pause.

“I don’t know where I was,” he admits once the laughter subsides, to the delight of the inmates, who give him a rousing round of applause in the middle of the homily, a sign that even here, in this overcrowded jail, there can be Christmas joy. 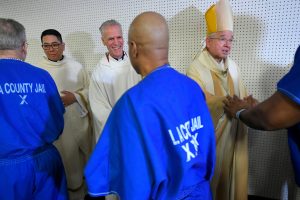 Celebrating the morning Mass for inmates has been a Christmas tradition for the last several Catholic archbishops of Los Angeles stretching back decades. Following custom, Sheriff Alex Villanueva and his wife also attended, as did several deputies, jail staff, and members of the media.

“This is the beginning, a spiritual awakening for them,” explained Villanueva.

After the Mass, Archbishop Gomez made the rounds through the restrictive housing unit, where the jail’s most dangerous, high-risk inmates are kept in single cells.

As he stopped at each cell to greet the inmates and give them this year’s Christmas gift (a copy of the book “Tattoos on the Heart” by local priest Father Greg Boyle, SJ, founder of Homeboy Industries), some stretched out their hands for a blessing, others showed him what they were reading. One even flashed a gang sign to say thanks. Others just wanted to make the most of their few seconds with the archbishop. 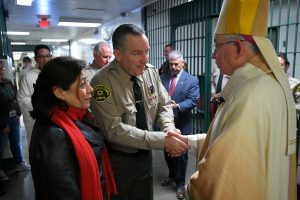 “Can you pray for me, sir?” asked one inmate through the green bars.

Blessing the young man, Archbishop Gomez prayed for peace in his life and for his family.

Father Griesgraber says that when it comes to prayer, the men in their jail cells teach him more than he can teach them.

“There’s nothing between them and God,” explained the priest, who visits with inmates and celebrates Mass with them at the jail every Sunday.

“Their family, their life, their freedom, anything that’s important for them has been torn away. They’re in a simple situation with nothing in between them and God.” 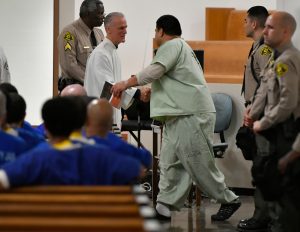 That reality leads some of the men Father Griesgraber visits to thank God for the simplest of things: the fact they woke up in the morning, that their feet still move, for their pals down the hall.

Thirty-nine-year-old inmate Nicholas Gaona is one of them. He said he’s grateful for the time in the jail, despite its reputation for overcrowding, unsanitary conditions, and scandals involving deputies in the past.

When he was first sentenced to 21 years in jail for drug charges, the Fontana native remembered, “I used to think I had the answer to everything.”

“But being in here, I realized I didn’t know anything,” he added. “This place has helped me to grow immensely, to be less judgmental.” 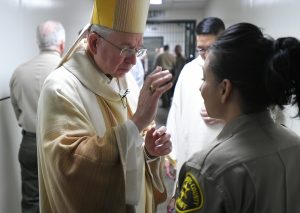 Gaona had been looking forward to this year’s Mass, especially the archbishop’s presence, he said. The father of three children, he’s found hope in attending Sunday Mass (when his job allows), praying in his cell, spending occasional time with his kids through a program for inmate fathers called “Malachi Dads,” and helping other inmates.

“This place will eat you alive if you let it,” said Gaona. “It’s amazing what you can do to help somebody just by listening.”

Father Griesgraber said the greatest gift for the men this Christmas was the human touch that the Mass allowed the inmates to feel.

“They want to break open, to be a part of the family,” the priest said of the inmates. The mid-homily applause for their special visitor, he believes, was a perfect sign of that.

“He broke through the ice, and they were ready to be with him,” Father Griesgraber said of the archbishop. “It felt like Christmas at home with the family.”