Born April 9, 2015, at Lenox Hill Hospital in New York City, Larissa and Matt Sonnen named her Layla Paige, Layla after Eric Clapton’s hit, a golden-oldie favorite of theirs. The 5-pound, 6.8-ounce baby girl passed all her newborn tests. Her parents were overjoyed. Layla was going to be the perfect sibling for her 2-year-old brother, Luke.

But at her three-month checkup, their pediatrician discovered something called hip dysplasia. Her right hip joint was partially dislocated, and her left was not completely formed in its socket, either. Layla had to seek immediate treatment from an orthopedist at New York Presbyterian Hospital.

To complicate matters, that very weekend the Sonnens were moving back to Southern California, where they would be closer to family and friends. So they were referred to another orthopedist at Children’s Hospital of Los Angeles, who they saw the same day they arrived here, for further hip treatments.

Two weeks later, on Oct. 26, the Sonnens brought her home.

“I just remember it was five in the morning, you could hear her breathing really rapidly,” Larissa told Angelus News. “These short quick little breaths. And I looked over at her, and her little fists were right in front of her face. And she was really rigid, and her eyes were darting back and forth, back and forth.”

The ensuing 911 call started off a chain of events: a new pediatrician, ultrasounds, MRI and EEG scans, all of which led to a devastating diagnosis.

Even in the moments when their daughter looked so calm just lying there, doctors informed Larissa that Layla was, in fact, having multiple silent seizures called infantile spasms.

“Right now, do not look these words up on the internet,” Larissa remembers a doctor telling her the moment they came to deliver the news. “You just start asking for prayers.”

Layla spent the last four weeks of her life under the watch of Torrance-based TrinityKids Care, a program of Providence St. Joseph Health.

When asked how children’s hospice differed from that of adults, clinical supervisor Margaret Servin explained that those in the program have to approach patients’ loved ones with a different mindset.

“The parents don’t want to hear ‘hospice,’ ” Servin said during an interview with four TrinityKids Care workers at the program’s headquarters in Torrance. “There’s a miracle that’s going to happen. So for our staff, it gives them more challenges, because we know what’s happening, but the parents sometimes don’t want to talk about it. You’re not allowed to go there, because it’s not going to happen to their child.”

The program’s chaplain, Gustavo Lopez, said the real miracle is when those parents understand.

“It’s helping the parents achieve peace, so they can enjoy those moments with their dying kid,” Lopez said. “We all see the difference when a family comes to that point of accepting their child is dying. But it’s much tougher when they don’t.”

When it comes to miracles, nurse Elba Roach recalls being struck seven years ago going to a home in the San Fernando Valley with the hospice team.

The doctor said to the mother of a dying child, “You know, we as parents pray for a miracle, but we’re praying for a miracle that we want. But that miracle isn’t probably going to take place here on earth. It may. But the miracle may be granted up in heaven.” 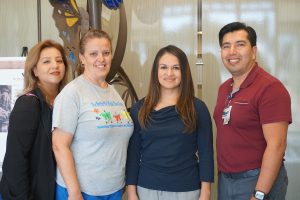 One of the most heart-wrenching parts of the job is when, and whether, to tell their patients that they’re dying. Of course, the younger ones didn’t know, and wouldn’t be told. For adolescents and teenagers, however, it was a family-by-family decision.

Nurse Ilce Salgado says it’s especially difficult when a patient directly asks her if they are dying, but the parents had said not to. She spoke about an 18-year-old dying boy who just weeks ago wanted to know just that.

“He said to me, ‘I know the changes I’m having are different from other times. I know it. I’m getting worse. But I wish somebody could just be straight with me and tell me the truth,” Ilce recalled, wiping an eye.

“But his mom was standing up right behind us, and she had told me not to tell him. Facing him, it was so hard for me to just stay quiet. But then I asked him how would you feel if it’s true this time was different.

“He said, ‘That’s OK. I would deal with it.’ So he was hopeful, but he wanted to know the truth, and I couldn’t really tell him. And that was the last visit. It was hard.”

Sitting beside her, Roach tried to offer a different perspective. The joys, he assures, “are so many and so incredible.

“Being there when the patient is dying, is actively transitioning … it’s such a sacred space for the family to let you in and walk beside them on this journey. I mean, that’s a privilege. Not everybody gets to do that.”

Later Servin pointed out that none of the program’s chaplains are priests. Still, local parish priests provide whatever sacramental needs (Holy Communion, confession, last rites) a Catholic patient might have.

Servin also stressed how the work was truly a ministry. “It’s a calling for sure,” she explained. “If they are not called to do this, they don’t last very long.”

ACCOMPANIED TO THE END

Results from tests showed that Layla’s brain never fully developed, although her eyes, ears, and nearly everything else did. But her undeveloped brain could not interpret messages from them. There were brief moments, her mother said, when her brain did quiet down, and she could actually see and hear.

Still, there was no prognosis of how much longer she would survive.

During her first year, she was in and out of Children’s Hospital for one seizure after another. At one point, Layla had a team of 19 doctors and therapists, which required additional visits to UCLA and USC. And whenever she had another convulsive attack, any cerebral development she’d made was erased. “It was like two steps forward, eight steps back,” recalled Larissa. 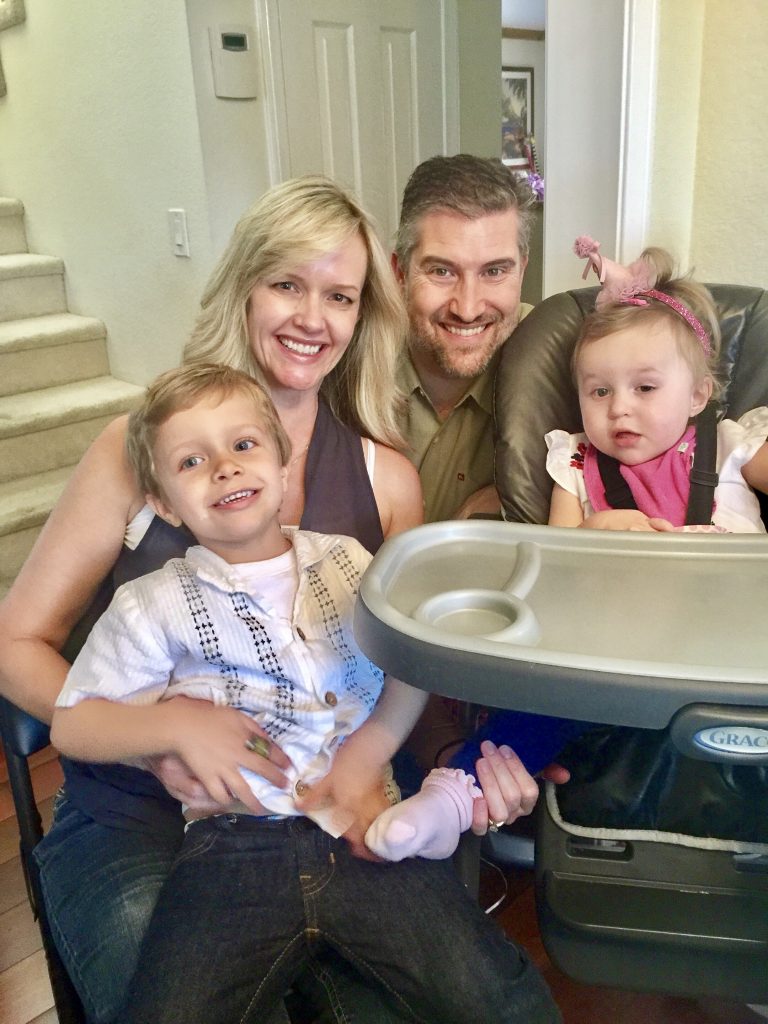 From left: Luke, Larissa, Matt, and Layla Sonnen at Layla's second birthday party in 2017 at their home in Redondo Beach. (Sonnen Family)

They started calling Layla their “Little Warrior Princess” because of how hard she fought, and all the therapies she endured: physical therapy. occupational therapy. vision therapy. hearing therapy, and multidisability therapy.

“It wasn’t very easy because she had a tube to be fed from a pump most of the hours [of] a day,” the mother added. “And she was getting medication every two hours through another tube through her stomach. Plus, there was the IV pole and carriage.”

The big question concerning Layla was now about pain. Was she suffering during the seizures? Larissa believed she was. She looked like she had her finger in an electrical outlet and would scream at the top of her lungs. Before her second birthday, she seemed uncomfortable most of the time. She wasn’t sleeping and cried out at night.

Hospice care had been suggested before for Layla. Like so many parents put in her position, Larissa felt that path was giving up hope. She just couldn’t do that as her mother. And even when Layla’s health was obviously getting worse, she kept pushing back on the idea, thinking, “No, she’s strong. She’ll get through this. This is just a phase.”

But after she had exhausted every possible hope, and her baby girl’s health kept declining, Larissa relented. She agreed to talk to somebody from a Catholic hospital children’s hospice program called TrinityKids Care.

Eventually, she found herself around at her dining-room table with the program’s medical director, Dr. Glen Komatsu, along with two social workers, two chaplains and two nurses to discuss what the last days of her daughter’s life were going to be like.

At this point, members of the team explained, it was really a question of pain management.

A grief counselor later visited the home. Layla was in her mother’s arms when Larissa was asked three questions: “Do you feel Layla is safe right now?” “Do you feel she’s safe where she’s going?” And finally the hardest: “Have you given her permission to go?”

That evening, after kissing Layla good night, her mother finally said out loud to her daughter, “Layla, if you need to go, it’s OK. Mommy loves you. But if you need to go, I understand. But I love you.” Matt repeated those same words.

No more than 20 minutes later, their daughter let out a huge breath while in her mother’s arms. Layla Paige Sonnen died on July 8, 2017. She was almost 2 1/2 years old.

A chaplain from TrinityKids Care spent time consoling Layla’s older brother, and members of the team made a point of giving daily comfort to his parents.

“Dr. Komatsu helped my husband as the father seeing things in a different way than me,” Larissa pointed out. “And the team helped me being the mom whose husband travels a lot. So I felt that I had to be the strength, the pillar for everybody. But when that team came in, all of a sudden I could just crumble and just cry and just say, ‘I am so scared.’

“We had the support of this huge team,” she stressed. “It wasn’t just one person. Somebody contacted us every day. If it wasn’t a phone call, they would come out to our home. They were just amazing. I’m so grateful, I’m so thankful. I can tell you we would not being doing as well today as we are, if it wasn’t for them.”