Two Catholic elementary schools separated by less than two miles in Boyle Heights illustrate how in the times of COVID-19, no two schools are the same.

Resurrection Catholic School has been welcoming back students grades TK-2nd since the end of January. During their first days back, which coincided with Catholic Schools Week, students were invited to dress as essential workers while learning about vocations.

But the fourth-grade son of Catalina Saenz, the school principal, was not among them.

“He’s crazy to come back,” said Saenz, who also has daughters unable to return to their middle school or high school. “He needs the interaction, and when you see them starting to dislike school the way it is, you get worried they’re losing interest.”

As long as Saenz can keep parents coming to training sessions in order to get back as many of the 215 enrolled students who want to return to campus, she sees the payoff. 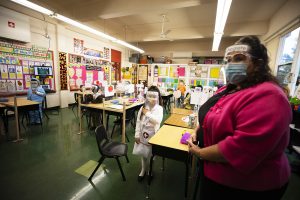 Children in Maria Negrete’s kindergarten class at Resurrection School in Boyle Heights say the Pledge of Allegiance on the first day of Catholic Schools Week on Feb. 1. Students were invited to dress as essential workers in honor of their efforts during the COVID-19 pandemic. (Victor Alemán)

Saenz noted the case of one second-grader who was back on the first day his class could do so, just days after attending the funeral for his father, who was buried on his 51st birthday, a victim of COVID-19.

“Maybe the death of someone that close would cause the family to be more fearful, and we have seen that and respect that,” said Saenz. “But here is a parent who just lost her husband, and she feels it’s important to have her son back, not sad and at home focused on this new pain. He gets classes and recess and engagement.”

Resurrection Church pastor Msgr. John Moretta said applying for the waiver required a “massive amount of paperwork,” but that the sight of children returning to campus Feb. 1 made it worth every signature.

“I’m proud of what our school is doing as we keep taking baby steps,” said Msgr. Moretta. “What parent wouldn’t want their children at school?”

Five minutes away on the other side of the East Los Angeles interchange, another principal with his own kids enrolled at his parochial school faces different circumstances.

Our Lady of Talpa School expects to stick with remote learning for the rest of this school year.

That means while principal John Rojas is at his school office, his kindergarten son follows lessons from home.

Rojas said many factors played into the decision, including the fact that his school is one of about 30 who partner with Catholic School Collaborate.

The LA-based nonprofit focused on grade schools in lower-income communities offers a software package of lessons that allow even 4-year-olds to log onto an iPad and click into their Zoom class. Adaptive software metrics also allow teachers to track progress, perhaps more precisely than if they were in the classroom. 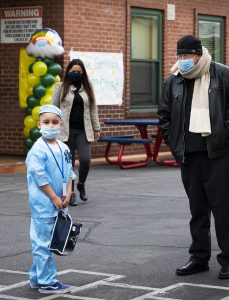 “We have a consistency with our routine in place now, so we opted to give our parents that peace of mind in something we value,” said Rojas, who said nearly a third of the school’s students have had either themselves or an immediate family member hit with COVID-19.

Word of mouth about the software among parents led to Talpa’s enrollment increasing by 10 students during the lockdown.

When Rojas held a Zoom meeting with parents last month to talk about reopening, he was surprised to hear so many asking if distance learning could continue.

“We expected pushback,” Rojas said. “That surprised us. This makes most of them feel safe.”

“We know distance learning is not ideal, and won’t be forever, but the kids are still learning,” he added. “It may have forced us to evolve in a way that makes us more sustainable in the years to come.”

For Saenz, the key to making reopening decisions during the pandemic rests in listening to parents, and understanding the needs of each family.

“There isn’t a perfect solution,” she said. “It’s knowing the pulse of your own school.”