What is immediately apparent when visiting the campus of Cathedral High School is the striking, panoramic perspective of downtown Los Angeles, skyscrapers seeming to rise out of one of the end zones of the school’s football field — go Phantoms!

Not so obvious, at least to the outsider, is what the campus produces more of than any other Catholic school in town: exceptional numbers of young men who choose to pursue a religious vocation.

No, for that, you need a perspective not of distance but time, so consider this: When Daniel Garcia was ordained a priest this summer at the Cathedral of Our Lady of the Angels, he became the seventh Cathedral alum (Class of 1992) to choose the religious life in just over a decade.

Coming off of National Vocation Awareness Week (Nov. 1-7) and the urgency to foster vocations at the local, national, and global level, it’s natural to ask: What is Cathedral’s secret?

Turns out, the secret is there is none. In talking to some of the “Phantoms” who have answered God’s call, they made clear there are no magic words or gimmicks, but that what distinguishes Cathedral’s success is as apparent as its view of downtown.

“In the last couple of decades, there’s always been at least four brothers and up to seven [on campus],” said Brother Chris Patiño, a Cathedral alum (Class of 2002), who later returned to teach at the school.

“I know as a student this made a great impact on me. While most of the faculty and staff are laypersons, the commitment of the brothers to continue their presence at Cathedral is significant.” 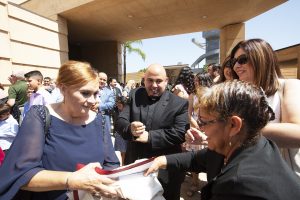 Cathedral High alumnus Danny Garcia with family after his diaconate ordination at the Cathedral of Our Lady of the Angels in 2019. Garcia was ordained to the priesthood for the Archdiocese of Los Angeles this summer. (Victor Alemán)

Indeed, at a time when religious men and women are fewer and far between at many Catholic schools and congregations, when their very presence is treated as an occasion as opposed to an everyday occurrence, the daily, consistent presence of the brothers, in habit, provides both modeled behavior as well as a constant reminder of what a religious life looks like and the very real-world effects it can have.

In other words, Cathedral’s all-male student body knows that such a life is not only available, but attainable.

“There were quite a number of Lasallian Brothers who were present on campus and always available to the needs of the students,” recalled Rev. Canon Joel Estrada (Class of 2003), today a priest of the Institute of Christ the King Sovereign Priest and pastor of St. Patrick Church and Oratory in Waterbury, Connecticut.

“[That] helps us remember the brothers’ commitment to their vocation in teaching and following the charism of St. John Baptist de la Salle.”

St. John Baptist is credited with starting what we think of as modern Catholic education. The Christian Brothers, the order he started to educate working-class children, has operated Cathedral since its founding in 1925 by Archbishop John J. Cantwell. As with any institution that’s been around for almost a century, Cathedral has experienced its ups and downs, none further down than when the Archdiocese of Los Angeles announced it was closing the school in June 1985.

Ultimately saved (in large part to the efforts of then-Archbishop Roger Mahony), the school saw enrollment shrink to about 300 in the mid-’90s, before rebounding to a healthy 700 young men today.

Those young men, the religious will tell you, feel a kinship and connection to those who went ahead. Take Guillermo Alonso (Class of 2014), a seminarian of the Archdiocese of Los Angeles currently studying for the priesthood at St. John’s Seminary in Camarillo. As a freshman, Brother Chris was his religion teacher. When Brother Chris attended Cathedral, he was close friends with Ryan Resurrecion, who would enter the Carmelite order and become Brother Ryan Resurrecion. 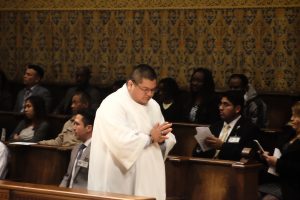 Seminarian Guillermo Alonso at the rite of Institution of Acolyte at St. John's Seminary in 2019. Alonso graduated from Cathedral High in 2014.

“The school is without a doubt special, and the Lasallian spirituality and teachings of St. John Baptist De La Salle that the brothers form us with have a lot to do with how young men there can see the religious life as a possibility,” Alonso told Angelus.

To that end, when Brother Chris taught at Cathedral, he helped form a “vocations club” that allowed any student to listen to various vocational stories, religious or not. Brother Chris said being able to have a real relationship with the brothers was a key in drawing him to the religious life.

“Seeing how the brothers lived out the ministry of education became really attractive,” he said. “Of course, like many vocation stories, much of it had to do with the personal relationships I was able to establish with the brothers. During my time as a student, two brothers taught me, the president and principal were brothers, and for two years the campus minister/service coordinator was a brother. It was the latter who I really connected with and which provided a path to really coming to know the brothers’ community.

“They were very intentional about inviting groups of us to dinner and prayer. Their availability it seemed was 24/7, and that also made a huge impression on me. I truly tried to live out this kind of spirit when I became a brother and was assigned to Cathedral High School years later. In short, being drawn to teaching, a desire to serve, and the dynamic presence of the brothers at Cathedral planted the seeds during high school toward religious life.” 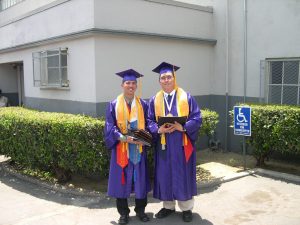 Future priest Joel Estrada (left) with the future Brother Ryan Resurrecion at their graduation from Cathedral High in 2003.

It is seeing the religious life lived, every day, that each man agreed helped give direction to their own lives. As Brother Rafael Rodriguez (2013), a novice brother pointed out, the religious at Cathedral do not only participate in religious matters but in all aspects of student life.

“Students continue to be accompanied by these educators after school in sports, clubs, theater productions, but most importantly in the relationships that are cultivated by the students with one another,” he said. “The students are able to put into practice what they see being modeled by the adults around them with one another.”

And it’s an interesting thing about that word “modeling.” Yes, it can mean behavior, but the men agreed it can also quite literally mean how one presents themselves physically, that seeing the brothers in full habit daily reminded the students not only who these men were, but of the commitment they had made.

“It’s unique in that amidst the world of modernism where many religious would forgo wearing their religious habit, the brothers at Cathedral wore their habit, which I believe is an important visible way of being a witness to Christ,” Father Estrada said. 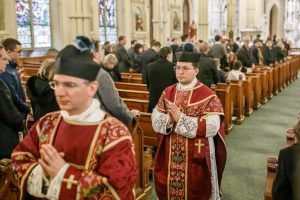 “It is not at all a sign of clericalism, but a sign that they are consecrated and set apart in order to fulfill their vocation in teaching others and lead others to Christ.”

To illustrate his point, Father Estrada mentioned that, not too long ago, he was attending a diocesan-wide meeting with other priests. As usual, he wore his priestly blacks while chatting lightheartedly in a hotel lobby with other priests dressed in plain, casual clothes.

“It was interesting to note that some other people who entered the lobby immediately walked toward me and asked which parish I belonged to, and that they were happy to see a priest in full habit,” he said.

“They did not realize that there were other priests around me, which I later pointed out to them. Truly, a visible sign of our vocation helps speak a silent but powerful message to all who see our religious habit. I thank Cathedral High School and the brothers for helping me foster that holy example.”