For SoCal folklorico group, dancing is an act of faith

They come from all walks of life — psychologists, lab technicians, post office workers, public school employees, college students, and even a director of human resources.

They are led by a man who grew up in Watts, hung out with African American friends, and knew next to nothing about his own Mexican heritage — or, for that matter, how to speak Spanish.

They practice next to a Reseda church in a residential area, making sure they are quiet and respectful of their neighbors, which is a challenge, because folklorico dancing is, if nothing else, a joyful, artistic expression part of Mexican culture tied deeply to the faith.

“Folklorico dancing is part of our Catholic faith, and we share it with others just as the Church shares its faith with us,” said John Estrada, founder and director of Grupo Folklorico de West LA (GFWLA), which for 44 years has performed throughout Southern California, including the recent Santa Barbara Fiesta Days.

“For us, to perform is to acknowledge and celebrate our faith and express our love for our culture,” continued Estrada, a parishioner at St. Catherine of Siena Church in Reseda. “The way I see it, I’ve been given a gift to share, and I do so in the name of the Father, the Son and the Holy Spirit.”

That faith and skill was on display last month at Santa Barbara’s Old Fiesta Days, where GFWLA has performed for more than 30 years. That tradition was interrupted in 2020 by the coronavirus pandemic, and this year’s performances nearly suffered a similar fate over concerns of the recent surge in COVID-19 cases.

But although several traditional Fiesta events were canceled — including the opening Fiesta Pequeña at Mission Santa Barbara, traditionally hosted by the Franciscan Friars — GFWLA was able to perform at two smaller open-air venues, Nuevo Paseo and La Cumbre Plaza, much to the joy of its members and Fiesta audiences that included Auxiliary Bishop Robert Barron of the Santa Barbara Pastoral Region.

“The audiences were very gracious,” said Annabelle Baltierra, a GFWLA member for the past 16 years, and senior director of Human Resources for the Archdiocese of Los Angeles.

So was Bishop Barron, who came to give the group a special blessing.

“He lifted our spirits and we told him how we offer our performances up to God and our ancestors, especially when we dance Azteca,” said Baltierra.

Baltierra, who had been in professional folklorico groups previously, said she was drawn to GFWLA by its focus on faith.

“In the other groups, there was a lot of yelling and a lot of ‘practice till you drop,’ ” said Baltierra, the daughter of Mexican immigrants. “Coming to this group in a more family-oriented, parish-centered atmosphere has been wonderful. We talk about our faith as Catholics. We are aware of how lucky we are to incorporate our faith into performances.”

“And dance speaks to so many of those traditions. It’s a chance to express our joy for the gifts God has given us. And,” she added, smiling, “we just love to dance.” 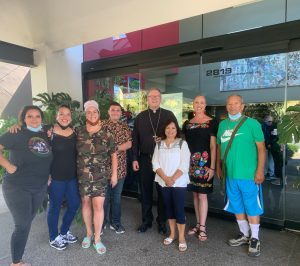 Admittedly, there was a time in his life when Estrada would never have figured he would become so deeply involved in anything like Mexican folk dancing.

“In Watts during the 1960s,” he recalled, “a lot of the focus was on the African American culture and community, where I had a lot of friends, but we weren’t really talking about Latino culture then.”

That changed for Estrada in 1966 when he attended a performance of Ballet Folklorico de Amalia Hernandez at the Hollywood Bowl. “I was inspired,” he said. “I knew no Spanish, or much of anything about my culture, but when I saw Ballet Folklorico I thought, ‘I wish I could dance like that.’ ” 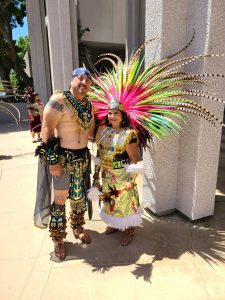 Estrada became a professional dancer and teacher, attended local and national conferences and workshops, and in 1977 formed GFWLA, celebrating the Mexican folk dance experience. GFWLA now includes 25 in its adult group and 12 in its children’s group (ages 3 to 14), and performs both Folklorico and Danza Azteca.

In 1979 he and Sue Welsh organized “Danzantes Unidos Festival,” which continues today, bringing together Mexican folklorico groups from California and beyond, to study and celebrate the music, dance, history, and costumes of Mexico.

“It’s about sharing our work with our community,” said Estrada. “Since the 1970s, I have always encouraged people to share with the community what you are learning, whether it’s song or dance, whether you’re a doctor or nurse or lawyer or teacher. Go back to the community and encourage people to strive to be better.”

Now retired after 30 years with Los Angeles Unified School District as a conflict resolution counselor, Estrada still finds it remarkable that “a guy from the streets of Watts” could be a leader in the folklorico movement.

He feels blessed to have learned and passed down his love for Folklorico and Danza Azteca to his family and students over the years. His wife, children, and grandchildren all participate in GFWLA, and daughters Josie and Rachel are choreographers for the ensemble.

“I’m proud they are carrying on this tradition,” Estrada said. “That’s a beautiful testimony to our faith and our culture. We’re entertainers and performers, beautiful dancers who serve the Lord.”