Father Boyle on 30 years of Homeboy and his new book

In 1986, Father Greg Boyle, SJ, became pastor of Dolores Mission Church in the Boyle Heights neighborhood of Los Angeles — a fortuitous appointment that would change him forever, and positively impact the lives of countless young men and women on the margins.

At the time, Dolores Mission was the poorest Catholic parish in L.A., located amid the highest concentration of gang activity in the city. In response to witnessing the devastating effects of gang violence, Father Boyle and his parish opted to take a then-radical approach: treating gang members as human beings.

And the rest, as they say, is history.

In an effort to create positive options and employment opportunities for would-be and former gang members, Jobs for a Future was born in 1988. Father Boyle eventually founded what today is known as Homeboy Industries, which has become the world’s largest gang intervention, rehabilitation and reentry program.

Father Boyle recently discussed the history of Homeboy with Angelus News, and shared highlights from his new book “Barking to the Choir: The Power of Radical Kinship.”

Angelus: Looking back today, nearly 30 years later, how has the original mission of Homeboy Industries evolved or been refined over the years — or does the primary mission remain the same as it was on day one in your view?

Father Greg Boyle: Our motto 30 years ago was “Nothing stops a bullet like a job.” Employment is essential — having a reason to get up in the morning is key. But an employed gang member can still return to prison, and an educated one also — but a healed gang member and felon will not go back to prison. That is guaranteed. So the primacy of relational wholeness and healing has taken over at Homeboy and everything else is secondary to that foundational, essential healing.

Angelus: Has the level of growth and expansion of Homeboy over the decades taken you by surprise or has it felt like a natural progression, given the level of commitment by all of those involved in supporting its success? Is it something you could have anticipated in the early days of Jobs for a Future?

Father Boyle: I never anticipated that we would be where we are today. We have listened to the folks at the margins and have responded one day at a time. We’ve evolved and backed our way into becoming the largest gang intervention, rehab and reentry program on the planet. Not one of us ... set out to do that.

Angelus: What has been the biggest obstacle Homeboy has faced to date?

Father Boyle: Funding Homeboy has been our primary challenge — always. Gang members come here in large numbers and feel great comfort and acceptance. Receiving them requires money. We’ve always been a tough sell ... especially 30 years ago, when the demonizing of this population was writ large. It’s better now, but a Da Vinci will get more people wanting to fund it than a program that helps heal tattooed felons.

Angelus: What has surprised you most about the former gang members you have encountered through Homeboy over the years? Are there certain common characteristics among those who have successfully turned their lives around?

Father Boyle: Gang members have always been the tender glance of God for me. I know the depth of our human nobility and unshakable goodness because of the thousands of gang members I’ve been privileged to know these 30 years. The day simply won’t ever come when I have more courage or am closer to God than they are.

Angelus: How is the act of ministering to former gang members an example of Christ at work? How does this ministry impact your own personal spiritual life?

Father Boyle: God calls us to have a special, preferential care for the “widow, orphan and stranger.” God thinks these are the folks who know what it’s like to have been cut off. And since they’ve suffered in this particular way, God thinks they are trustworthy guides to lead the rest of us to the very kinship of God. So, I don’t go to the margins to “make a difference.” I go to the margins, so that the folks at the margins ... make me different. 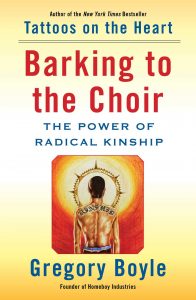 Angelus: What does the title “Barking to the Choir” mean? Is this book different or similar compared to your first book, “Tattoos on the Heart: The Power of Boundless Compassion”?

Father Boyle: [The book title] “Barking to the Choir” comes from a story mentioned in the book’s intro. [It’s a marriage of two separate sayings: “Barking up the wrong tree” and “Preaching to the choir.” It calls for a rethinking of the status quo]. Like “Tattoos,” “Barking” is a collection of stories, vignettes, images and parables from the “barrio,” sewn together in essays.

Angelus: What do you say to people who, despite the positive example of Homeboy, still have trouble embracing the concept of kinship with former gang members?

Father Boyle: If we are strangers to ourselves — and have not become friends with our own wounds — then we will be tempted to despise the broken among us. Kinship with gang members saves us from that fate.