Evangelizing through mercy and holiness emphasized at LA Congress

As she wrapped up a Saturday morning praise session based on this year’s theme of “Live Mercy, Be Holy,” keynote speaker Sister Teresa Maya, CCVI, went to the podium before thousands gathered at the Anaheim Convention Center Arena on the second day of the 2020 Religious Education Congress (REC) to talk about her grandmother.

In a moving bilingual talk entitled “Called to Compassion: Witnesses of God’s Mercy in the World,” the former president of the Leadership Conference of Women Religious (LCWR) first brought up a quote from Archbishop José H. Gomez in the 2020 REC program: “Holiness means loving God and loving our neighbor, right where we are, in the middle of the world.”

To Sister Maya, those words resonated in her “abuela” (“grandmother”), Lupita, who died in 2000 but seemed very much alive 20 years later.

She was an “ordinary person” who taught her granddaughter about prayer through her actions and “a profoundly spiritual life.” She created a welcoming community through cooking, which reinforced the ideas of inclusion and forgiveness. She actually started a parish in Mexico just by setting up a tent, finding a priest, and gathering her neighbors before an actual structure could be built.

She taught “la bendición” (“the blessing”), and the trust that the next generation “can do wonderful things in our church.”

She embraced God’s creation and enjoyed life, despite many sufferings, because “compassion creates a place for joy and hope in the world. She knew a grateful heart is a blessed heart, so why shouldn’t we be grateful? Compassion is what makes us human.”

Sister Maya’s message of encouragement was derived from the 2020 congress theme of “Live Mercy, Be Holy,” which the thousands in attendance and following via livestream and social media could experience from the Feb. 21-23 event through many different prisms. 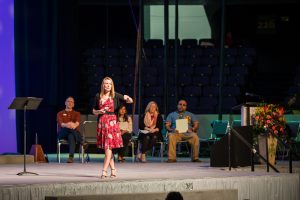 Organizers reported nearly 27,000 pre-registered for the REC, including exhibitors, and 9,000 of those were for Youth Day. More than 175 speakers attended.

Among those speakers was Julianne Stanz, director of Discipleship and Leadership Development for the Diocese of Green Bay, Wisconsin. During a five-person presentation Friday afternoon named after Stanz’s new book, “Start With Jesus,” she echoed Pope Francis’ invitation that “the kergyma needs to be proclaimed in every single ministry and activity.”

“Otherwise all of our efforts in evangelization and discipleship are condemned to sterility and will die,” said Stanz.

Stanz also moderated a discussion of the papacy of Pope Francis with Archbishop Gomez and Archbishop Christophe Pierre, apostolic nuncio to the U.S., that was streamed on Facebook Live with questions coming from both live and digital audiences.

Archbishop Gomez talked about how in a culture of division, we are called to love God and love one another.

“Once we do that, we can change culture,” he said. 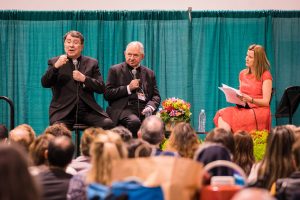 For his part, Archbishop Pierre pointed out the need to look past the modern attitude “that we can fix problems by ourselves.”

“The pope calls it an old heresy called Pelagianism,” the nuncio said. “People think that they can save themselves by themselves.”

“This is a heresy,” said Archbishop Pierre, wagging his finger with a grin.

Instead, the French prelate explained, faith is about “the capacity to say yes, to open our hearts.

“But say yes because there is somebody before, somebody who has called us, and this somebody has been there since the moment of my birth — actually, he was there before!” said Archbishop Pierre, who recalled that it was through the witness of his parents that he came to truly know “that God was there.”

“Don’t be Pelagian, please!” the archbishop pleaded with the audience.

Thank you to our Keynote Speakers, Sr. Teresa Maya and @bpdflores, for sharing with us what the Holy Spirit placed in their hearts. #RECongress pic.twitter.com/ihqv70gF80

Through the reach of social media, including the @LACatholics and @LACongress Twitter and Instagram feeds, attendees were able to share their congress experience on the digital highways.

Abraham Cervantes, a young-adult minister in the Coachella Valley based at St. Louis Church in Cathedral City, said in a video shared to social media that he was impressed by a Friday session he attended, where Sister Karla Felix-Rivera talked about the vocation not only of marriage, but of those who also discern a calling to the priesthood or of being single.

“That really filled my heart knowing the vocation is still out there and still alive,” he said.

For Joel and Nora de Loera, the decision to drive down from San Jose with their five young children (and a sixth on the way) included a promise to the kids of visiting nearby Disneyland.

Joel, who last year started a job as the director of Family Life for the Diocese of San Jose, said that many people had recommended visiting REC as part of his ongoing formation.

“I’m here to learn from other speakers and their experiences, and how I can best apply that in my ministry,” said Joel.

The REC offered plenty of workshops and networking opportunities for Catholics working in Church leadership and ministry like the de Loeras. But it also featured talks from speakers and experts addressing themes faced by everyday Catholics and young people, like addiction in families, married life, prayer, and the transmission of the faith to children. 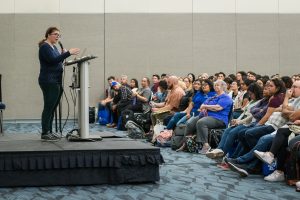 At an REC gathering that occurred somewhat earlier than in past years (it usually falls within the season of Lent) Bishop Edward Braxton of Belleville, Illinois, alluded to that timing when concluding his Friday afternoon session, entitled “Martin Luther King Jr.: What If He Were Still Alive Today.”

Bishop Braxton, who also gave a workshop about the Church and its role in helping society face the deadly epidemic of gun violence, said he believed Rev. King’s voice would have resonated today at age 91 had he not been killed at age 39 in 1968.

“With Ash Wednesday upon us, this Lent and this Easter time is exactly an affirmation of Dr. King’s simple statement: We want to be human, we want to be free.

“Jesus of Nazareth lived, suffered, and died because of his love for us as human beings. It will take the power of that same Holy Spirit to attain the society based on justice, equal opportunity, and unselfish love for every single person of every race, religion, and background, a society that dear Pastor King was fond of calling ‘the beloved community.’

“If he were alive today, the Rev. Martin Luther King Jr. would say that to do your part to bridge the racial divide in this country, all you need is a heart full of grace and a soul generated by love. And you can be that servant. Indeed, you must be that servant.” 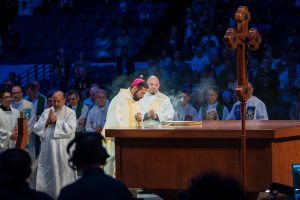 Bishop Daniel Flores of Brownsville, Texas incenses the altar at the Mass for Evangelization of Peoples Friday Feb. 21. (Isabel Cacho)

In addition to his Saturday morning Spanish address given at the same time as Maya’s, this year’s other keynoter, Bishop Daniel Flores of Brownsville, Texas, had another opportunity to preach on the importance of the kerygma, the saving power of the announcement of Christ’s death and resurrection for all mankind.

“The power of the kingdom is here, sometimes we just don’t think about it anymore,” Bishop Flores said in his homily at the Mass for the Evangelization of Peoples Friday evening.

“So before we do anything else, before we start start figuring out the plans, that ‘I’m gonna be more generous today,’ the first thing we need to do is ask the gift of the Holy Spirit for that power that makes it possible for me, for you, for all of us to love as Christ loves, which is without counting the cost and it’s not a business deal and it’s not, in the end, ‘You owe me.’

“Because that’s what gives hope to young people,” continued Bishop Flores, who noted that the average age of Catholics in his border diocese is 26. “It gives hope to all people. It gives hope to me. That’s the salt of the earth, that’s the light of the world.” 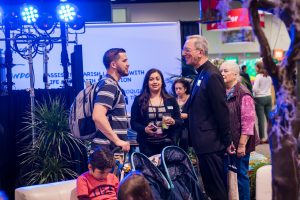 Like Flores, Archbishop Gomez also stressed that when people truly follow Jesus, “we can love without counting the cost, we can live the Gospel without compromise.”

“As Christians, we need to be at the heart of the moral renewal of our country, we need to stand up for the high moral vision that Jesus gave us,” said Archbishop Gomez in his homily at the congress’ closing Mass. “But we need to do this always with charity and compassion, and with a spirit of love and understanding.”

From the gathering’s beginning at Youth Day to its end Sunday afternoon, the theme of this year’s congress seemed to inspire its biggest names to emphasize the urgency of leaning on Christ to do the work of evangelization beyond our comfort zones.

In looking at the many ways Sister Maya remembered the actions of her “abuela,” extracting a quote from Pope Francis about “going forth” to do justice in the world took on a new meaning.

“In Spanish, I think the word ‘en salida’ works better, to go out,” said Sister Maya. “She was moved by compassion. There is no excuse for us not to go out and tell the incredible story of what Jesus has done for us. If you’re not moved to do something after being here at the congress, please pray for that strength.”