By 9 a.m. on a recent Friday, the line of mostly young mothers already stretched for a block down the sidewalk along the chain-link fence that separates Our Lady of Guadalupe School from Hazard Avenue. Nancy Figueroa, principal of the parish school in East LA, was talking to them in Spanish.

Today, not even the blue mask on her face could contain the administrator’s enthusiasm as she made sure to catch up on how their families were doing.

Slowly but surely, the women made their way to the partly open front metal gate to the table blocking the entrance to the schoolyard. A woman in a floppy brim hat and green T-shirt with the elementary school’s logo greeted them, asking how many meals they needed for their children.

Most answered “dos” or “tres.” Three women inside the gate, stationed at two longer tables stacked with cardboard boxes of plastic grocery bags with breakfast and lunch cartons, passed along orders to the server in front. She handed the bags to the waiting mothers, who responded with “gracias” before hauling away the bags with both arms.

Handing out some 750 breakfasts and lunches each Monday through Friday during the coronavirus (COVID-19) pandemic, Our Lady of Guadalupe is the busiest of 38 Catholic schools in the Archdiocese of Los Angeles involved in the national “Seamless Summer Option.”

The food distribution program from the U.S. Department of Agriculture is a pandemic-time adaptation of the National School Breakfast and Lunch program that 73 local Catholic schools participated in. Before the pandemic, the federal program offered free and reduced-priced meals to low-income students at public and private schools across the country.

Now there is no reduced price — only free. 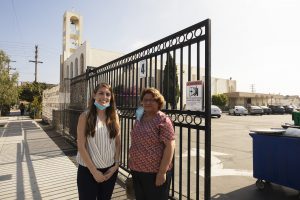 “People sometimes think that it’s only public schools providing breakfasts and lunches, because that’s all you hear about on the news,” Lilia Chavez, director of Externally Funded Programs for the Archdiocese of Los Angeles, told Angelus.

Those 38 school sites around the archdiocese provide the federally funded meals through “Better 4 You Meals,” a vendor based in Commerce. The numbers tell the story: Many of the schools serve hundreds of meals each day; then there are ones like St. Lawrence of Brindisi School in Watts (1,460 meals a day) and St. Patrick’s School in North Hollywood (1,200), for a total of 15,000 meals a day throughout the archdiocese.

The meals are intended for students under 18, but they don’t have to be enrolled in a Catholic school. No one is turned away.

What makes these food programs especially vital to struggling low-income urban families, according to Chavez, is the fact that paying the rent and utilities are usually a family’s top two priorities. So putting food on the table can come in a distant third.

“We have run out of food at some sites, but then we adjust,” Chavez explained. “Then we just increase the order. And that’s what we did with Our Lady of Guadalupe, which started giving out just 60 meals, until it’s up to 1,500 today.” 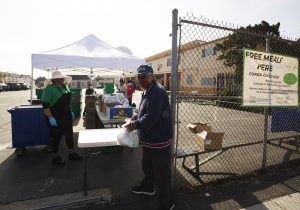 Food insecurity, or going hungry, isn’t new, even in the U.S., the wealthiest nation in the world. Before the coronavirus first appeared in the U.S. in January, more than 40 million Americans were categorized as “food insecure.” And now, with more than 30 million workers filing for unemployment benefits in the last two months, that number has been rising rapidly.

So with tens of thousands out-of-work families now skimping on food, experts say that developing school-age children — one of the groups most affected by chronic hunger — are in grave danger of not maintaining their physical and mental health.

The principal of Our Lady of Guadalupe has seen that firsthand. Decreasing attention spans and cognitive skills are often the first observable symptoms with students who don’t have enough

The principal of Our Lady of Guadalupe has seen that firsthand. Decreasing attention spans and cognitive skills are often the first observable symptoms with students who don’t have enough to eat at home.

Still, Figueroa, who graduated from the East LA school herself in 1989 and still lives nearby, thought people in the community might be too proud to show up in a food line. And she was really afraid of wasting any food.

“Lilia said, ‘It’s OK. We’ll try it out small. We can fluctuate. If we have to go down in the number of meals, we’ll go down,’ ” the principal recalled. “But instead of going down, we’ve only gone up.”

Figueroa said new patrons come from both near and far, waiting as long as they need to but sometimes fearful.

“I was talking to a family who wouldn’t get out of their car. And they asked me if they could have four meals. And I said, ‘Of course. I’m the principal.’ They’re just so grateful. So there shouldn’t be any stigma in asking for food right now during this crisis.”

“If we didn’t have this summer food program, it would be hard for these people.” 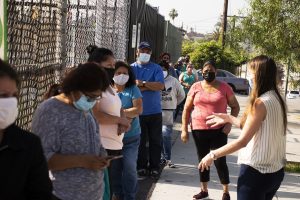 Before transitioning to the out-of-school food program, when all 265 elementary and high schools in the Archdiocese of Los Angeles closed in response to the pandemic, the principal and her staff had an even bigger transition to make. In a matter of days, the parochial school had to navigate the transition from in-class instruction to distance learning.

“We transitioned so quick,” said Figueroa with a chuckle. “It was announced on March 13, a Wednesday, that we were closing. So we sent home letters to our parents. We had a faculty meeting on Friday and a plan for distance learning on Monday. Tuesday and Wednesday we rolled it out.”

iPads and Chromebooks were handed out to parents, and by Thursday, March 19, the school’s 131 students had embarked on a homeschool adventure none of them had prepared for.

The principal said the transition had worked well. Teachers are planning “around the clock,” coming up with new weekly lesson plans, posting instructional videos in math, reading, religion, English, social studies, and science. They hold live online sessions with students four to five days a week, and answer feedback from parents.

“There’s no limit now on using Zoom video conferencing with kids, parents, and teachers,” the principal pointed out. “For second-graders, it is 45 minutes, Monday through Friday. Third, fourth and fifth grades have an hour every day. And for middle school, sixth, seventh and eighth, it’s six hours a week total.

The trade-off? “It’s actually a lot more work for teachers.”

Back at the line on Hazard Avenue, a woman toward the front was asked what she thought of the summer food program that began in March.

“I’ve been coming from the first week it started when I heard about it,” she said, but didn’t want to give her name. “This really helps my family. My kids, who come here, all get to eat. My daughter is going to graduate this year and my son is in sixth grade. And one graduated last year and goes to Sacred Heart High School.

“But it’s good for the whole community, because food is so expensive these days. With this extra food, I can also give some of our own food to my grandmother, who can’t go outside now. So the program is good for my whole family.”