The clergy of the Archdiocese of Los Angeles (ADLA) are far from immune to the challenges of securing coronavirus vaccines these days.

Msgr. John Moretta of Resurrection Church in Boyle Heights can tell his story now with some sense of humor.

The 79-year-old laughs when he tells people that he was “hoping that when I went in, someone would ask for my ID to see if I could prove I was over 65 … but no one did.”

But getting there wasn’t all that amusing to him. He tried registering online, only to see his information wiped from the form time and again as he tried to get an appointment for his first shot.

He finally set up his first shot in January. Then, on the day after Ash Wednesday, when Msgr. Moretta arrived at Dodger Stadium for his second shot, he spent three hours sitting in his car as organizers scrambled to assess if they had enough doses to give out. He eventually got it.

Still, the experience hasn’t deterred him from stressing to his parishioners in one of the LA neighborhoods hardest hit by COVID-19 to follow his lead: be persistent, ask for help, and don’t be afraid.

“I put it all out there on social media, in the bulletin, on our website — we’re asking people to go and I give them my own example,” said Msgr. Moretta, who last month celebrated his 29 years as pastor at Resurrection. “Some of them lack the confidence in taking the shot. I know maneuvering the sign-ups isn’t really user-friendly.

“But now I feel I’m on all cylinders. I’m good to go and have been very happy from my first shot. It brought me a lot of relief.” 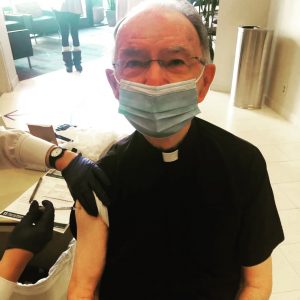 As of March 2, LA County had administered nearly 2 million doses of the COVID-19 vaccine, with about 600,000 of those as second doses. California remains the state with the most COVID-related deaths.

In his own neighborhood, Msgr. Moretta has directed people to vaccinations at places that range from the local CVS pharmacy to the iconic old Sears Tower building, as well as the campus at Cal State Los Angeles and the Keck Medical Center of USC.

Father Chris Ponnet is the chaplain at Keck and at LA County USC Medical Center. He believes he was the first ADLA priest to be vaccinated in late December with the Pfizer dose.

In addition to protecting his own health and those of his fellow chaplains as they minister sacraments to the sick and infirm, Father Ponnet has also preached the importance of getting the shots.

“I felt it was very important to post my photos, invite others who sadly may be fearful and be saying negative things,” he said, who lost his 52-year-old niece to the virus. “This isn’t only professional, but very personal. It’s important to be a witness and say this is an act of a pro-life ministry.”

Almost a year ago, Msgr. John Barry, pastor of American Martyrs Church in Manhattan Beach, survived his own unnerving bout with COVID-19. Nonetheless, the 83-year-old was one of several South Bay clergy members from different denominations to take up an offer by Torrance Memorial Hospital to receive the Pfizer vaccine.

The hospital said it received a waiver for local clergy who volunteer at the hospital to help its employed chaplain, thus meeting the definition of health care workers.

Even though Msgr. Barry’s doctors told him he had built up enough antibodies to fight the virus going forward, getting the vaccine was a matter of trusting their advice.

“Pope Francis encourages everyone to be vaccinated,” said Msgr. Barry, at American Martyrs since 1983. “However, I respect the decision of those who think differently. I have no problem with people who question the vaccine. I want people to know that I support the vaccine. I trust science.”

Fr. Jim Bevacqua, pastor at Holy Name Church in Glendale since 2008, said he felt no “Catholic guilt” for getting vaccinated at the age of 62, although he did feel chills for a day after the second shot.

The priest ended up getting his vaccine from a local convalescent home with excess supply that would have otherwise been discarded.

“The reality is that from what I read, there are a lot of unused vaccines and there are disparities unfortunately in poor and underprivileged communities, which is totally wrong,” he said. “I certainly didn’t feel entitled to get one.”

Much of the work of priests, Father Lawrence Santos pointed out, is done on the “front lines” of sick calls, hearing confessions, and celebrating Masses.

“We are in close contact with far more people than anyone who can work remotely and stay with their family. I am unabashed about having been vaccinated. I feel we’re doing this as an act of charity as well to protect other people.”

Father Santos, who became pastor at St. Genevieve Church in Panorama City during the pandemic lockdown last September, said he is fortunate to live walking distance from a Kaiser Permanente medical center. The 57-year-old and his associates have been vaccinated because of their sacramental work there.

“When we got it, I posted on Facebook and highlighted it at Mass and in our bulletin,” said Father Santos. “People are asking me about it. We are still following protocols with masks and everything, but we have less fear of the virus now.” 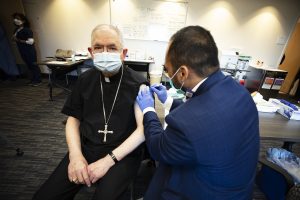 Archbishop José H. Gomez and Auxiliary Bishop Alex Aclan both received their two doses of the Pfizer vaccine at Providence Saint John’s Health Center in Santa Monica, which has taken a proactive role in getting archdiocesan priests vaccinated.

Sister Margarita Rico from the Servants of Mary said she was able to book appointments for 82 priests, many of whom are retired at the Nazareth House assisted-living facility in LA, where she works.

“We are very thankful to Saint John’s personnel for this blessing and gift, and I was proud of the priests who went,” she said. Sister Rico had her own bout with COVID-19 late last year and received a vaccination in mid-February.

“I consider them to be essential workers, interacting with people on home visits for sacraments. It’s essential they all get the vaccine. Some have a lot of underlying health conditions. Maybe the health department put them in a different category for those who only live a spiritual life, but that’s very essential to human beings.”