In these exceptional times of need, there is a beacon of hope in the Greater Los Angeles landscape.

Since the beginning of 2020 — while many other foundations and nonprofits have struggled in the midst of the coronavirus — the Catholic Community Foundation of Los Angeles has granted out $6.5 million in support of education, ministries, and social services.

“During a social and economic crisis, philanthropy is more important than ever,” said Kathleen Anderson, CCF-LA’s president and executive director. “The fact that we have made grants during this crisis, and urged our clients to make grants, is what we are about. Our clients and beneficiary charities are the saints and the stars of what we do.”

Unlike other regional or secular community foundations, CCF-LA provides a platform for charitable individuals united in common Christian values to create and administer donor-advised, endowment, scholarship, and other charitable funds. The foundation also manages the financial assets of other charities and serves as a resource to identify the pressing needs in the Catholic community.

While it is uniquely faith-based, it is also “catholic” with a small c. Clients and beneficiaries do not need to identify as “Catholic” to work with CCF-LA, but all operations, including investing and granting, are carefully monitored to ensure that they are aligned with the values of the Church. 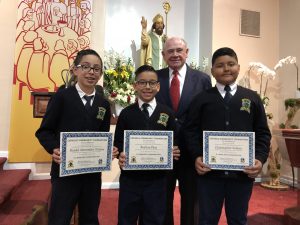 In the past nine weeks, CCF-LA funds have issued grants to over 40 organizations, including Homeboy Industries, Catholic Charities, the Catholic Education Foundation of Los Angeles, the Society of St. Vincent de Paul of Los Angeles, the Union Rescue Mission, St. John’s Health Center, Feeding America Riverside, and many more working on the frontlines to assist those hit hardest by the local and global economic shutdown.

“The Catholic Community Foundation has been a wonderful expression of our Christian mission to love and serve those in need,” said Archbishop José H. Gomez. “Especially now, when there are so many people hurting as a consequence of the coronavirus, it is beautiful to see the foundation responding with such thoughtfulness and generosity.”

Foundation staff, which includes 11 full-time employees, have experienced the same challenges as many other financial- and client-service-based companies when they moved to remote operations on March 16. Staff quickly found additional tools and communication platforms to avoid any disruption in the daily operations, allowing them to process the additional $20 million in assets added to the foundation’s accounts since Jan 1.

“The success of CCF-LA demonstrates the great need we are fulfilling for our clients who want to work with a like-minded entity to manage their charitable giving,” said William Wardlaw, CCF-LA’s chairman of the 13-member board. “From the very beginning, we did not just forge client relationships, we forged partnerships.” 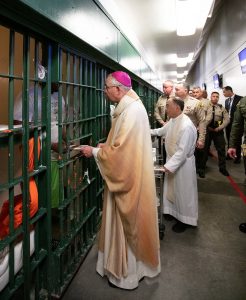 Archbishop Gomez sits on the foundation’s board. One of the 207 funds at CCF-LA sends grants to the Archdiocesan Office of Restorative Justice to assist in prison ministry and other services. (Victor Alemán)

Five years ago, Archbishop Gomez fulfilled his vision of forming a Catholic community foundation to support the most vulnerable in our society in the sprawl that encompasses the Archdiocese of Los Angeles — the Los Angeles, Ventura, and Santa Barbara counties.

He approached Anderson, former executive director of the Catholic Education Foundation, and Wardlaw, chief compliance officer at the private-equity firm Freeman Spogli & Co., to make it happen. With a founding board of leaders in fields of investment management, finance, governance, and nonprofit and corporate operations, they were able to ramp up quickly and efficiently. Operating with full transparency, they adopted a problem-solving approach to managing philanthropy with a core value of “client satisfaction always comes first.”

In March 2014, the Catholic Community Foundation of Los Angeles was incorporated and soon after received its designation as a 501(c)(3) nonprofit. The following year, CCF-LA took in its first client funds.

Operating independently from the archdiocese, CCF-LA has in just five years rapidly grown from 27 funds and $8 million in grants in 2015 to 207 funds and over $178 million in grants by 2020. By any measure, it would be astonishing, so it is no surprise that CCF-LA has become one of the largest Catholic community foundations in the country, with a 2019 year-end balance of over $364 million in assets under management.

CCF-LA recently published its 2019 Annual Statement, featuring the milestones and accomplishments of the foundation over its five-year history. (Courtesy CCF-LA)

The first fund in 2020 at CCF-LA was opened by Adrienne Usher with the help of her father, Steve. A high school sophomore who had created a #GoFundMe “Dollars for Divine” campaign, she raised more than $13,000 for Divine Saviour School last year. She started her “What Is Your Dream?” Fund with CCF-LA to support Catholic elementary-school education. “This is such a rewarding endeavor to be involved in. Adrienne and I are really thankful for the outreach and support of CCF-LA,” said Usher.

The foundation expects to continue a high level of activity through 2020 as donors look for ways to structure their charitable giving and pass on the tradition of philanthropy from one generation to the next.

CCF-LA is now issuing their usual monthly email newsletter every other week in hopes of drawing attention to the urgent needs in our community and encouraging Catholics to respond in prayer, make grants out of existing funds, or start a fund.

Timithie Norman is the director of client development for the Catholic Community Foundation.