Mari couch surfed with her mother for months. Usually, it was with relatives and her mom’s friends. They often wore out their welcome after a couple of weeks.

But somehow during all the instability and turmoil, the teenager stayed, hitting the books to keep up her grades at Compton High School.

“I lived with an aunt for two years, but then she moved away,” the 17-year-old explained to Angelus News recently. “Then we were actually just hopping from house to house like every two weeks. That’s how long people would let us stay. Then we’d have to leave and find another place. It was hard, plus, you know, keep going to school as well.”

After they’d called all kinds of homeless programs and searched for days online with no success, the single mother and daughter wound up staying at Mari’s economics teacher’s home.

It was that teacher who told them about a place nearby called Angel’s Flight. He knew it was some kind of shelter for runaways, at-risk and homeless youth.

By now desperate, they came to Angel’s Flight, a program of Catholic Charities of Los Angeles, and there happened to be an opening that day. The teenager signed up on the spot.

In order to keep attending Compton High School, Mari would have to wake up hours earlier to take two light rail trains to the Willowbrook stop, before either walking to a friend’s house to catch a ride to school or running for 20 minutes to make it before the start of class.

“I know the trains pretty well,” Mari said with a laugh. “And I walk pretty fast.” 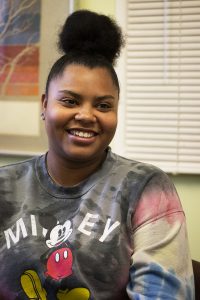 Mari, 17 years old, is a part of Angel’s Flight, a program of Catholic Charities of Los Angeles. (R.W. Dellinger)

Still, there were those days she just wanted to give up on the whole high school thing and stay in bed at Angel’s Flight.

“To be honest, I felt like giving up sometimes on school,” she confided. “I would say, ‘I don’t want to get up.’ And my case manager would come and say, ‘You’ve got to go to school.’ He’d say, ‘You want to finish high school, right?’ ”

Another invaluable resource at Angel’s Flight was the therapist on staff, whom Mari credits with always offering a listening ear and helping her open up.

“We would talk about me being homeless and how I felt about that,” recalled Mari. “How I felt about my mom not living with me now. Big things and little things. So the motivation from both of them, it helped me to keep going. And, like, plus they gave me a place to stay for a very long time.”

A year later, the teenager is still living at Angel’s Flight. She graduated from Compton High School in June and started classes at Los Angeles City College in August. And after getting an associate degree in biology, she plans on going to Cal Poly Pomona university because she loves animals, and her career goal is to become a veterinarian.

“It’s been my dream for as long as I can think of,” she said, smiling now.

It is the job of Patricia Chaidez, executive director of Angel’s Flight, and other staff members to help youths like Mari take some first steps toward their dreams. Each has a case manager who develops a specific plan with goals for every boy and girl.

Most stay, however, only a month or two, or even less before going back to their families or relatives. The center also offers drop-in services to other patrons such as showers, clothing, hygiene supplies, and meals.

“Mari’s special. I just think she’s a really neat kid,” said the former counselor and program manager during a walk through the two-story yellow building on Westlake Avenue.

In the last two years, Chaidez says the shelter has noticed an uptick in children whose parents are homeless, too.

“It’s not just the kid who ran away and became homeless,” she explained. “ We have kids who are staying here, while the family is staying elsewhere. A shelter may not be able to accommodate the whole family.

“So with the growing number of homeless families here in Los Angeles, we are seeing more children like that.”

This year, Catholic Charities of Los Angeles celebrates 100 years of helping families and individuals like Mari during the most difficult trials of life.

While its name has changed — from Associated Catholic Charities under founder Bishop John J. Cantwell in 1919, to being renamed the Bureau of Catholic Charities in 1921 and the Catholic Welfare Bureau in 1926, then finally being incorporated in 1986 as Catholic Charities of Los Angeles, Inc. — the mission has stayed the same: to serve the poor and disenfranchised of Southern California through acts of charity.

And while being the social service arm of the Archdiocese of Los Angeles, the agency remains its own nonprofit public benefit corporation. Catholic Charities offers emergency services as well as the basic necessities of life to the poorest residents of the archdiocese, covering all of Los Angeles, Ventura, and Santa Barbara counties. In short, it gives clients the tools and resources they need to better their troubled lives.

The other basic mission of the agency concerns addressing the chronic social issues that afflict the area, particularly homelessness and immigration. This is done through Catholic Charities’ advocacy work, and especially lately, such help often comes in the form of an immigration lawyer from the organization’s Esperanza Immigrant Rights Project representing an individual or family seeking asylum.

Today, Catholic Charities runs 18 community centers and eight homeless shelters. It also serves the poor with multifaceted social service programs. And it provides a continuum of care for clients as they move from vulnerability to self-sufficiency. 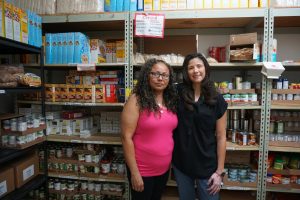 Sandra Yanez (right) and Maria Cabrera, at the Loaves and Fishes food pantry based out of the Guadalupe Center in Canoga Park. (R.W. Dellinger)

The “Loaves and Fishes” food pantry based out of the Guadalupe Center in Canoga Park is one of the focal points of the agency’s outreach in Los Angeles.

On a recent Wednesday morning, the director of Catholic Charities’ San Fernando region showed off the backside of the center’s well-stocked pantry. Three men were loading cardboard boxes marked “large” and “small” with what Sandra Yanez pointed out were staples: beans, rice, and pasta. The men also grabbed from shelves canned meat along with jars of peanut butter and boxes of cereal.

“We’re a little different than other Catholic Charities pantries because we’re primarily serving families, mostly Mexican families, who come from around here and can walk home with bags of food,” she said.

“There are a handful of other pantries on the peripheries of Canoga Park, but a lot of our patrons don’t drive. We’re very family-oriented, and the pantry is huge for a lot of families.

“So it is our most important program. We have all kinds of kids’ programs like after-school tutoring, day care, sports like soccer and volleyball, and a learning center and computer lab with 20 computers. But if kids aren’t nourished, and they’re not getting what food they need at home, it can be devastating. And all those other things will just go by the wayside.”

The pantry, started in 1988, serves 350 families a month, which comes to about 1,500 individuals. It’s open Monday, Wednesday, and Friday for food distribution, while Tuesday and Thursday are “bread” days.

After parents register, which is kept on filed index cards, they can come in once a month. Depending on a family’s size, they get a small or large box of food that’s transferred to handed-out easy-carry paper bags or reusable bags they’ve brought with them. Bread days are open to all.

Yanez said that lately they’ve encountered more families living in cars, and given the recent fears about federal immigration enforcement, people seem more hesitant about coming to the Guadalupe Center.

“We’ve always had a very large police presence here because we’re involved in their kids’ cadet programs,” explained Yanez. “So I’ve had families ask: ‘Are we safe? Are you going to be raided by ICE?’ And we say, ‘No! No!’ But it’s difficult. You can tell people that, but, ultimately, the fear is there.”

In the panty’s front sign-in room, the director ran into a regular customer, Maria Cabrera. The 42-year-old grandmother has been coming to Loaves and Fishes for six years to help feed three sons and a daughter with her baby still living at home together in Canoga Park.

“I need a lot of food, especially on summer vacation,” she said with a chuckle. “This is so much help to me and my family, especially at the end of a month. Sometimes we run out of food. So I need it. And that’s why I come every month.”

R.W. Dellinger is the features editor for Angelus. In a career spanning three decades, Bob has told the story of the Church's work for justice and peace through expert analysis, and narrative and investigative reporting from the peripheries of Los Angeles. In 2018, the Catholic Press Association named him ”Writer of the Year."

How St. Clare of Assisi can help us make the most of today’s strange times