Msgr. Gregory A. Cox became the executive director of Catholic Charities of Los Angeles when the agency was celebrating its 75th anniversary in 1994. Back then it was called the Catholic Welfare Bureau.

This year Catholic Charities is celebrating 100 years serving the poor, the homeless, the elderly, and all of the underserved in the Archdiocese of Los Angeles. Cox sat down with Angelus News to reflect on his own long tenure with Catholic Charities here as well as the agency’s “century of compassion.”

Dellinger: What were some of those early doors?
Cox: Bishop [John J.] Cantwell was the one who started the whole thing. He could just see there were needs outside that parishes couldn’t handle, needs that we as a Church must handle.

So those were the four areas in the very beginning back in 1919 here in the diocese — which was all of Southern California then and more [Diocese of Monterey-Los Angeles] — they were looking to serve. And it started growing and developing up to Santa Barbara and out to other places in the late ’20s.

Charities in those days were just beginning to evolve here as well as in the whole country. Social work was not a profession. The people involved were known as “do-gooders,” which they were. It was the time of the “Settlement House” that started in the East and Midwest. And we had about six here in the ’30s. In Santa Barbara, Santa Maria, East LA, and Watts.

The do-gooders were basically people of means getting together and looking at “How are we going to meet some of the poor’s needs of our community?” It was kind of a novel idea. And it was from those settlement homes that charities were beginning to become more professionalized. You could go to college and get a degree in social work.

Dellinger: So what was happening out here?
Cox: Catholic Charities was beginning to move into more of a social service direction: “How can you serve the poor better while keeping the compassion?” “How do you take the skills and advancements of society to help us in our service in a religious dimension?” Certainly under Cardinal [James] McIntyre that was a big investment.

And Joe Scott, the famous local lawyer, helped start Rancho San Antonio, the Boys Town of the West, working with troubled youth. Rancho San Antonio, I think, was a major step that the archdiocese through Catholic Charities took. “How do you take court-referral kids and give them another opportunity?” It was a great program. 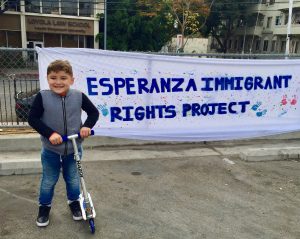 Dellinger: Jumping forward, what has Catholic Charities of Los Angeles addressed more recently?
Cox: Also in the ’50s was Hungary’s revolution against the Communists. And with some 30,000 Hungarians fleeing to the U.S., and many winding up out here, Catholic Charities helped resettle Hungarians who resettled in Los Angeles. That was really the beginning of our refugee resettlement program.

And then later, with the Vietnam War, thousands of refugees were coming to California. And we were fortunate that we had a refugee resettlement program in place, so that after the war, there was great coordination between Catholic Charities and our parishes in resettling thousands of refugees.

We realized that they needed to fit into a community. And parishes were wonderful about doing just that.

Dellinger: Catholic Charities was also dealing with homelessness early on?
Cox: Right. Cardinal [Timothy] Manning, in his walks around St. Vibiana Cathedral downtown, would see more and more homeless on the street, including women. And that’s how Good Shepherd Center came about.

Msgr. [John] Languille was the pastor of Our Lady of Loretto Parish and he converted the convent into the Lanquille Center for homeless women in crisis. And over the years, Sister Julia Mary and then Sister Anne Tran have just expanded that to include a continuum of programs for homeless women and their children.

The point is Catholic Charities is always evolving. You see the need early on and then do something about it. We could also see there’s a certain segment of the population who probably are going to be homeless their whole life. I hate to say that, but it’s a reality. What are we going to do to serve them?

That’s why we have Project Achieve shelter for homeless men and women there in Long Beach and other shelters for basically overnight stays, taking a shower, and getting a meal. And now we’re working with the county of Los Angeles and the city with BRIDGE Housing until apartments get built, and also Housing First. 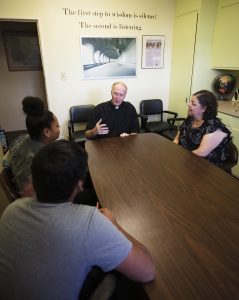 Dellinger: In the near future, what issues do you see Catholic Charities taking on?
Cox: Human trafficking. LA is really the Ellis Island of the United States today. We’re receiving immigrants from all over the world.

When they’re young, they’re very vulnerable. So human traffickers are exploiting them right now. And I see that as growing more and more, unfortunately. So we need to get more involved in helping those women.

Another area is foster care. The age limit has been extended in California to 21, which is good. But once they leave, there’s no support. So, 30% of them statistically soon become homeless when they transition out of the system.

Some of these young people want to continue their education going to local community colleges. But they have no place to stay. And young women coming out of the foster care system often become victims of human trafficking. We have to catch these kids at that crucial transitional time before they become homeless, because the longer they’re homeless, the harder it is to pull them back out.

Dellinger: Anything else to add?
Cox: We will continue to help the homeless, and we feel we’ve got a system that does a good job. But you have to be patient, and you have to realize these are human beings. You can’t just microwave them for two minutes and everything is fine.

Another area that I think is a major issue is gang violence. It’s throughout all of Los Angeles. And it’s all nationalities: Korean gangs, Hispanic gangs, black gangs, Russian gangs. I mean, it’s a problem in Los Angeles that I think is even going to grow. So there’s so much work that needs to be done, because there are unique psycho-social issues with a person in a gang.

The other thing, too, I see is the family unit breaking down in places like Los Angeles. I’d say most of the issues we have with the young and individuals who are homeless is their family has tended to be just awful. So that’s a big underlying issue.

Dellinger: Your logo for the centennial year of Catholic Charities of Los Angeles says you are continuing a “tradition of compassion.” Is it?
Cox: Without a doubt. We are Catholic and we’re charitable. And the title is a reminder of why we do what we do. Yes, we’re social workers. Professional education is important. But our faith reminds us that this is a responsibility we have. And our workers have that compassion and that sense of love.

They’re willing to make a sacrifice for the benefit of others as their life ministry. And our volunteers, and there are many, have that same compassion.

People say to me, “How can you take all that suffering and pain?” And I always say, “What were our Lord’s miracles?”

His miracles were healing. And that’s what our role is. To heal. And I think that’s what makes us different. Social service is good, but when you bring in your faith, it adds a whole other dimension. That’s why we’re here for a hundred years. And we’re not going any place.”