By virtue of its own name, the Cathedral of Our Lady of the Angels is perhaps LA’s most conspicuous testament to the motherhood of the Blessed Virgin Mary. But tucked to the side of the cathedral is a more discrete tribute to divine parenthood, a statue honoring Mary’s partner and help-mate, St. Joseph.

Commissioned as a retirement gift to Emeritus Archbishop Cardinal Roger Mahony, the bronze statue of the saint created by local sculptor Christopher Slatoff has been a fixture at the cathedral since 2011.

The statue depicts the patron of fathers at his workbench placing down his hammer and picking up the Christ Child. In doing so, it strays from most traditional depictions of St. Joseph the Worker. It shows St. Joseph not in the act of working, but in the moment of setting aside his labor to attend to his young son.

Ten years later, the significance of the statue, named “Adoption,” is still fresh for Slatoff.

“There’s the baby Jesus being presented right there, and there’s Joseph putting his hammer down and picking up the body of Christ,” Slatoff said. “There’s almost this St. Michael-like weighing of souls in this — which is better? Of course, you’re going to pick up the body of Christ.”

More than just a decision between stopping work to be with family, Slatoff said “Adoption” is an attempt to show the beauty of the bond between adopted father and adopted son. It’s a bond Slatoff can relate to: four of his five children are adopted.

His oldest, Michael, was nine at the time of his adoption. His older age meant that adoption was more than just a legal proceeding, Slatoff explained, but rather a choice between the two: “I will be your son, you will be my father. He had to be OK with that.”

From that moment on, Slatoff’s relationship with St. Joseph changed, too: No longer was he just the adoptive father of Jesus, but an exemplar for his own fatherhood.

“There’s no other saint that you could point to that more substantially dealt with the idea of somebody raising a child who is not genetically theirs,” Slatoff said.

“Undoubtedly, Joseph reacted to it better than I. But that’s why we have saints, isn’t it? Isn’t it so we can say, ‘This is my experience. I’ve got somebody who did it better that I can relate to.’ ” 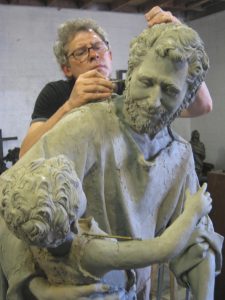 In his bronze work he crafted representations of communion, from the hand wrapping around the Christ Child, to the intricately sculpted knot of St. Joseph’s apron and the binding around his hammer.

Even St. Joseph’s workbench speaks to the viewer about the family bond, a symbol of how Christ, through his life, death and resurrection, has extended the bonds of his family to include all humanity.

“Anybody who sits on that bench is part of the Holy Family,” Slatoff said. “You want a family picture with God? You sit on the bench!”

Sitting and taking a “family picture with God” is no mere hypothetical. According to Msgr. Kevin Kostelnik, the cathedral’s founding pastor, the piece was intended to have an interactive dimension.

“That was the concept that we carried through from Father Richard Vosko,” explained Msgr. Kostelnik, referencing a priest from the Diocese of Albany who once served as art consultant for the cathedral. “It was his idea that the art should not just be something that should be placed eight feet up on the wall and lifted up high so people can gaze at it, but that it needed to be interactive.”

Msgr. Kostelnik likes to note that even the statue’s location within the expansive cathedral serves a practical function for parents: The northern ambulatory where the statue is placed is often where parents leave their strollers or bring fussy children to calm down during Mass.

“The ambulatory became the timeout space,” said Msgr. Kostelnik, who today is pastor of, incidentally, St. Joseph Church in Long Beach. “And in that timeout space, children became very familiar with that statue. They loved to climb up on the bench, they loved to hug the child Jesus.”

In other words, a timeout space turned into a devotional space.

Slatoff admitted that the opportunity to make a religious sculpture like “Adoption” has spoiled so-called “regular” art for him.

“And if the work is good,” he added, “the sculpture continues to meet them at that level that they are at that time.”

Experience would argue that the work of “Adoption” is good. From the first moment the statue was named, it bore fruit in the lives of adopted children and parents alike. Slatoff recalled that when he first told his oldest son the statue’s name, the boy was brought to tears.

For others, like one student who Slatoff taught in his role as artist-in-residence at Fuller Theological Seminary, the statue works more quietly.

The student wanted to talk about her adoption with her parents, who were hesitant to broach the topic. So instead of trying to initiate a difficult conversation, she invited her parents to see a certain statue at the cathedral.

“It was an opportunity to not have to use the words,” Slatoff explained. “That’s the great thing about the artwork, it just pushes and prods you without having to go through the very crude methods of using words to speak.”

Like a parent who laments how fast their young children have grown up, the fact that “Adoption” is already 10 years old seems shocking to Slatoff. But he sees the fact that the anniversary coincides with the newly proclaimed “Year of St. Joseph” as an invitation to revisit his relationship with the popular patron.

“The idea that Joseph is the patron saint of a good death, as I’m hitting my late 60s, was like ‘Oh, oh my!’” Slatoff said. “And I’m thinking about how my children are going to have to deal with a senile, old, hardheaded sculptor.”

Adoption, Cathedral of Our Lady of the Angels, St. Joseph, Year of St. Joseph