Padre Serra Church in Camarillo welcomed a new pastoral associate at a special ceremony Oct. 2, the first in the Archdiocese of Los Angeles since 2020.

The commissioning ceremony for Teresa Runyon took place during the 11 a.m. Sunday Mass celebrated by Auxiliary Bishop Marc Trudeau in the presence of a packed crowd of parishioners.

“I am privileged to be trusted with your stories, your joys, and your sorrows, and to journey together, encountering Jesus and doing our best to be his disciples,” Runyon said at the Mass.

She also called the moment “an affirmation for the call to the laity, to all of us, by a baptismal call, to love God, know God, and serve God.”

Katie Tassinari, associate director of the archdiocesan Office of New Evangelization and Parish Life, opened the ceremony by reminding Bishop Trudeau and the congregation that “the pastoral activity of the Church requires the cooperation of a great many people.” 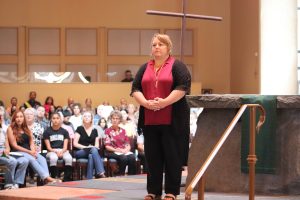 Since 2013, Runyon has served as Padre Serra’s faith life minister, and before that, she spent nearly three decades in parishes throughout the archdiocese, as a volunteer, a catechist, and administrator.

When she learned about the role of a pastoral associate after the archdiocese’s first commissioning in 2003, Runyon said, “I felt the stirrings of a call.” From there, “God put just the right people, the right cheerleaders, on my path.”

One of them was Padre Serra pastor Father Patrick Mullen. She said her longtime friend and mentor “nurtured the seed” of her calling every step of the way, encouraging Runyon to undergo the process with the Office of New Evangelization, and eventually, go back to school at St. John’s Seminary, where she earned her Master of Arts in pastoral ministry last May.

“It is such a pleasure for me to be on this journey with Jesus, and [to have] Teresa as a companion in the work of the Lord,” Father Mullen said at the Mass. 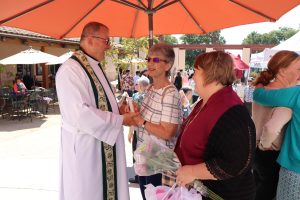 Since 1999, the role of pastoral associate in the Archdiocese of Los Angeles has been defined as a generalist in ministry who collaborates with the pastor “to serve the needs of the parish.” The other form of lay ecclesial ministry in the archdiocese, parish life director, is a layperson who serves as the spiritual and administrative leader of a parish where there is not a priest pastor.

At Padre Serra, Runyon will continue working within the parish, now more closely involved in the day-to-day operations and ministering to the parish’s congregation. “I’ve really been doing the work for many years now,” Runyon said. But “today is a recognition of that work, and an affirmation of my vocation.”

“Since Vatican II, [the popes] have been challenging the Church to refocus on the mission Jesus entrusted to his Church — to evangelize and make disciples of all people,” Tassinari said. “This mission is going to take … all the baptized to fulfill and bear fruit for the kingdom.”