At every point in his life, Brother Kevin Dismas Moshier said he felt God calling him to go somewhere else, to do more.

That call has brought him all across the country, from the East Coast to the West, to finally settle in Los Angeles working with the poor, the homeless, and the suffering in every way he can as a member of the Friars of the Sick Poor of Los Angeles.

On Feb. 9, 2020, Brother Kevin Dismas received the Brotherhood Award at the Annual Religious Brothers Mass in recognition of this work. The award, presented by Archbishop José H. Gomez, is given to one brother each year, selected by the Religious Brothers Council.

“I like to operate below radar,” Brother Kevin Dismas said. “But I’m forever grateful.”

Part of the vows he and the other Friars of the Sick Poor take include a vow of self-sufficiency, meaning they pass donations on to the poor and live off their own wages. Brother Kevin Dismas works as a PTSD and suicide counselor for Marines at Camp Pendleton in San Diego. His program is eight weeks, and if a participant survives it, he gets to remain in the Marine Corps. “Over the past five years, 105 guys have gone through this programming and come out to stay,” he told Angelus.

He also works as an outreach coordinator for a local program that keeps 400 to 500 homeless people fed each day. They make 40-pound boxes of food and distribute nearly 3,000 of these every month to families in need.

When he learned that he was receiving the Brotherhood Award, Brother Kevin Dismas said one of the first things he did was to call Father Tom Betz, provincial for the Capuchins at St. Augustine Province in Pittsburgh, Pennsylvania, and thank him. After the death of his wife 13 years ago, that's where he started his path of religious life. “They trained me to be a good friar,” he said. “Although I didn’t stay with them, this gift from the archbishop started with them.”

His early work as an outreach coordinator at St. John's Hospice, a homeless shelter for men in Philadelphia, was the beginning of his falling in love with poverty, he said. He knew, no matter where God called him next, that was the work he wanted to do.

His journey led him to Los Angeles, where he met Brother Richard Hirbe and discovered the Friars of the Sick Poor of Los Angeles, founded in 2001 by Brother Richard and Brother Cesar Galan. The friars have taken Our Lady of Guadalupe as their patroness, and as such, they keep their first names, and choose a second name as their religious name. “We don’t mess with what mothers give us,” Brother Kevin Dismas said. 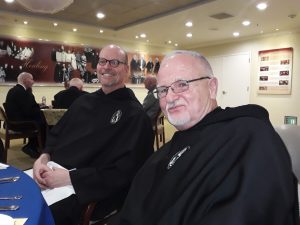 Along with his work in LA, Brother Kevin Dismas brings his ministry back to the East Coast this summer at the International Scout Jamboree for the Boy Scouts of America. He arranged for priests to say Mass every morning at 6:30. People said he wouldn’t get any participants, but the second morning, a large number of young people showed up.

“You can’t tell me that in their hearts, they don’t know that there’s a God,” Brother Kevin Dismas said. “The world is telling us that it’s anti-God, and it’s not true.”

Coordinating the Masses at the Jamboree could even require an interfaith effort. At one point, when they ran out of wine to use, Brother Kevin Dismas called in a favor, and a few hours later a Jewish rabbi arrived with wine and Communion wafers.

As retired military, Brother Kevin Dismas knows he has a unique perspective that helps the struggling Marines he works with. The men he counsels always start by telling him, “You don’t understand.” But he’s quick to correct them. He has three grown children, seven grandchildren, and one great-grandchild. “I know the whole story, I know what it looks like,” he tells them.

“We do what we can to help them find a path,” Brother Kevin Dismas said of those he ministers to. “We’re called to be Christ for every soul that we meet.”

In a way, the Brotherhood Award is just confirmation that he is living the life he has always wanted. “Every day of my life, I have been exceedingly blessed,” he said. “I get up in the mornings and I am joyful. My greatest joy is being a friar and bringing hope to the poor.”

To learn more about the Friars of the Sick Poor of Los Angeles, visit http://www.friarsofthesickpoor.org/.

Longing for a lost Eden