Since April, the Long Beach Convention Center has housed migrant children with nowhere else to go, while authorities searched for adult family members and sponsors in the country. Nearly 1,600 unaccompanied minors from Guatemala, Honduras, and El Salvador, most of them fleeing violence and poverty, have spent the last several months living there.

The Archdiocese of Los Angeles successfully petitioned to begin holding weekend Masses at the shelter in May. But now that the shelter is closing, the Masses are also coming to an end.

The last Mass, held on July 18, was a celebration of the next step for these children, but for the religious service volunteers, it was a “bittersweet” end to a “meaningful and intense ministry,” as they called it. 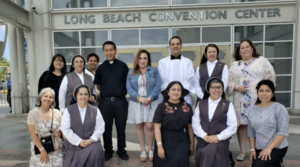 The religious service volunteers gathered after the last Mass July 18 at the Long Beach Convention Center.

“At first, I felt apprehensive about so many children being present at Mass without their parents,” said Cynthia Marie Powell, who served as an extraordinary minister of holy Communion each week. “However, when I looked into each child’s eyes, I felt Our Lord’s presence deeply, and I was very conscious of their reverence for the Blessed Sacrament.”

A descendant of Japanese, Mexican, and Welsh immigrants, Powell said she was drawn to work with the migrant children at the shelter in part to help them start over in America with their families and sponsors.

Powell and the volunteers at the shelter had to put in significant work of their own to work at the shelter, including eight hours of on-site training, fingerprinting, and regular COVID-19 screening tests.

The emotional and spiritual rewards for this time, though, were “immeasurable,” Powell said.

Volunteer priests who celebrated Sunday Masses often found the children in need of other sacraments. After Masses, several children would line up for confession and prayer with the priests.

“I met a girl after Mass who had been in the shelter [for] a few weeks,” one of the volunteer priests, Father Budi Wardhana, pastor of St. Lucy Church in Long Beach, recalled. “I thought she wanted [the] sacrament of reconciliation, but she said, ‘No, Father, I just really miss my parents.”

Father Wardhana, who came to America from Indonesia seeking political asylum in 1999, said, “I prayed for her. I thank God [for] the opportunity to bring the joy of God to these children who are suffering!”

Father Wardhana recruited his friend, Rafael Alvarez, a seminarian at the Queen of Angels Center for Priestly Formation. Alvarez and his family migrated to the U.S. from Mexico, which he said gives him “great love in a special way for our refugee brothers and sisters.”

“It was a blessing for me to be able to be part of this journey,” he said. “Praying with [the children], I realized that many times all they needed was someone to hear them. Even though we are not family, they knew that we cared for them.” 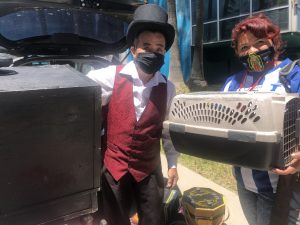 The community rallied to help provide the children at the shelter with necessities and comforts during their stay. The Society of St. Vincent de Paul hosted a toiletry drive, collecting nearly 200 packets with toothpaste, toothbrushes, shampoo, feminine hygiene items, and rosaries. They also arranged a Día de Los Niños (“Children’s Day”) celebration at the shelter, and brought in toys and a magician.

Although their work at the shelter is over, Powell believes her journey with migrant children is far from over. As an attorney, she is working pro bono with the Esperanza Immigrant Rights Project as an advocate for immigrant children who will have to navigate court proceedings once they leave federal emergency shelters.

“I will never forget the profound experience of being together with the migrant children to receive Holy Communion,” she said. “I pray that the Central American migrant children I met at the Center can make a life here with their families or sponsors.”