At City of Saints, teens find hope and answers for healing a broken world

In a room aglow with candles and images of the saints, Michael Weaver kneeled before a monstrance and gazed upon it with awe. It was a moment that the 16-year-old sparked a profound realization about his faith.

“I found that love is truly the message of Catholicism,” said Weaver, a parishioner of St. Joseph Church in Long Beach. “The same God that died for our sins and rose again humbled himself into a small monstrance standing in front of a thousand sinners simply because of his love.”

It was one of many sacred moments experienced at the fifth annual City of Saints Teen Conference held Aug. 2-4, where more than 1,000 young people from around the Archdiocese of Los Angeles converged on the campus of UCLA to participate in the sacraments of the Eucharist and reconciliation, gather together in praise and worship, and hear from an all-star lineup of Catholic speakers.

The event, hosted by the Archdiocese of Los Angeles’ Office of Religious Education, was first conceived by Archbishop José H. Gomez as a moment to help local teenage Catholics deepen their relationship with Christ. The idea of living as saints was one of the themes of the archbishop’s homily for the Saturday night vigil Mass.

“My dear young friends, he is calling each of you to be saints, to love with all your heart and help your family and friends to know God and his mercy,” Archbishop Gomez told the youths gathered inside UCLA’s Royce Hall.

“And he is calling you to make this world a ‘city of saints,’ to work with all your strength and to use all your gifts to serve our brothers and sisters, especially the poor.”

The day before, the archbishop also celebrated the conference’s opening Mass before leading a winding eucharistic procession around the UCLA campus concluding in eucharistic adoration. His continued presence was enjoyed in both informal and formal activities throughout the weekend.

Standing on the main stage Friday night, Archbishop Gomez was greeted with shouts of “I love you!” from the audience.

“As Pope Francis has said, you are not the future, you are the present of the Church,” Archbishop Gomez told them, drawing boisterous “Amens” and cheers.

“We're not just going to sit around,” said Gasper emphatically. “We’re volunteering at our Thanksgiving dinners for the homeless, we’re peer leaders in our confirmation groups. We’re here now.”

But, she admitted, that doesn’t mean teens have all the answers.

“You're growing up and you're still trying to figure out ‘Do I believe all of it? Am I a bad Catholic if I don't believe all of it?’ The speakers here at City of Saints help us answer some of those difficult questions.”

Chris Padgett, one of the keynote speakers, tries to assist others by using both humor and hope. The husband and father of nine has spent the last decade lecturing across the country with his Gospel-centered message. Padgett said he connects with teens because painful memories of his own childhood are still fresh.

“When I’m speaking to kids, I’m oftentimes speaking to that young me that’s potentially in the audience,” said Padgett. “I just want them to know God sees them, cares about them and that they haven't gone too far.”

Keynote speakers Katie Prejean McGrady, Brian Greenfield, and Doug Tooke also took to the stage to impart words of encouragement. It was the latter that gave 16-year-old Sophia Lopez a lot to chew on. 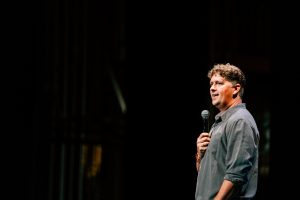 While Tooke had the teens talking, Ike Ndolo had them rocking.

“We’re fixin’ to get rowdy!” shouted the Christian singer as he launched into one of his performances over the weekend. Ndolo played in a rock arena-like atmosphere complete with flashing lights and a dance cam. (In a “saintly” touch, the youths donned illuminated halos.)

However, the upbeat mood of the conference was interrupted Saturday amid news of a mass shooting inside a Walmart in El Paso, Texas. Archbishop Gomez dedicated Saturday night’s Mass to those impacted by the recent violence. He then urged everyone to pray for the victims and society at large.

“I think we should also pray especially for peace,” said Archbishop Gomez. “Peace in the world, peace in our country, that people may understand that God wants to give us the gift of peace and that we are open to that special grace.”

Just hours later, there was news of more carnage in another gun massacre in Dayton, Ohio.

“Our generation can hopefully expand our Christianity to other people. Hopefully this expansion could resolve violence on the streets, that we could go to God instead of resorting to violence,” said Plancarte, who attends All Souls Church in Alhambra.

Plancarte later spent time in the Sacred Space, an area for quiet reflection and reading. Prayer walls gave teens the opportunity to write down their hopes and fears. Priests from around the archdiocese were on hand for confession. Plancarte said he confessed to be closer to God.

“I felt more like God’s son, since I think of him as wanting us to be loving and joyful toward ourselves and others.” 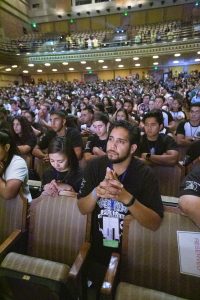 Plancarte wasn’t the only one wanting to spread a positive vibe. Members of a Hacienda Heights youth group came wearing matching t-shirts and “Free hugs” signs.

“We feel that our youth right now need to support each other — no judgment,” explained 17-year-old Alexis Plata of St. John Vianney Church. “Through hugging each other we feel that love and support.” Because sometimes, the teen acknowledged, it’s hard to be a Catholic kid.

Not to this crowd, which included some who are considering religious vocations.

“I think I would like to be a youth minister or maybe enter the sisterhood,” said 16-year-old Norah Kelley, who attends St. Euphrasia Church in Granada Hills. “I try to be open to whatever the Lord is calling me for.”

Of course, not all were thinking about religious life. Many came to the conference with the concerns of daily life. Sixteen-year-old Jaylene Andrade wants more harmony at home.

“I feel like I’m going to take home a lot of love for my family,” said the parishioner of St. Elizabeth Ann Seton Church in Rowland Heights. “My brother and I are arguing, so I feel like I'm going to be able to talk to him now.”

This kind of growth is proof that God is real, said Father Mike Perucho, associate director of vocations for the archdiocese. It shows that Jesus is working through these young people.

“In many ways they [teens] become that witness to all of us who are struggling or finding it hard to believe,” explained Perucho. “If we can journey with them and hear their stories especially after this weekend in many ways, we will be truly moved.”

Perucho had the honor of placing the last picture inside the City of Saints mosaic. All weekend, teens were invited to post their photos on Instagram and Twitter. Those pictures were then printed and turned into a colorful image of Our Lady of Guadalupe. Faith-related questions and the teen’s responses were online as well.

Also new this year was a surprise thank you to the nearly 60 participating parishes in the form of those saint icons in the Sacred Space, which were handed out at the closing ceremony.

“They were full of the Holy Spirit. They were so pumped up,” said conference coordinator Melinda Evangelista of the attendees she saw leave the gathering. “I’m overjoyed so many young people from so many different parishes were happy they attended City of Saints.”

Fifteen-year-old Sandra Lopez was of them.

“It’s not just building my faith but my character, who I am,” said Lopez, who is a parishioner at St. Anthony Church in San Gabriel. “I can respect myself more.”

“I loved it, loved the worship. Definitely will come back.”