At 99, LA’s oldest deacon is still finding ways to serve

Though he has a century’s worth of memories to choose from, one that will always get a chuckle out of 99-year-old Emile Adams Jr. starts with him receiving a rather frantic phone call from his daughter, Lillian.

“The power had gone out in my house,” she said. “I had six children, three boys in the bath, a baby down in the crib, two girls running around and [husband] Frank was at work. I couldn’t figure out the fuse box, so I called my dad and he was over in minutes.

“The moment he walks in the house, he puts his arms over his head and says, ‘Let there be light!’ And the lights went on! We all just stared at him for a moment and then my daughter Robyn said to her sister Renee, ‘See Renee, I told you Papa was God.’ ” (We assume Renee nodded knowingly.)

While one can forgive a granddaughter’s pride, the truth is that people seem to recognize something different about Adams. Just ask parishioners at St. Bernadette Church in Baldwin Hills, where Adams has attended since 1972 and began his ministry as a deacon in 1979. 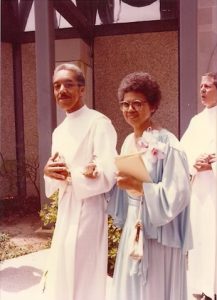 Emile Adams and his late wife, Anona, at his diaconate ordination in 1979.

“Emile is one of those people you meet that simply embodies goodness,” said Deacon Jim Carper, the parish life director at St. Bernadette.

The call to the diaconate didn't come until Adams was already in his 50s.

“There was a deacon position open and the pastor at St. Bernadette recommended me for it,” Adams said. “He told me I was the first person who came to mind.”

That was more than 40 years ago. He’s 99 now, and reputed to be the oldest active deacon in the country — not that the title is anything he really cares about. What is important to Adams is that he can be counted on by his parish community.

It’s who he is — not as a deacon, but as a man — and the reason the “Let there be light!” story is not only amusing, but instructive. First, for the record, Adams said he was only kidding when he commanded the lights and was “as shocked as everyone else when they came on,” attributing matters to a bizarre coincidence.

What is not coincidental is that he showed up to help, and did it quickly. Adams believes it is through acts of service that he best shows his, and Christ’s, love. Reading that, you may assume that Adams lives his life by the passage in James that encourages us to “be doers of the word, and not hearers only.” But those who know Adams well know there is another phrase that guides him.

“His motto is, ‘If someone asks me to do it, then it must need doing,’ ” Carper said.

The “doing” can take the form of serving Mass to making sandwiches for the homeless five days a week, from celebrating funerals and weddings, to heading the parish’s bereavement ministry.

Lillian likes to tell the story of how her dad was asked to volunteer at the Archdiocese of Los Angeles’ Metropolitan Tribunal for a few weeks. He ended up volunteering there three days a week for the next 28 years, helping handle “lack of form” cases.

“I always want to be there to help out,” Adams said. 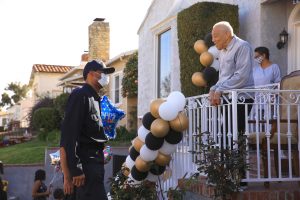 “Even though he was hurting because of just having lost his wife, he wanted to be there because he knew his friend’s wife would be hurting,” Lillian said.

Emile and Anona started St. Bernadette’s Christian Service and Bereavement programs together. When she died, Lillian stepped in to minister to dying patients and their families. It was important to Adams that “no one dies alone,” but that has been made impossible in many cases due to regulations concerning the COVID-19 pandemic.

“It changed things, not being able to have a [funeral] service and people having to go directly to the cemetery,” Emile said. “Yes, it’s been very hard on people, they’ve told me they’d like to have the service, to have closure. It’s made it very difficult.”

So difficult that at one point, Lillian had to tell her father that she would need a break. 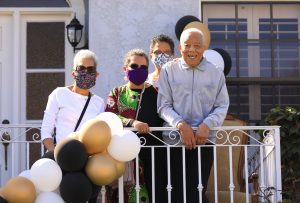 Adams and his daughters at his birthday celebration. (David Amador Rivera)

And they have continued to be there for people. Until COVID-19 closed the doors of his church a year ago, Adams was still assisting at Mass every Sunday. Since then, he’s been leading rosary sessions and Stations of the Cross (during Lent) for parishioners via Zoom.

Adams intends on continuing to “be there” for quite some time. Ask him for the secret to his longevity and he says he really doesn’t do anything special.

Of course, we probably have a lot more to learn from him. As Carper put it, “There is an aura about that man. A building could be falling down and he would remain calm.”

And then he’d likely volunteer to pick up the pieces.