Preaching at LA’s 39th annual “Red Mass,” the pope’s ambassador to the United States called on members of the legal community to defend the voiceless of society even in the face of political pressure or the threat of being “cancelled.”

“It is not always easy to do the right thing, to stand up for the dignity of the person, the needy, the poor, the voiceless members of our society,” said Archbishop Christophe Pierre, Apostolic Nuncio to the U.S., in his homily at the Oct. 20 liturgy at the Cathedral of Our Lady of the Angels.

“It is not easy to take a stand,” he continued, “when there is so much political pressure upon you and when instead of tolerating differences and searching for solutions through dialogue, the looming threat of being cancelled strikes fear.”

“In those moments,” he added, “we must ask the Spirit of God for strength, mindful of St. Paul’s words, ‘I can do all things through Him who strengthens me.’”

Organized by the local chapter of the St. Thomas More Society, the Red Mass is an ecumenical, civic celebration that honors judges, lawyers, legislators, and legal professionals typically celebrated around the start of the legal year in many Catholic dioceses. The Wednesday night liturgy was presided by Los Angeles Archbishop José H. Gomez.

Coming a year after the 2020 Red Mass, which was limited to virtual participation due to the COVID-19 pandemic, several prominent civic figures attended this year’s liturgy. Among those who read prayer petitions during the Mass were Acting U.S. Attorney Tracy Wilkison; Pete Peterson, dean of the Pepperdine School of Public Policy; and the LAPD’s highest ranking female officer, Assistant Chief Office of Operations Beatrice Girmala.

In following with tradition, several representatives of other faiths including Islam, the Church of Latter-Day Saints, and various Protestant denominations were introduced at the Mass by longtime LA interreligious dialogue leader and Greek Catholic priest Rt. Rev. Alexei Smith. The Mass’ ceremonial honor guard was led by members of the Knights of Saint Peter Claver and the Knights of Columbus.

Vince Farhat, chair of the St. Thomas More Society of Los Angeles, said that the ecumenical aspect of the Red Mass is an invitation for non-Catholics to reflect on the legacy of the 16th century saint, who was beheaded by the English crown for choosing to defend his Christian faith over loyalty to the king.

“We believe that Saint Thomas More is a role model for attorneys of all different faiths,” Farhat told Angelus. “Because all are welcome at this Mass, we are very intentional about inviting people to participate in the Mass who are not Catholic, so they can discern and consider what [More’s] example and life means for them, and to also be welcome in our church.”

In the words of closing speaker LA Superior Court Judge Stephen M. Moloney, the Mass was an opportunity to gather “as judges, lawyers, political, government and religious leaders recognizing that the spiritual is fundamentally important as we live out our daily lives.” 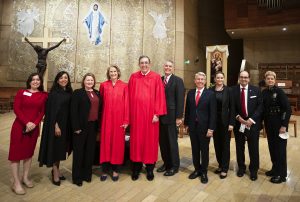 In his remarks, Moloney also recalled how the words of his seventh-grade Catholic school teacher – ironically named Sister Thomas More – guided him through his legal career.

“She told me that I could achieve great things if I was willing to put in the hard work,” said Moloney, who once studied for the priesthood at St. John’s Seminary in Camarillo before studying law at the Jesuit-run University of Santa Clara. “She was right.”

Moloney said the nun often comes to mind at the unavoidable sight of the homeless tents visible around the downtown courthouse where he works.

“I know Sister would remind me that they are entitled to justice just like all who appear before the court,” he said.

In his homily, Archbishop Pierre listed some of the ways that the seven gifts of the Holy Spirit could help guide civic and legal professionals in their work. The supernatural gift of understanding, the French prelate suggested, was especially important in a world “filled with the superficial and the ephemeral, lived in sound bites and tweets” and driven by ideologies.

“God calls you, the members of our judiciary and legal systems, to be persons of substance and integrity, willing to engage in public discourse and debate, open to being changed by an encounter with the truth,” said Archbishop Pierre.