Thousands of Catholics from Southern California and across the country joined Archbishop José H. Gomez in a virtual celebration of the annual Day in Recognition of All Immigrants on Sunday, September 20.

At two Masses, in English and Spanish, livestreamed from the Cathedral of Our Lady of the Angels in downtown LA, Archbishop Gomez reminded the faithful that “we belong to God. He gives us life so that we can serve Christ, so that we can labor and bear fruit in his vineyard, which is the Kingdom that he has planted and is growing in the world.

“God is One and the human race that he created is one! But he creates us as “many” — many races, many nationalities, many languages, and ethnic cultures,” he said during his homily. 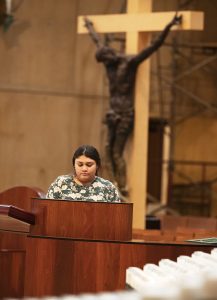 "Kaithlyn," a high school student and unaccompanied minor from Nicaragua, gives her experience at the 2020 Mass for All Immigrants. (Victor Alemán)

At the end of Mass, "Kaithlyn", a Catholic high school student and unaccompanied minor from Nicaragua, shared the story of how she fled her birth country. She came to the U.S. at the age of 13, fleeing from violent threats to her family, and was reunited with her mother in Los Angeles.

“I believe that if you have God in your heart then you will be nice to people and people will be nice to you. I would always pray when I was at the immigration process center with two other girls. We would pray together. We prayed that people would treat us right and that we would stay safe,” said Kaithlyn. “I’m very grateful that this country has given my family a place to feel safe and I will always do my best to be an example to others.”

The two Masses celebrated Sunday, and an Archdiocesan-wide virtual novena lead up to the World Day of Migrants and Refugees, designated by Pope Francis on September 27. Archbishop Gomez has called on LA Catholics to join the nine days of prayer and reflection at https://lacatholics.org/immigration-novena/. He has also invited the faithful to show their support by sharing immigration stories and prayers on social media using the hashtag #PrayForImmigrants. 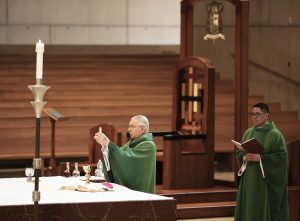 Archbishop José H. Gomez during the Consecration at Mass for All Immigrants Sept. 20, 2020 at the Cathedral of Our Lady of the Angels. The Mass was closed to the public but livestreamed due to COVID-19 restrictions in L.A. County. (Victor Alemán)

“We are “many” because God delights in all this variety and diversity, he loves all these colors and cultures of peoples,” said Archbishop Gomez. “No one, not any one of us, is the same as anyone else. That’s because God loves each of us as a totally unique creation. And yet, for all this diversity that we can see in God’s vineyard, we are still one. One people, one family. In this moment, I believe God is calling our immigrant Church to be a light to our immigrant nation.”

Traditionally, the Day in Recognition of All Immigrants Mass is a culmination of a three-day, 60-mile walking pilgrimage led by Don Antonio, from Orange County to the Cathedral, as a symbol of solidarity for all those impacted by the broken immigration system. Due to the pandemic, Don Antonio walked alone this year, and was welcomed to the Cathedral by Archbishop Gomez on Sunday morning.