Earlier this year, Rosie Shawver accepted an invitation to cross the U.S.-Mexico border to help migrants awaiting asylum hearings. The LA-based executive director of the Catholic Association for Latino Leadership (CALL) made the trip with her daughter, bringing clothes and toiletries to Mexicali, Baja California.

For Shawver, the experience brought to mind that, “on some level, every single one of us is a migrant.”

Experiences like Shawver’s were celebrated at the annual Mass in Recognition of All Immigrants celebrated by Los Angeles Archbishop José H. Gomez at the Cathedral of Our Lady of the Angels on Sunday, Sept. 18, where more than 50 Southern California residents were recognized for their service to immigrant communities.

The bilingual liturgy opened this year’s National Migration Week (Sept. 19-25), which concludes with the World Day of Migrants and Refugees.

In a special way, the day’s festivities were a celebration of the work coordinated by the SoCal Immigration Task Force, a coalition of volunteers and ministries in the Archdiocese of Los Angeles, Dioceses of Orange, San Diego and San Bernardino.

Over the past year, the task force and its partners have donated clothing, translated documents, and sponsored the cross-border trip that included Shawver and her daughter.

“I use the word ‘serve,’ but I think that it’s more of journeying alongside,” Shawver said. “If people want their lives to also be transformed, I think that is what service is about. It’s not just about a handout but about your heart changing.” 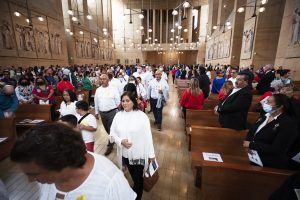 The Sept. 18 Mass drew volunteers and ministries serving immigrants from the Archdiocese of Los Angeles, as well as the Dioceses of Orange, San Diego and San Bernardino. (Victor Alemán)

As in past years, relics of St. Junipero Serra, St. Frances Xavier Cabrini and St. Toribio Romo were placed by the altar and made available for public veneration afterwards.

Sahar Masoom, a local Afghan refugee invited to share her testimony as both an immigrant and an immigration lawyer, was unable to attend due to medical treatment. Eighth grader Mia Cuevas from Holy Angels School in Arcadia, read Masoom’s testimony on her behalf.

Masoom’s experience detailed how the 1994 rise of the Taliban resulted in the loss of education, family employment, and even the brief abduction of her father. Her family fled to Pakistan, where they received physical safety at the expense of social stigma and abuse as refugees.

“Because of these harsh words, my parents would never leave the house,” Masoom wrote. “They hid first from the Taliban, and now they hid from the people of Pakistan. We were seen as trash to the world.”

After a year, they returned to Afghanistan for two years before the fall of the Taliban. Afterwards, Masoom was free to pursue her dreams of becoming a lawyer with the ultimate goal of being a member of her home country’s parliament.

She received her degree from Chapman University in Fullerton, returning to Afghanistan to raise her family. Her return home was short-lived, as the Taliban’s return to power in 2021 forced her to return to the United States. 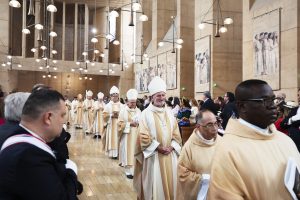 Auxiliary Bishop David G. O'Connell (center) processes into the Cathedral of Our Lady of the Angels with other bishops and priests from around Southern California. (Victor Alemán)

Masoom said she still hopes to represent her father in Afghanistan’s parliament. But for now, she wrote, “I have become an immigration lawyer and help people who don’t speak the language and need help with visas.”

This year’s Mass came as large numbers of refugees – many of them fleeing strife in Haiti, Venezuela, and Central America – continue to arrive at the southern border seeking a better life in the U.S.

Archbishop Gomez said that Masoom’s testimony was an important reminder not to give up hope on achieving immigration reform in the U.S.

“I think we need to be more active, and I hope that in these coming years that we can help our government to finally get that solid immigration reform,” he said after hearing the testimony.

In his homily, Archbishop Gomez called on attendees to “help our neighbors and leaders to feel compassion for the common humanity and destiny that we share with one another, including our immigrant brothers and sisters.”

In addition to praying harder for government officials and lawmakers, “we also need to be faithful in the little things of charity, of love,” the archbishop said. “It means responding generously to people who need your help, or even just your attention, or some of your time.”

To find opportunities for service, Shawver suggested Catholics reach out to their diocese or local Catholic Charities office.

“Those would be the two places I would start,” she said. “Just try to find places to learn how to serve.”

Archbishop Gomez, Bishop Alberto Rojas, Cathedral of Our Lady of the Angels, Immigration