Amid pandemic, LA’s annual Mass for the sick finds a deeper meaning

As COVID-19 kept all but a handful of people from gathering in the vast Our Lady of the Angels Cathedral on February 13, a Catholic order with a thousand-year history of care for the sick co-hosted the annual Day of the Sick Mass.

In a typical year, the Mass draws 1,800 people. Blessed water from the healing Shrine of Our Lady of Lourdes would be distributed by members of the Sovereign Order of Malta. They would have brought it back from their annual pilgrimage of the sick to the shrine in France.

While this year’s event had none of that, the annual liturgy took on a special significance this year, in the midst of a crippling pandemic.

Archbishop José H. Gomez, who presided the Mass, offered a special blessing for the sick to experience the healing care of Jesus. Prayers were offered for their loved ones, healthcare workers and those who have died.

“We have to trust in God that Jesus is always with us, and that we have the intercession of Mary, our Blessed Mother,” Archbishop Gomez said. “So, let’s keep praying for each other.”

Auxiliary Bishop David O’Connell preached on Jesus’ healing of a leper, stressing the lepers’ isolation. They were “cut off from family, cut off from society, cut off from community, even from the Temple,” he said. “Almost feeling cut off from God himself.”

Jesus’ first response to the leper, the bishop noted, was to touch him — a forbidden act.

“He was even willing to take the risk of getting the disease himself in order to show this man . . . the depth of his love and compassion,” Bishop O’Connell said.

“For all of those who feel isolated and cut off from loved ones, and sometimes cut off from worship or parish life and community life, the first step in having that healing and restoration of our lives is to enter with trust again into that love, into that relationship with Jesus.”

He preached from an ambo draped with the red-on-white cross of the Order of Malta, founded in the 11th century to care for sick pilgrims in Jerusalem. Today the monastic community has a vast lay association whose 13,500 knights and dames – supported by 80,000 volunteers and 42,000 healthcare  professionals – care for the poor, sick and wounded in war zones, slums, disaster areas and forgotten communities in 120 nations. About 250 knights and dames live in the Archdiocese of Los Angeles. 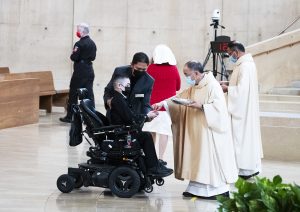 Michael Psomas, president of the Los Angeles location of the Sovereign Order of Malta, came to the Mass after distributing backpacks and jackets at a nearby homeless shelter. The knights have cared for the sick during plagues from the Black Death to Ebola, so it has been a challenge to strike a balance between mission and social distance during the COVID contagion.

“Historically and internationally, we are the ones who rush in,” Psomas said. “We are treating malaria and setting up hospitals in Aleppo when it’s being bombed by the Syrian government.”

Locally, the order created systems for those in self-isolation to serve alongside members going out to encounter those in need. Its vans deliver cases of sanitary supplies to homebound members, who repackage them into hygiene kits for the homeless. Masked members then distribute the kits in shelters and encampments.

On the advice of experts, they are waiting for a one-shot COVID vaccine before inoculating homeless people, who are unlikely to show up for a second dose.

“And then we will go tent to tent to vaccinate here in Los Angeles,” Psomas said.