When Dallas McGowan, a fifth-grader at St. Elizabeth of Hungary School in Altadena, found out his best friend and classmate Mario Ramirez had been shot, he was, according to his mother Denise, “shocked.”

Mario is a basketball playing, Laker loving, video-game enthusiast — in other words, a normal 10-year-old boy. In fact, according to St. Elizabeth principal Phyllis Cremer, Ph.D., Mario was playing a game online with a friend from St. Elizabeth on Valentine’s Day when he told them he had to go do something.

He left, but didn’t come back.

Mario went outside and in a case of horrific happenstance, was caught in the crossfire of a shooting outside his house. He was hit by several bullets and rushed to the hospital. His injuries were life-threatening, doctors said.

Kids being far more plugged in than their parents, Dallas knew the horrible news before Denise. When he told her what had happened, the whole thing was so grotesquely unimaginable, that she snapped at him, “That’s not funny.”

Learning soon after that it was true, she returned to her son, who made a simple request.

He said he wanted to pray for his friend but also for guidance since, as he put it, “I don’t know how to feel.”

Prayer, parents and teachers will tell you, is as much a part of student life at St. Elizabeth as spelling tests and sports.

“This is a parish that prays,” said Laura Navarette, a fifth-grade room parent and friend of the Ramirez family. Her daughter, Yael, and Mario are friends.

“Every morning, students are asked, “Does anybody have anything to pray about?’ They prayed the rosary this summer because of COVID. They learn from the start that if there’s something going on in their lives, they are able to pray about it and pray together. They are very close.

“So when this happened to Mario and his family, we did things like create a donation bank and made cards, but, from the beginning, we prayed.”

Indeed, the St. Elizabeth community has done the other things you’d expect in support of Mario and his family. They helped start a GoFundMe page to help pay for Mario’s medical expenses, including for the extensive rehabilitation therapy that he’s expected to need. They have organized drives to make gift baskets for the family and, more recently, students were asked to create art of the Lakers’ LeBron James to give to Mario — fitting since, on his GoFundMe page, Mario is holding a basketball, wearing a James jersey, and flashing a big smile.

Since the shooting occurred on Valentine’s Day and Monday was a Presidents’ Day holiday, Cremer said she and other school officials could not get to their students until Tuesday to offer support and counseling. What she discovered was that the students had already taken matters into their own hands.

“They did a special Zoom chat [Sunday] night with each other,” she said. “They were able to chat, talk about what they were feeling so, by the time I got to them, they had already started the process.” 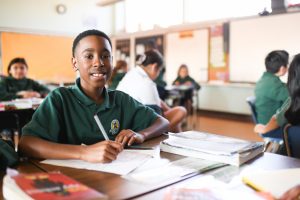 And anyone who’s familiar with St. Elizabeth knows part of the process is prayer.

“Our kids pray. They believe in it, they trust it,” Cremer said. “We had already lost one parent this year, and they pray for that family. Now they pray for Mario and his family.

“But what you have to understand is that this isn’t something they’re just doing now because of what happened to their friend. These kids pray all the time. When we’re doing morning prayers and I’m getting ready to wrap things up, they’ll stop me and say, ‘Dr. Cremer, we have to pray for my neighbor whose house caught on fire.’ This is just who they are.”

St. Elizabeth prides itself on its ability to endure. Cremer is quick to remind people that the school was opened in 1918, in the midst of the Spanish Flu epidemic.

“Resiliency is in our DNA,” she said. “Our kids are resilient. They aren’t wallowing in pity, they’re too busy doing things in service of others.”

Which explains why the school-wide Lenten promise this year was not about giving something up but, Cremer said, “to add love.”

All of that, the prayers and the love, may seem very nice and even the right thing to do, but St. Elizabeth community members will tell you there’s another reason to do it: it works.

A few days ago, while fifth-grade class was being conducted on Zoom, one of St. Elizabeth’s students glanced down to see he had a call. It was Mario. The kid who was facing life-threatening injuries was now well enough to chat with a friend. The friend soon told the rest of the class that Mario was on the phone and put him on speaker.

As Mario begins his long recovery, Pasadena Police are investigating “tirelessly” to find those responsible for the shooting.

Meanwhile, Mario’s classmates are discovering how much prayer is capable of binding them together.

“Without prayer, this could have turned out much different,” Laura said. “The kids are holding on to their faith like you cannot believe and it is making the difference.